Inside the pretty large box are a few standard items you’ll need, as well as a few surprises.

The package has no pictures of the card, but does it really need to – it’s sleek and modern, while hinting at the beast inside. The Devil 13 HD 7990 comes with a three year warranty. 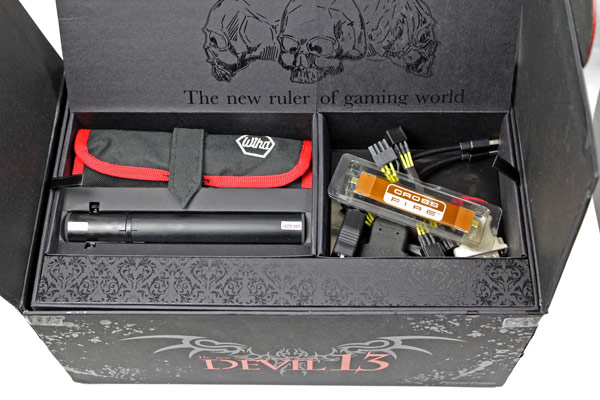 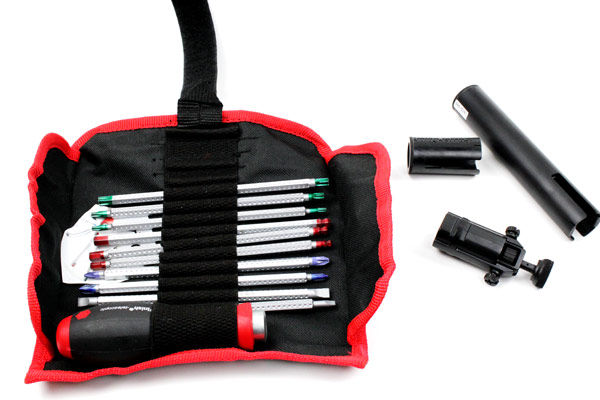 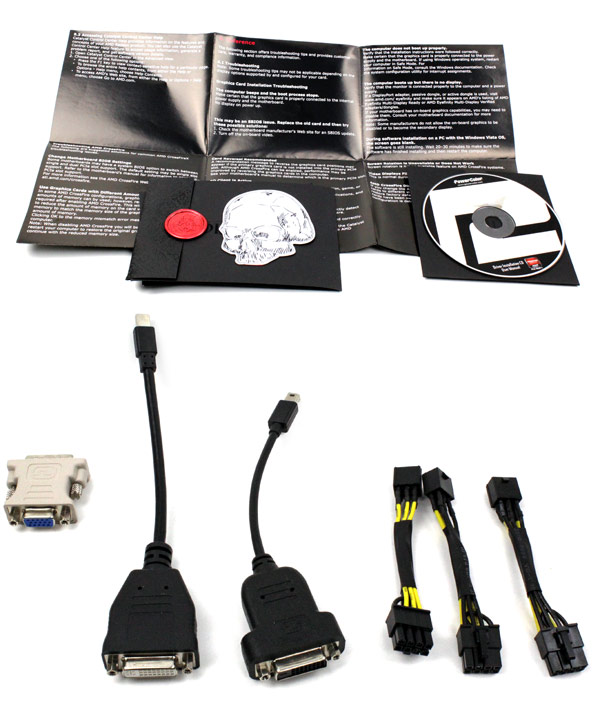 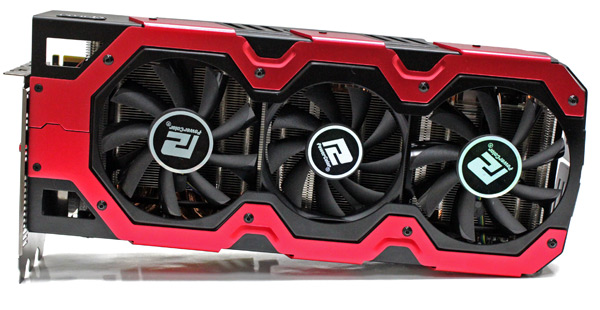 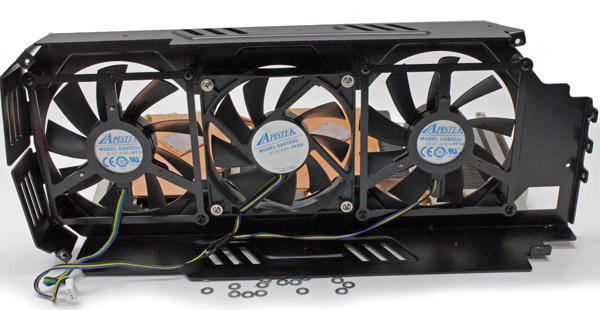 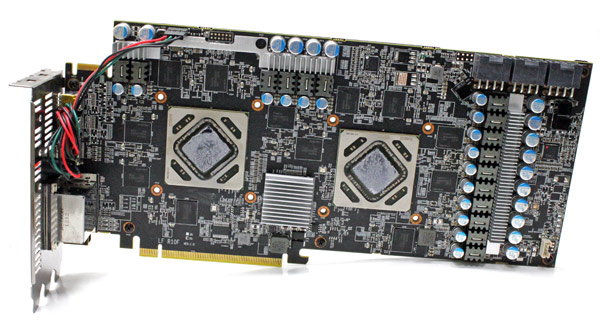 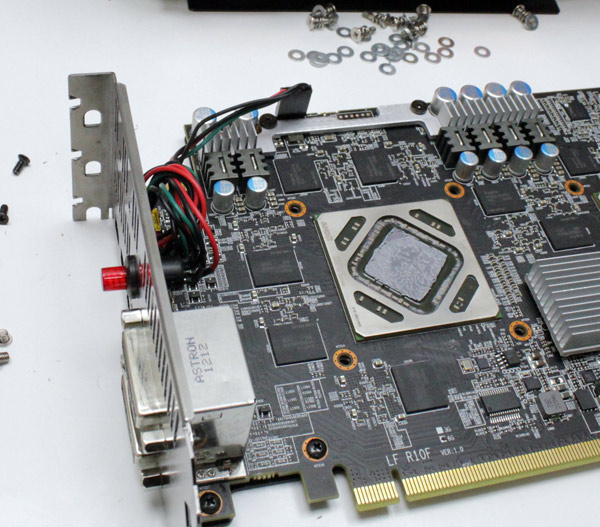 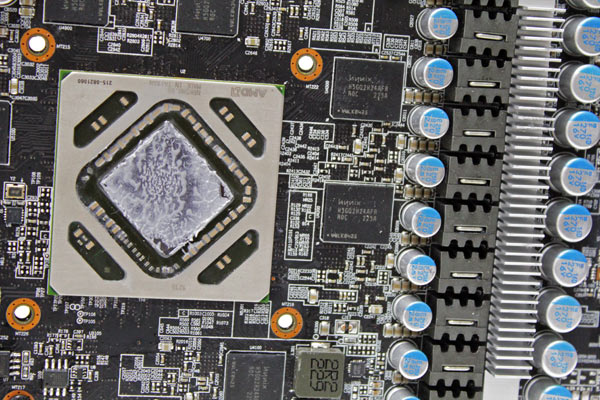 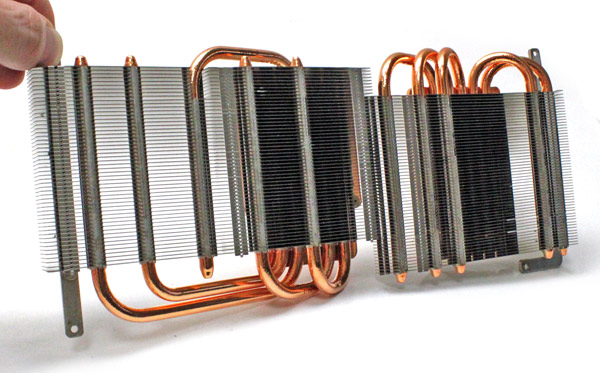 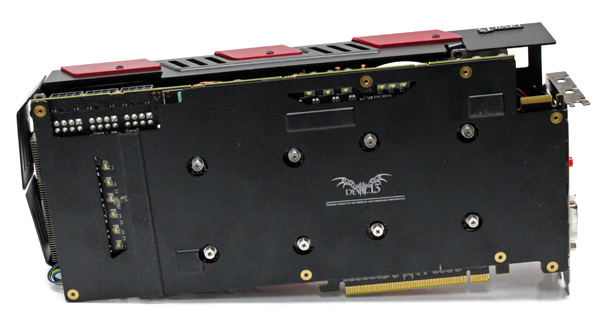 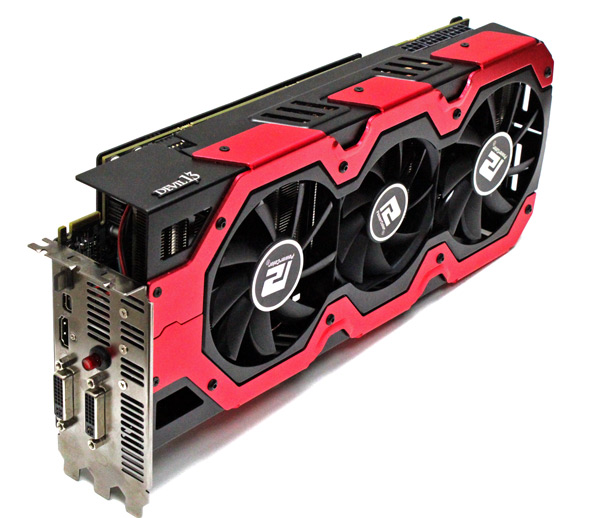 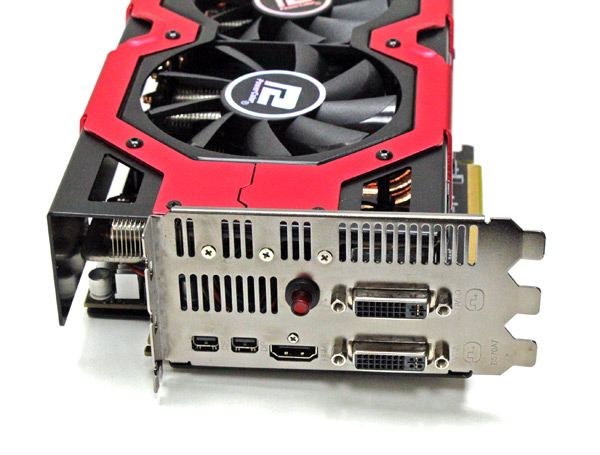 Crysis 2 is one of those games that usually aren’t great with CrossFire. Luckily, AMD addressed this with the latest driver update and it ran well. 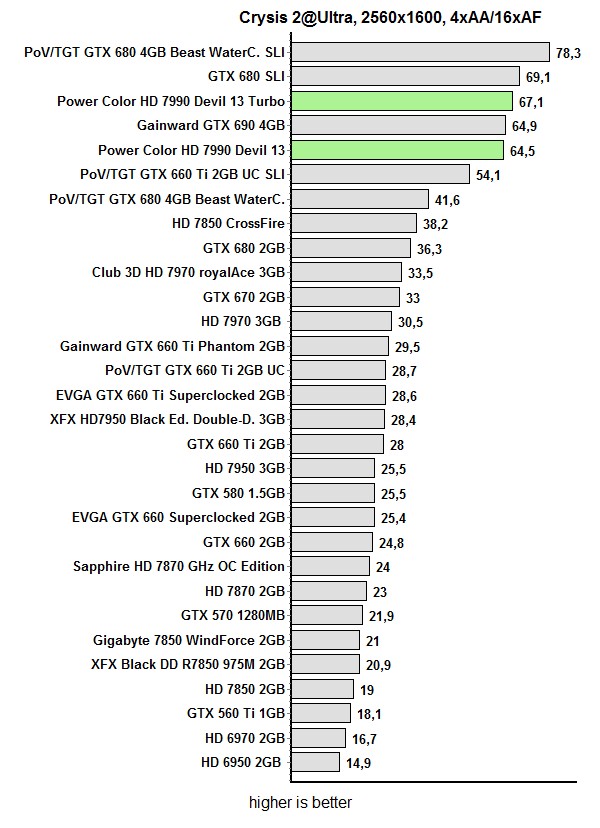 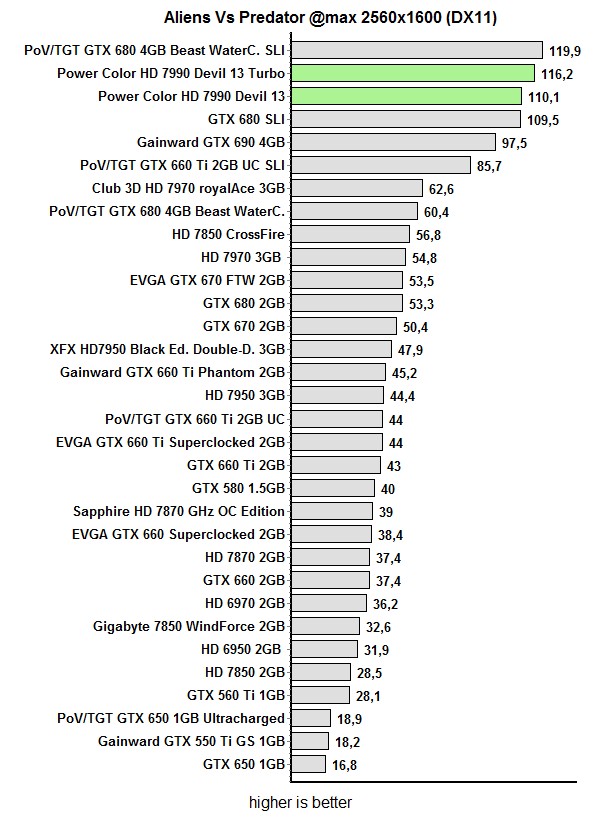 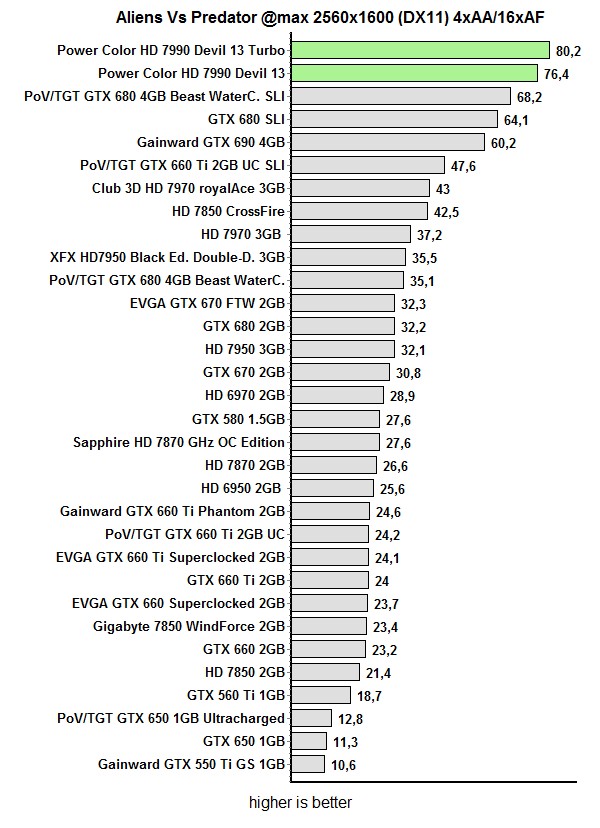 AMD has done plenty of work on drivers lately, so its cards do quite well in many games that previously favored Nvidia. 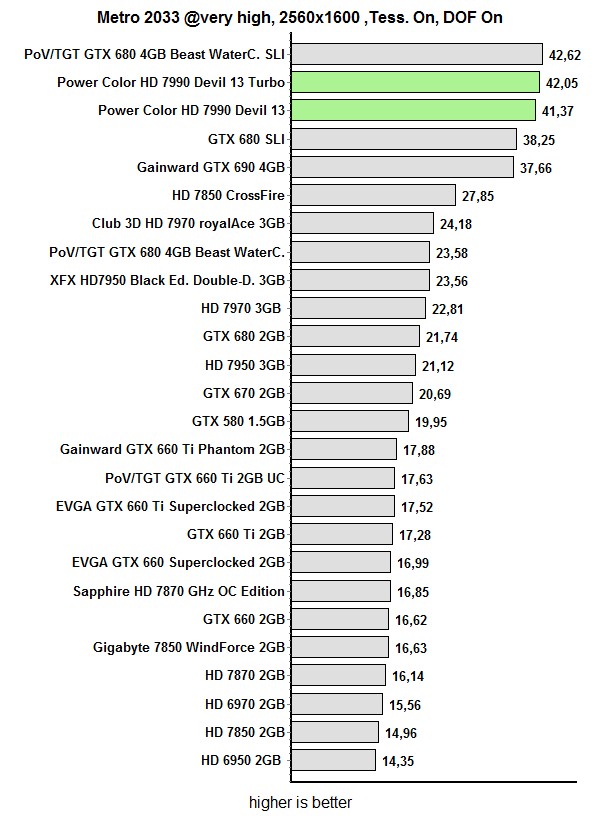 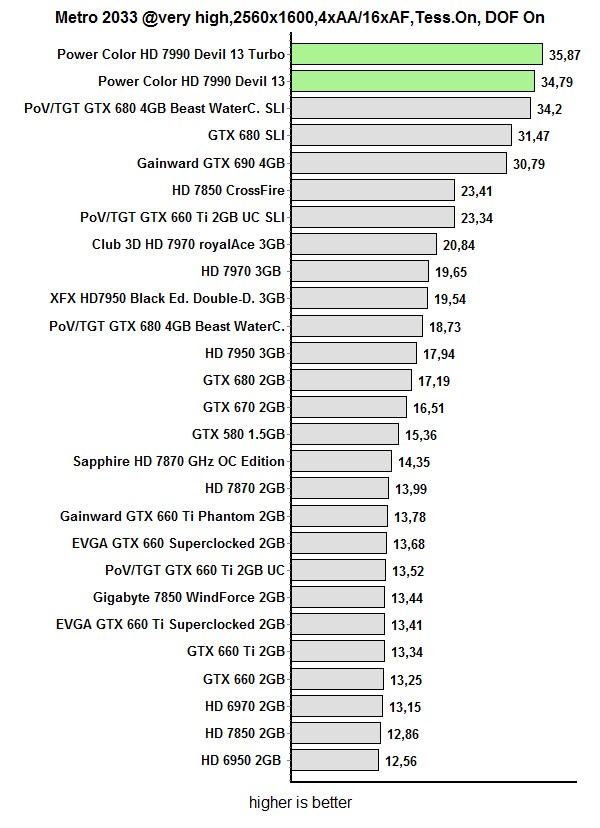 AMD’s cards aren’t slouches in tessellation either, and aren’t far behind Nvidia. 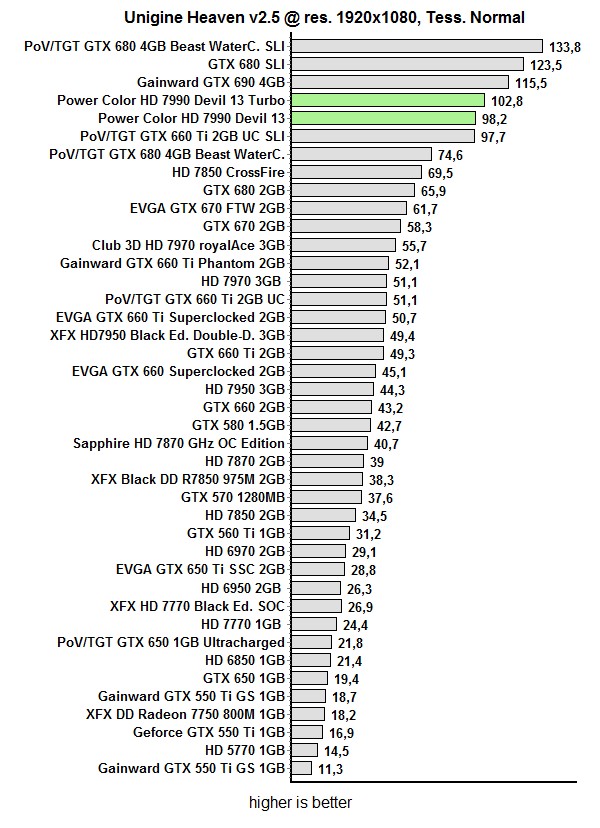 Note that the memory is specified at 1500MHz and we had no trouble upping the clock from 1375MHz to this number. The GPU cooperated quite well too, and we easily overclocked it to 1125MHz without any voltage or fan RPM changes.

PowerColor has its own overclocking tool dubbed the Powerup Tuner, which offers basic options to overclock the GPU, memory or manage fan RPM.

The Devil 13 HD 7990 we received had no issues with GPU thermals, unlike the first batch of these cards that was sent out to reviewers. It’s strange how the problem went largely unnoticed at first, but thankfully it didn’t require redesigning the cooler. Namely, the GPU overheated because the cooler wasn’t tightened enough, but the company solved this by adding extra washers, so retail versions of the card have normal thermals. You can check out the washers below. 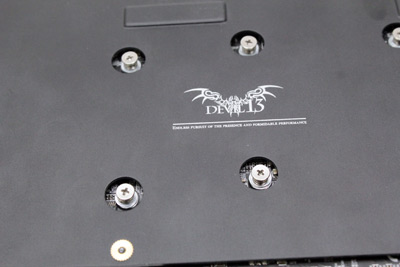 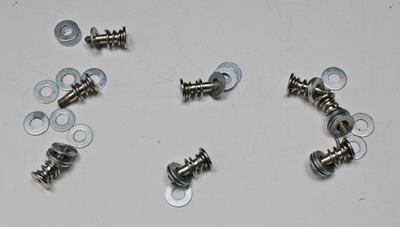 When idle, the Devil 13 isn’t fully inaudible, but you won’t hear it much either. Once the GPU is loaded, the fans will be noticeably loud, but still far from unpleasant because the noise isn’t high pitched. The GTX 690 is quieter although it has dual slot cooling with a single fan. Note that Devil 13 cooler takes up three slots and has three fans. You can manage fan RPM via most popular tools.

If there’s anything good about loud fans, it’s quality thermals. Namely, GPU temperatures didn’t exceed 76°C. After we overclocked the card to 1125MHz GPU and 1500MHz memory, the figure increased by two (78°C).

Power Color Devil 13 HD 7990 graphics card quickly took the top spot when it comes to power consumption. Nvidia’s GTX 690 ended up on average some 50W better than the Devil 13. Once the turbo BIOS switch is activated, the card will consume 10 to 15W more, but this is to be expected as it also involves an 8 percent GPU clock boost. 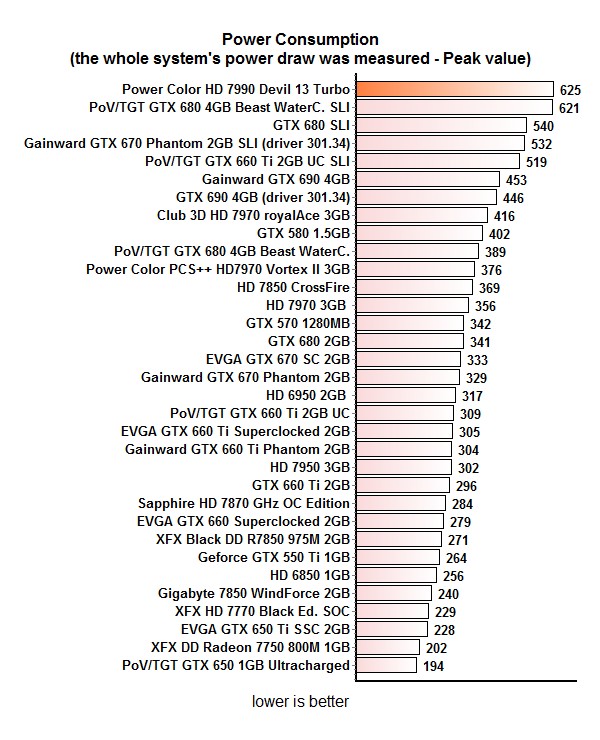 Power Color HD 7990 Devil 13 is the first card to combine two Tahiti XT graphics processors onto a single PCB. We must say we expected AMD to come up with the card first, but it wasn’t the case and many partners are already preparing to launch their own HD 7990 cards. In fact, HIS’ HD 7970 X2 is almost done, so Power Color’s Devil 13 will soon get a worthy opponent from its own family.

The Devil 13’s fiercest adversary though is the GTX 690, which turned out superior in quite a few fields. When it comes to performance, there are no clear cut winners, at least not as decisively as we used to see. The Devil 13 HD 7990 will wipe the floor with the GTX 690 in some games, but the GTX 690 repays the “favor” in others. Nvidia’s champ leads when it comes to silence, consumption and driver stability.

We got the impression that the GTX 690’s SLI runs better than the HD 7990’s CrossFire. However, the latest application profile solves certain CrossFire issues in some games, most notable of which in our case was Crysis 2.

The Devil 13 HD 7990 runs at 925MHz for the GPU and 1375MHz for GDDR5 memory, but switching on turbo BIOS will overclock the GPU to 1000MHz. We didn’t expect much when it comes to further overclocking potential, but overclocking the GPU to 1125MHz was a breeze.

Of course, all that muscle comes at a price and the Devil 13 HD 7990 is the hungriest card we’ve had on our test lately. Due to high power demands, the Devil 13 has three 8-pin power connectors.

The triple-slot cooler looks powerful and does a pretty good job, but we were slightly disappointed with noise levels. The fans, three of them to be exact, are noticeably louder than the GTX 690’s single fan.

The Devil 13 HD 7990 can drive five monitors (up to three DVI displays thanks to bundled active mini-DP-to-DVI dongle).

Power Color made and launched the HD 7990 on its own and this effort should not go unrewarded. It is thanks to this company that we got to see a Radeon with two Tahiti XT graphics processors, while the GTX 690 got itself a worthy opponent.