Seattle is the first AMD ARM based server product and it is on track to ship in the latter half of 2014. In 2015 AMD plans another Cortex A57-based product codenamed Project Skybridge, a 20nm version of the A57-based server chip. AMD is playing it safe as it takes time to launch volume production at a new node.

Since the Seattle Opteron A1100 series is AMD’s first attempt to make a 64-bit ARM product, the company decided to use the mature 28nm process rather than the much riskier 20nm. In 2015 Project Skybridge will replace Seattle 28nm cores and Project Skybridge brings 20nm silicon.

The interesting part is that next generation Puma+ x86 cores and Project Skybridge will be pin compatible and we expect that Puma+ also comes in 20nm process at some point in 2015.

Project Skybridge is a low power part and it will support Google’s Android operating system. We will leave the rest to your imagination. We know that phones, tables and convertibles love Android, but we won't make any predictions what might happen. At this point Project Skybridge is a 20nm A57 based 64-bit server part. AMD has not said much about consumer ARM parts. For the time being the focus is solely on server parts. 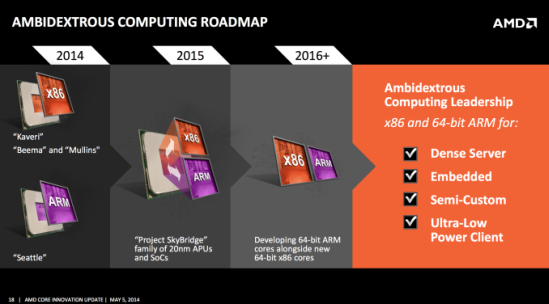 2016 brings an interesting product codenamed K12. AMD didn’t release many details, but this is a custom 64-bit ARMv8 core. The custom ARM core approach has been used by many other companies and the most notable cases are Apple with the A7 CPU, Qualcomm with its Krait cores and Nvidia with Denver.

Only servers, for now

AMD will make a custom core that is supposed to be better than the A57, that is the general idea behind building custom core. AMD is developing 64-bit ARM alongside with 64-bit next generation x86 cores, so PC and notebook lovers have nothing to fear. There will be many APUs from house of AMD to run your PCs, notebooks and hopefully some x86 tablets as well.

AMD wants to address dense server, embedded, semi-custom and ultra-low power client market. This is quite ambitious but AMD is the only player that can create solutions in x86 and ARM architecture. Intel, Qualcomm or any other companies can do one or the other, not both of them.

Both Project Skybridge and K12 will have a graphics part and HSA support making them even more attractive in server and compute markets. We will see what happens, but AMD’s server roadmap is promising and can bring AMD back some market share, and win a slice of the ARM server market in the future.

Rate this item
(2 votes)
Tagged under
More in this category: « Mobile Kaveri tips up in HP laptop AMD leaks mobile Kaveri line-up »
back to top