Apple's new A6 has triple-core GPU


Anandtech managed to get their hands on first diffusion images of the new Apple A6 SoC provided by UBM TechInsights, which shows that Apple's A6 is actually a triple-core GPU solution rather than quad-core seen on the A5x in the new iPad.

It has been known for quite some time that Apple is using a custom made 1GHz dual-core ARM CPU for its iPhone 5 but the actual GPU inside the SoC was still a mystery. In addition to a couple of details regarding the GPU and memory channels, the first diffusion images show an estimated die size of 95.04mm2 and reveal that Samsung is actually the manufacturer of this SoC.

The most important detail revealed by the picture are the actual details about the GPU inside Apple's A6 SoC. It appears that Apple went for the PowerVR SGX543MP3 triple-core rather than the PowerVR SGX543MP4 seen in the A5x. The GPU is running at 266MHz. These specs are apparently enough for Apple to reach the previously announced "double the graphics power of the A5 chip".

You can check out more over at Anandtech.com. 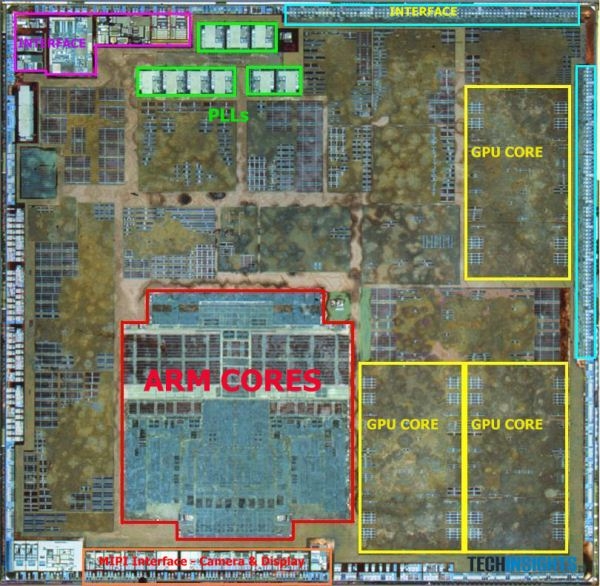