The new Sapphire HD 7950 Mac Edition, based on AMD's GCN architecture, will bring a new level of graphics perfomance improvement to Mac Pro users in a wide range of applications including gaming, audio or video editing and content creation. According to Sapphire, the HD 7950 Mac Edition will bring over 200 percent improvement in games, up to 30 percent in general benchmarks and up to 300 percent in graphics intensive benchmarks when compared to the Nvidia 8800GT which is commonly used in Mac Pro systems.

Although there are no precise details regarding the clocks, Sapphire noted that the card comes with 3GB of GDDR5 memory and delivers up to 2.87 TFLOPS of single precision compute power as well as hardware support for Open GL 4.2, Open CL 1.2 and AMD HD3D tech and APP acceleration. It also comes with all advanced post-processing and scaling operations, courtesy of AMD GCN architecture, including de-blocking de-noising, automatic de-interlacing, Mosquito noise reduction and edge enhancement as well as advanced image quality enhancement technology, such as adaptive anti-aliasing and 16x angle independent anisotropic texture filtering.

It features two mini DisplayPort outputs with a maximum reoslution of 3840x2160 per display under Mac OSX as well as a Dual-link DVI port with HDCP (2560x1600) and 3GHz HDMI 1.4a port (3840x2160 maximum resolution). As noted by Sapphire, the new HD 7950 Mac Edition works on all Apple Mac Pro models from 2010 with an available PCI-Express x16 slot and needs two 6-pin PCI-Express power coonectors that are supplied with the card.

For those PC users that simply like the look of the new HD 7590 Mac Edition, Sapphire decided to include a dual BIOS switch that switches between non-UEFI MAC OS X/Windows BIOS and UEFI hybrid BIOS for Windows.

Unfortunately, Sapphire did not shere any details regarding the price or the availability date. 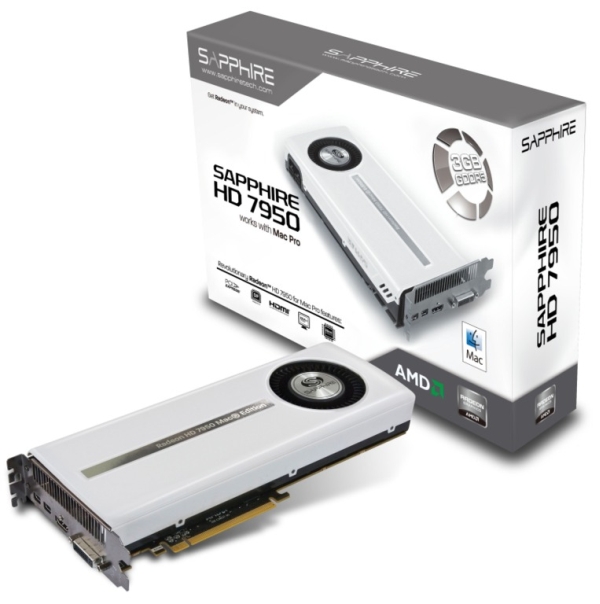 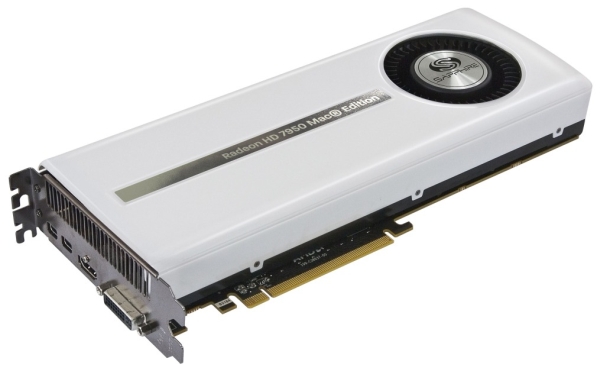 Last modified on 19 March 2013
Rate this item
(0 votes)
Tagged under
More in this category: « AMD brings HD 7790 launch forward Nvidia updates its GPU roadmap at GTC 2013 »
back to top