Follows in the footsteps of New Zealand

During its GDC 2013 press event, AMD decided to show off its new Radeon HD 7990 graphics card, codename Malta, in its reference form.

According what we can see from various pictures all around the net, the new Radeon HD 7990 will be following in the footsteps of New Zealand based HD 7990 graphics cards that we had a chance to see from TUL and its Powercolor, VTX3D and Club3D partners as well as the Asus' Ares II graphics card.

The new HD 7990 graphics card feature dual-slot cooler design with no fewer than three 90mm fans. In this case, the triple-fan cooler does not sound as an overkill considering that it needs to cope up with two GPUs, bridge chip and a hefty VRM that is needed to power all of that.

PCWorld.com managed to snag a screenshot from the official preview slide and according to Matt Skynner, general manager of AMD graphics business unit, the card is whisper quiet thanks to the triple-fan cooler. One thing that caught our eye is the fact that it needs two 8-pin PCI-Express power connectors which makes it less hungry than for example Powercolor HD 7990 Devil 13 graphics card.

You can check out more here. (via Techpowerup.com). 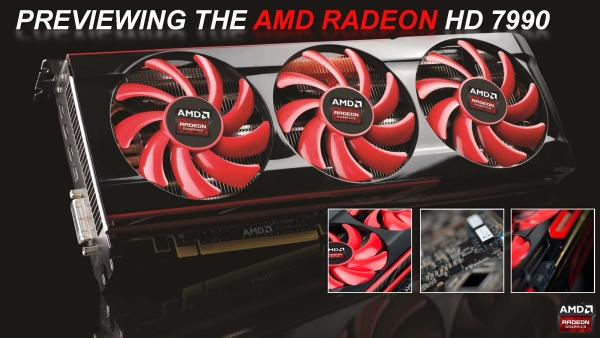 Last modified on 27 March 2013
Rate this item
(0 votes)
Tagged under
More in this category: « Malta is Radeon HD 7990 AMD announces Sky Series GPUs for cloud gaming »
back to top