Shows up in GFXBench results

Although we already wrote a while back that Microsoft's next Surface 2 will be based on Nvidia's Tegra 4 SoC, the recent appearance in GFXBench's results page confirms the information. Scheduled to be released sometimes this year, Microsoft's Surface 2 tablet will be running on the Windows 8.1 RT OS.

In addition to the Nvidia Tegra 4 SoC, the result page also shed some light on some other specifications, including a 1371x771 resolution screen. There has been some rumors regarding a full HD tablet that will be powered by Qualcomm's Snapdragon 800 chipset as well as smaller 7-inch Surface, which could be the one that showed up in GFXBench results considering its "lower" resolution.

Of course there are still a lot of unknowns but good news, for Nvidia at least, is that we will see at least some devices based on the Tegra 4 SoC as it did not have a smooth ride so far.

You can check it out here. (Via Webtrek.it.) 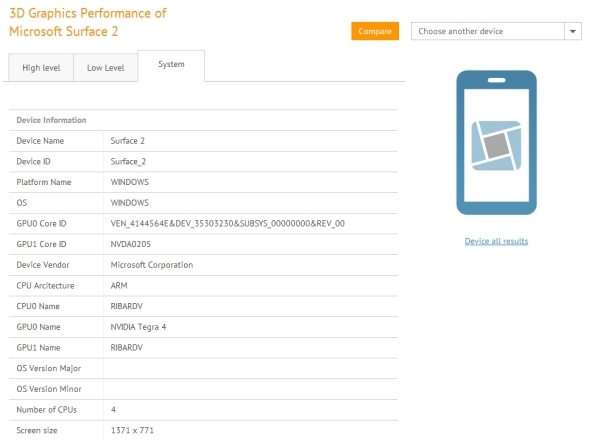