AMD’s new Hawaii cards are expected to hit retail in a couple of weeks and there’s still quite a few unanswered questions – the price of the R9 290 or Hawaii Pro card is one of them.

As the launch draws near, we’re seeing the first listings in Europe, but many retailers don’t appear to have the full picture yet, either. We came across three cards from XFX, PowerColor and MSI. However, the full spec has not been revealed, so this is what the listings claim – although we can’t confirm these numbers. The GPU clock is 800MHz, boost clock is 947MHz and the memory clock is 1250MHz, which translates to 320GB/s of bandwidth and 4096GFLOPS.

It’s apparently ships with 2,560 shaders, down from 2,816 on the XT version and it’s supposedly got 160 TMUs and 64 ROPs. Obviosly, take these numbers with a grain of salt.

Now for some bad news. The early list prices are not very encouraging. Prices start south of €500 – the cheapest MSI R9 290 4096MB GDDR5 is listed for €473, another shop is pricing it at €499, while three shops are closer to the €550 mark. PowerColor’s R9 290 OC 4096MB is priced at €499 and €511 in two shops. We will not include the links or exact product numbers for obvious reasons. What about the availability date? One retailer pinned it down for October 24, while the others are saying two to three weeks (standard placeholder). 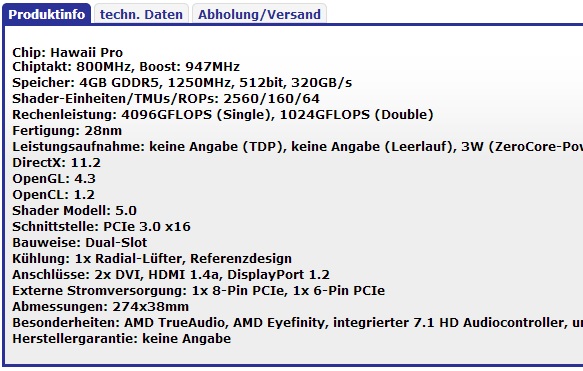