The GTX 780 Ti is Nvidia’s new flagship graphics card and we all know AIBs like to show off when it comes to flagship products. While most AIB partners are offering one or two GTX 780 Ti cards, EVGA is going a step further, or a few steps. EVGA has no less than five different GTX 780 Ti cards and today we will take a look at one of them – the GTX 780 Ti Superclocked with ACX Cooler. EVGA decided to set the base GPU clock at 1006MHz, which is significantly higher than the 876MHz reference clock. 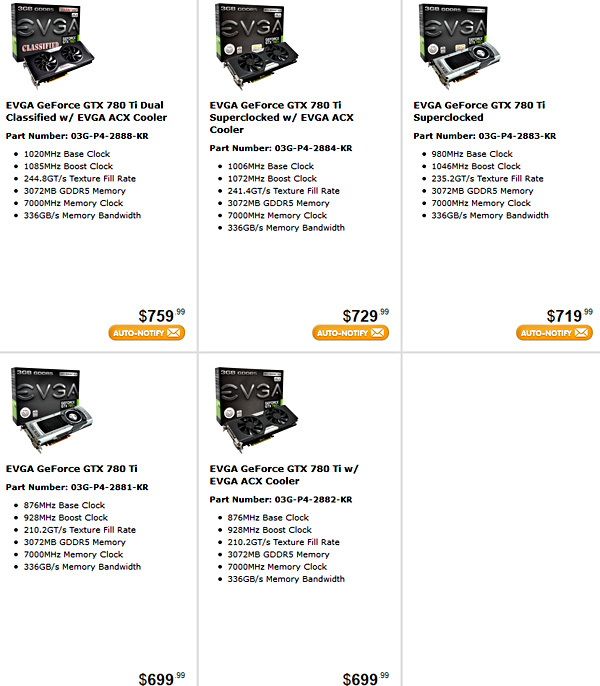 Note that the GTX 780 Ti Superclocked w/ACX is listed on the EVGA web shop for $729, which does not sound like a big price premium for such a hefty factory overclock. However, in Europe you will have to pay a bit more, roughly €70 to €80 more than the reference card to get the Superclocked, which starts at €674. Factory overclock raises the GPU clock by 130MHz but the memory is still running on reference clocks, i.e. 7000MHz (effective GDDR5). This is typical for EVGA, since the company rarely overclocks memory.

Before we move to test results let’s refresh our memory. Nvidia launched the GK110 in May as the Geforce GTX 780 that came with 2304 CUDA cores, 863MHz base GPU clock, 192 texture mapping units (TMUs), 48 render output units (ROPs) and 3GB of GDDR5 memory running on a 384-bit memory bus.

Specification wise the GTX 780 ended up with 50% more CUDA cores than its predecessor, the GTX 680, and this among some other things gives the GTX 780 card a significant performance boost, although the GK110 is based on the Kepler architecture used in the GTX 680. The GK104 chip used in the GTX 680 has 1536 CUDA cores. The memory bandwidth got increased, too, thanks to the wider 384-bit bus. The GTX 780 has a 384-bit bus while the GTX 680 is limited to a 256-bit interface, but the memory speed on both cards is 6008MHz.The frame buffer was increased from 2048MB to 3072MB of GDDR5 memory.

Important new features announced alongside the GTX 780 Ti are ShadowPlay, an automatic game recorder that uses GPU encoding and it comes with Geforce Experience 1.7 and higher. Shield PC streaming as well as G-Sync are supported as well. These new features should help add a bit more appeal to the GK110. G-Sync can synchronize Geforce Kepler cards and your G-Sync capable monitors, which are expected to ship in early 2014. This technology will eliminate frame stuttering and tearing due to a lack of synchronization between your graphics card and monitor, but it requires a new G-Sync enabled monitor and works only on Kepler cards, GTX 780 Ti included. The Geforce GTX 780 Ti also features the same GPU Boost 2.0 technology used in the Geforce GTX Titan, with more advanced controls for auto-overclocking, fan control, and hardware monitoring. 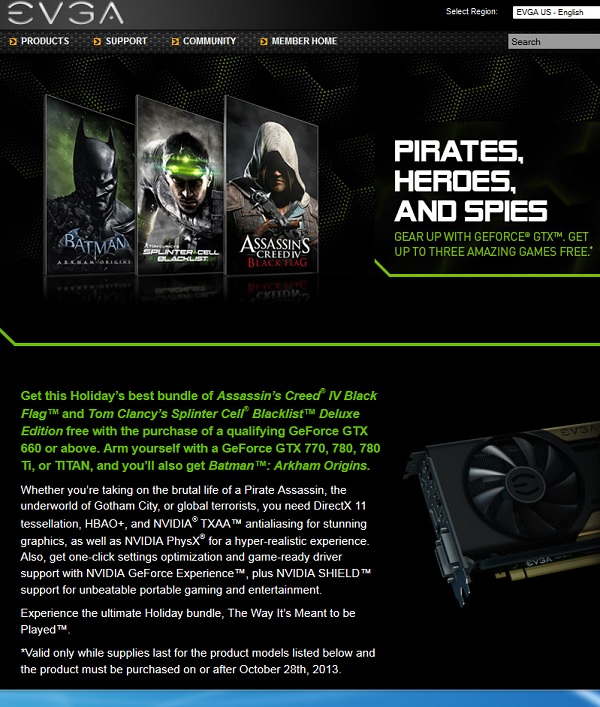