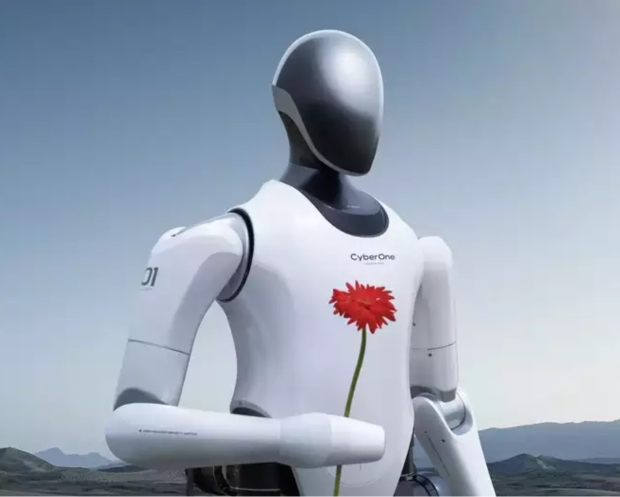 Chinese tech giant Xiaomi has revealed the country’s first humanoid robot and it costs a fortune.

The company launched the CyberOne along with its foldable phone. The humanoid robot was seen with the company’s chief executive officer Lei Jun on stage. The robot handed a flower to Jun on stage although we suspect the chance of anything like romance with this model is unlikely. If only if it walks like someone who is busting to go to the loo.

Xiaomi has said that the CyberOne has been fitted with advanced arms and legs that support bipedal-motion posture balancing. The company has also claimed that the humanoid has a high emotional quotient, can detect human emotions, and has advanced vision capabilities.

It has two microphones and two cameras, allowing it to hear and see in three dimensions. The microphones analyze human vocal expressions and can detect 45 different emotions which is more than many Americans who have yet to master sarcasm .

CyberOne weighs 52 kg which is not bad for someone who is 177 cm. It can walk at a speed of 3.6 km per hour and grip objects while it walks. However, each CyberOne will cost $103,821 making it out of the league of most humans.

It also shows how silly Elon Musk's claim to have an affordable robot servant in everyone's home by the end of next year are. Musk claimed Tesla was working on a robot named Optimus, which will be launched in 2023 and it would be “worth more than the car business.”

https://twitter.com/i/status/1557720705747210242
More in this category: « Mercury says that Intel is in trouble UK government considers reducing cost of poor people's internet connections »
back to top