Although Intel is not exactly in the tablet business, the chipmaker did release a couple of Intel Education tablets earlier this year, based on old 2000-series Atom parts.

Now though it has something a bit bigger and more serious. The Intel EA-C22L is powered by a Celeron 1007U processor, an Ivy Bridge dual-core that is already used in a number of cheap ultraportables and nettops. It is paired with 4GB of RAM and a 64GB SSD. This is not bad at all, as most cheap Windows 8 tablets ship with 2GB of RAM and sluggish eMMC storage.

There are a few downsides. It is huge, measuring 302x196x13.5mm and tipping the scales at 950g, more than two pounds for those that don’t like the metric system. Despite the bulk, it packs a 6000mAh battery, which doesn’t sound like much given the spec. It has an 11.6-inch 1366x768 screen, Micro HDMI, a/b/g/n wireless, Bluetooth 4.0, microSDHC slot and a couple of cameras.

The price is pretty good, too. At €350 it is very cheap as far as Windows 8 tablets go and it is on par with most Bay Trail Windows 8.x tablets. It might not be a volume product for mainstream consumers, but there are a few niche uses that could work, particularly in a small business environment. 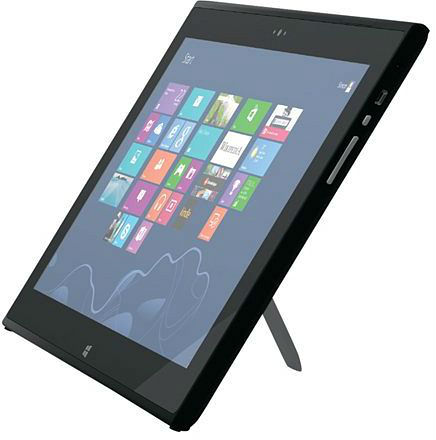 Oh, did we forget to mention that it's ugly?

Last modified on 03 December 2013
Rate this item
(0 votes)
Tagged under
More in this category: « Intel to throw $1 billion at tablets $599+ Ultrabooks getting touch »
back to top