Xilinx Alveo U50 adaptable compute is out 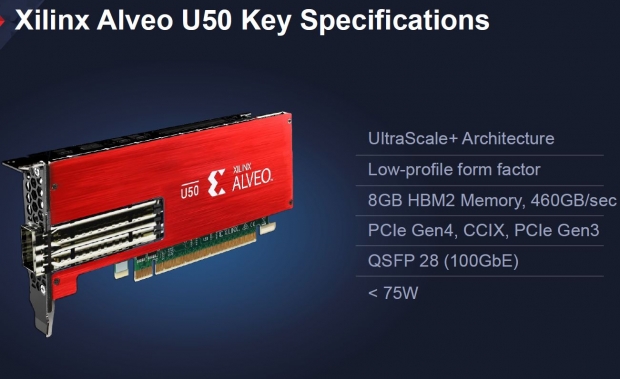 Wins against Xeon and Tesla

Xilinx has a data center first strategy that Victor Peng and his team are executing flawlessly so far, and part of that plan is to launch an adaptable compute, network and storage card and call it Alveo U50.

The card sounds like a Swiss penknife that solves a lot of critical data center centric problems, and on top of software versatility, it also supports adaptable hardware with FGPGA brain. Jamon Bowen, Data Center Compute and Storage Segment Marketing Director for Xilinx, spent some time to talk about the U50 and its advantages over the competition.

The Alveo U50 is an industry-first low-profile adaptable accelerator with PCIe Gen 4 support managing to address a broad range of critical compute, network and storage workloads, all on one reconfigurable platform. U50 is still not Versal, this is still an UltraScale+ chip, but it is able to fulfill its need and win against modern Intel data center CPUs as well as Nvidia Tesla cards.

Xilinx’s secret weapon is incredibly low latency and extreme power efficiency and flexibility to deploy to either on-premise or cloud. Alveo U50 delivers between 10-20x improvements in throughput, latency, and power efficiency. For accelerated networking and storage workloads, the U50 card helps developers identify and eliminate latency and data movement bottlenecks by moving to compute closer to the data.

Apart from the UltraScale+ processor, the Alveo U50 card is the first half-height, half-length form factor, and low 75-Watt power envelope. Power is traditionally lower than 75W as this number represents the peak power for some extreme use cases. The U50 card packs 8GB HBM2 with 460 GB/s bandwidth and comes with QSFP28 interface capable of 100 Gbit Ethernet as well as IEEE 1588 clock precision. Alveo U50 is a PCIe Gen 3 16 or dual PCIe Gen4 x8 card that supports CCIX. The 75W TDP is achieved with a passive cooler.

Machine learning inference, video transcoding and data analytics to computational storage, electronic trading and financial risk modeling and some of the tasks where Alveo U50 brings programmability, flexibility, and high throughput and low latency performance advantages to any server deployment.

Below are some of the examples Alveo U50 accelerated solutions manage to deliver significant customer value across a range of applications, including:

Chatting with Jamon Bowen caught us quite by surprise that in deep learning inference acceleration (speech translation) U50 can beat Nvidia Tesla T5 scoring 25 times lower latency and ten higher throughput. Below is an example of high throughput and low latency interface acceleration.

Alveo runs two batches while Nvidia has to run eight batches of data, hence adding significantly to the overall latency. The score measured in Transformer NMT (Symbols/second) was ten times in Xilinx’s U50 favor compared to the Nvidia Tesla T4 GPU.

Another example is high throughput query acceleration measured in queries per hour speedup. Intel Xeon Platinum 8260 processor with 35.75M Cache, 2.40 GHz 24 core was the 1X base. One Alveo U50 card was 4.5 times faster. Intel Xeon Platinum 8260 CPU query time was 210ms, scoring 34k queries per hour. Xilinx AlveoU50 has a latency of 24ms and managed to score 150k query per hour.

Ultra-Low latency networking is something that electronic trade operations benefits from and Alveo U50 managed to achieve 20 times latency reduction over the CPU based solution. The overall T2T latency was less than 500 nm with deterministic performance. CPU based solution needs 10 microseconds for the same market data to TCP message.

Compared to Intel Skylake-SP 6152 at 2.10GHz CPU running Ubuntu 16.04 Alveo U50 can offer 20X improvement in compression/decompression. The test shows results based on GB/s compression per code while Alveo U50 performance is estimated at stable 10GB/s and 2:1 compression. 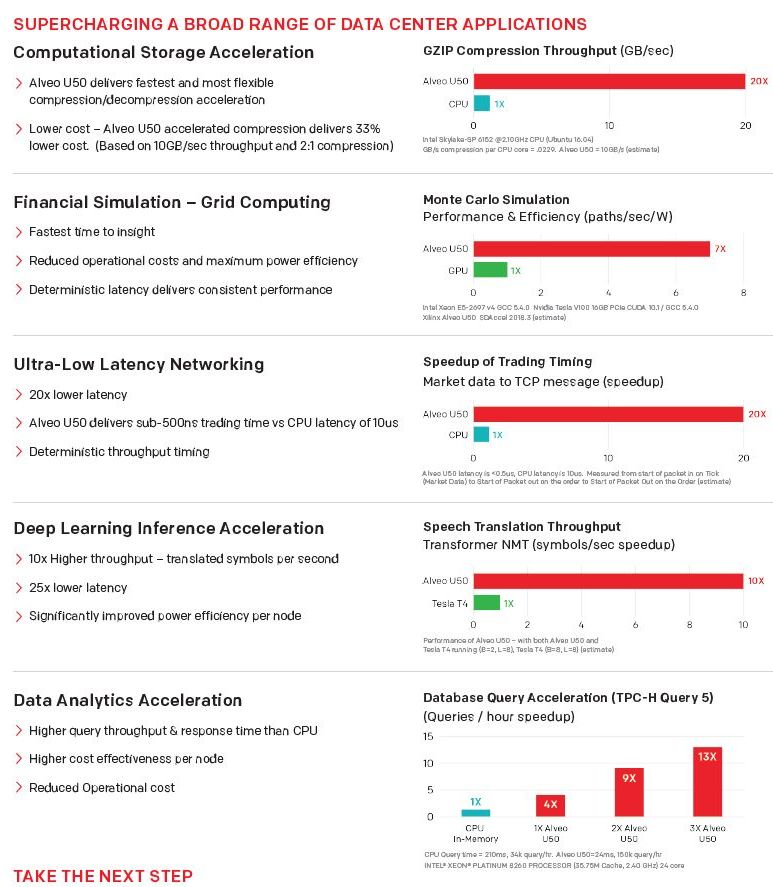 “Ever-growing demands on the data center are pushing existing infrastructure to its limit, driving the need for adaptable solutions that can optimize performance across a broad range of workloads and extend the lifecycle of existing infrastructure, ultimately reducing TCO”, said Salil Raje, executive vice president and general manager, Data Center Group, at Xilinx. “The new Alveo U50 brings an optimized form factor and unprecedented performance and adaptability to data center workloads, and we continue to build out solution stacks with a growing ecosystem of application partners to deliver previously unthinkable capabilities to a range of industries.”

AMD is excited about this product as it is the only CPU player in town supporting PCIe Gen 4 on the EPYC side and IBM seems to be very interested in the Alveo U50.

The Alveo U50 is sampling now with OEM system qualifications in due process. General availability is slated for fall 2019.