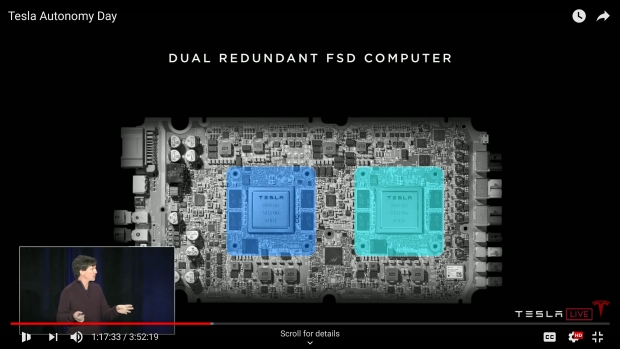 Tesla has shared a vast amount of details about its FSD (Full Self Driving) dual SoC 14nm computer and said that the 12 ARM core chip has a modest GPU, a custom neural network compute part, while the SoC packs 250 million gates, 6 billion transistors at 260 mm2. More importantly, Elon addressed Tesla’s apparent desire to stay away from Lidars.

The FSD compute component is being custom designed in house by Jim Keller and more recently Pete Bannon, according to a Tesla presentation still leaves Nvidia’s solution in the dust at lower power. Nvidia was always great for high end fastest things around but never figured out how to make the ARM-based power-efficient design as GPUs are traditionally power hogs. Nvidia Tegra for phones and tablets had high GPU performance but failed to compete on power consumption and the same trend seems to translate to the automotive industry efforts too. This is why Jim Keller and Pete Bannon, ex PA semi / Apple executives did a great job on a low power, high performance as Elon's car runs on batteries and really want to extend the range as far as they can.

Elon is an emotional leader who has got in trouble for that before, but it was clear that Tesla under his leadership would not jump on the Lidar bandwagon. When asked if the FSD new Tesla self-driving computer can support inputs like Lidar, Elon replied that it is an expensive and yet unnecessary sensor and compared it with an appendix in a human body. Having multiple Lidars would be as useless as having numerous appendices. He painted a clear picture, and it is clear that Waymo and many other Tier 1 automotive companies disagree.

Lidar gives military precision and can make the whole system safer, but Elon believes that Tesla can do an as good a job with its eight cameras, ultrasonic sensors, maps, and GPS that the current Tesla fleet has.

Anyone relying on Lidar is doomed

Elon went one step further and made things crystal clear. He believes that anyone relying on Lidar is doomed. It is hard to argue that Lidar is one expensive sensor that targets more expensive vehicles, the ones that Tesla S and X are targeting. Another comparison, as if the two dramatic examples above were not enough and unclear, was that Lidars are Fool’s Gold.

It is no secret that Tesla is trying to save as much money on the Model 3 to make it affordable and come up with an interior design wrapped around a single tablet and nothing else on the dashboard. It represents minimalistic and yet the cheapest possible option too. Tablets and the SoC to run them are not expensive these days.

Over the air update

One key advantage that Tesla has over most of its competitors are over the air software updates. The car gets new features with upcoming software releases and makes things better. From many talks we conducted with automotive chip industry executives over the last few months, they all agree that this is game-changing things. Over the air updates will be part of most automotive companies in the future.

Tesla FSD hardware is part of the all new Tesla S and X as of March and Tesla 3 as of April and will offer a better driving experience compared to Hardware 2.5 based on Nvidia Drive PX 2 and available since the latter part of 2017. Two Denver 2 ARM-based cores and four Cortex A57 ARM cores with Pascal GPU are not comparable with the amount of computing that FSD offers.