GigaDevice takes on ARM in China 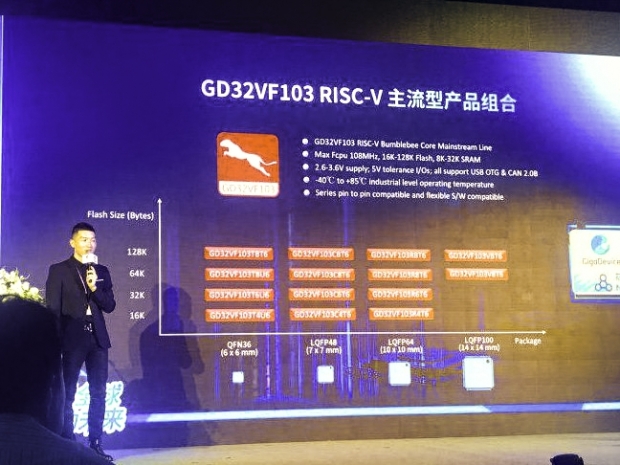 Trade war tech could be the birth of  RISC-V IoT

While the US government conducts its pointless and non-effective Trade Ware against China, the people behind the bamboo curtain are looking at ways to replace Western tech in case things get ugly.

GigaDevice has launched what it claims is the world’s first general-purpose microcontroller (MCU) based on RISC-V, a device aimed at the Internet of things (IoT) market.

The move is essential because it is effectively taking a stab at ARM. So far the company has been providing technology which replaces Arm-based GD32 MCUs originally designed by ST Microelectronics.

GigaDevice similarly claims “complete compatibility” between its new GD32V RISC-V microcontrollers and the classic GD32 series of MCUs based on Arm.

Ironically GigaDevice executives stressed that the company remains a strategic partner with Arm. Adding the RISC-V line is all about providing options.

The work stepped up when President Donald [Prince of Orange] Trump started placing export controls on western technology, including Arm intellectual property (IP). RISC-V is an open-source technology, however, and not subject to similar restrictions; it represents a readily accessible alternative for Chinese manufacturers to control their technological destiny.
RISC-V offers flexibility, but then there is the inevitable question about the lack of a supporting ecosystem. RISC-V’s ecosystem is somewhat limited, especially compared to those enjoyed by MCUs based on the widely-available Arm and X86 architectures.

However, the thinking is that the lack of a RISC-V ecosystem is less of an issue when addressing the Internet of things – virtually an emerging set of new embedded markets. RISC-V is at much less of a disadvantage versus Intel and Arm than it would be in other, more mature markets, such as mobile, desktops, and servers.

The first line of GigaDevice MCUs will bear the designation GD32VF103. The range is aimed at “mainstream development requirements.” At the introduction, the company listed 14 configurations of the 103. Each is built on the Bumblebee 108MHz core designed in cooperation with Nuclei System Technology.

The main differences in the 14 models are different amounts of flash memory capacity and four different package options. The GD32VF103 series MCU has a performance of 153 DMIPS at the highest frequency and a score of 360 points in the CoreMark benchmark test, which the company claimed was 15% faster than the GD32 Arm-based core, while also consuming half the power.

According to EE Times China, the 103 includes: