Comscore has released their latest data on U.S. smartphone owners for the three months leading up to November, 2010. It says that 61.5 million people, up 10 percent from the preceding three-month period, own smartphones in the U.S. 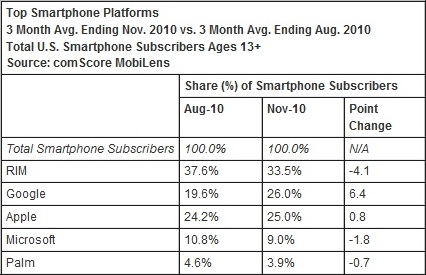 Google which has been gaining ground over the last year, and has captured the number two ranking among smartphone platforms.  As of November Google had a 26.0 percent marketshare of U.S. smartphone subscribers.  Android has grown from 19.6 perecnt in August 2010 to 26.0 percent or 6.4 percent.

Apple has slipped into third place and accounted for just 25.0 percent of smartphone subscribers gaining only 0.8 percent.

Microsoft lost 1.8 percent and receded downward from 10.8 to 9.0 percent, while Palm lost 0.7 percent from its previous standing of 4.6 percent settling into last place to 3.9 percent in November.  The current trend shows that Google is on a sharp expansion, and that it will surely continue in the upcoming months.