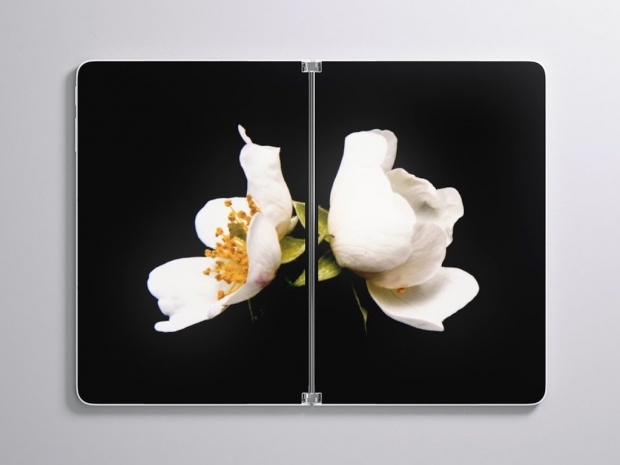 In addition to new Surface 2-in-1s and laptops that are already available for pre-order and should be shipping later in October, Microsoft unveiled two interesting dual-screen devices that will be coming in late 2020, the Surface Duo and the Surface Neo.

Microsoft apparently thinks that it is too early for devices with foldable screens, so both the Surface Duo and the Surface Neo are dual-screen devices with a 360-degree hinge, which makes the device foldable but comes with a center hinge and border, something that does not look that good in some scenarios, especially if you push content across both screens.

Microsoft goes back to phones with Android-based Duo

While Microsoft was keen to note that it does not want to call the Surface Duo a phone, it is a smaller device with two 5.6-inch screens, which unfolds to an 8.3-inch device, and it makes calls, sends texts, as well as using the Android OS and currently comes with smartphone-oriented Qualcomm Snapdragon 855 SoC, so it is closer to a smartphone than to any other device.

According to Microsoft, the Surface Duo brings together the best of Microsoft productivity experiences, Surface hardware design, and Android app, all in one single device that can fit in your pocket.

According to Wired, the current prototype is running on a modified version of Android 9 OS and it is powered by Qualcomm's Snapdragon 855 SoC. It is not clear if Microsoft will keep the same hardware as we are still far away from the launch date.

Surface Neo is a dual-screen tablet with Windows 10X

Unlike the Surface Duo, which is close to a smartphone, the Surface Neo is a bigger device, running on Windows 10X, a version of Windows 10 OS for multi-posture dual-screen PCs. While Surface Neo is one of the first devices, Microsoft says there are more coming from Asus, Dell, HP, and Lenovo.

According to details provided by Microsoft, Surface Neo has two 9-inch screens, which fold out to a device offering an equivalent of a 13.1-inch screen. This allows it to be used as a big tablet, small PC, or whatever developers think of next. It will have Gorilla Glass on the front and back and will support both pen and keyboard.

Unlike the Surface Duo, the Surface Neo, as announced by Intel as well, will be powered by Intel's 10nm Lakefield hybrid CPU, which combines power-efficient Tremont CPU cores with performance-oriented Suny Cove core, all packed with Foveros 3D packaging technology, giving it a small 12x12x1mm footprint.

"The innovation we've achieved with Lakefield gives our industry partners the ability to deliver on new experiences, and Microsoft's Neo is trailblazing a new category of devices. Intel is committed to pushing the boundaries of computing by delivering key technology innovations for partners across the ecosystem," said Gregory Bryant, Intel executive vice president and general manager of the Client Computing Group.

Unfortunately, there is not a lot of information, so hopefully, we will hear more about these devices in the near future.

Last modified on 03 October 2019
Rate this item
(0 votes)
Tagged under
More in this category: « Microsoft Surface Laptop 3 comes in two sizes Tame Apple Press fumes after Microsoft releases a phone »
back to top