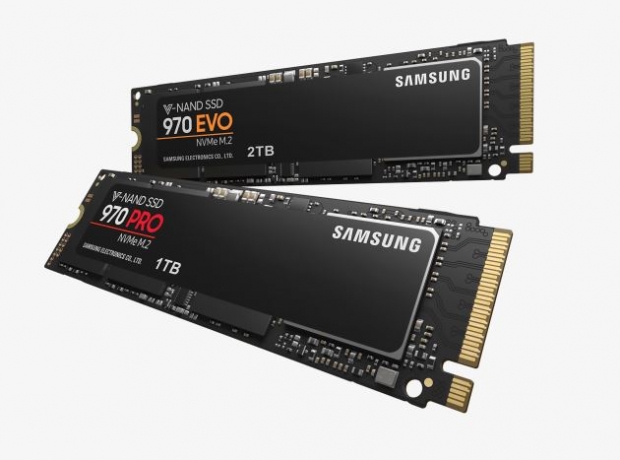 Samsung has announced the third generation of its high end consumer NVMe SSDs.

Dubbed the 970 PRO and 970 EVO M.2 NVMe SSDs use a newer controller and Samsung's latest 64-layer 3D NAND flash memory. The outgoing 960 PRO and 960 EVO were first announced in September 2016 and shipped in the autumn, so they have had a long run as Samsung's flagship consumer SSD.

Compared to its predecessor, the 970 EVO promises a small improvement in sequential read speed and a more substantial boost to sequential write speed for all but the smallest 250GB model. Peak random access performance is also substantially improved, but again the 250GB model gets left out and is rated as slower than the 960 EVO 250GB. The warranty on the EVO has been extended from three years to five years, and the write endurance ratings have been increased by 50 percent to retain almost the same drive writes per day rating.

The 970 PRO's performance specs aren't too different from the 970 EVO. Many of the ratings are the same, and the ones that differ are mostly better by just three to 11 percent for the PRO. The PRO doesn't rely on SLC write caching so it can maintain its write speed far longer than the EVO. Second, the rated write endurance of the 970 PRO is twice that of the EVO, going from just over 0.3 Drive Writes Per Day to 0.6 DWPD.

While most consumers will not give a monkey's about these differences, they help the 970 PRO look good as a premium product. Anandtech found a spec sheet and price list