Review: Great value for money is no small matter


Today we’ll be looking at a rather interesting Lenovo 11.6-incher, and right off the bat it’s worth noting that the IdeaPad S205 is neither a netbook nor a proper notebook, and some may describe it as a subnotebook.

There is a good reason not to call it a netbook. It’s powered by AMD’s E-350 APU and a couple of years back AMD was adamant that netbooks were not a separate product category. We believe this was a good call, since the lines between various product categories are simply too blurred and there’s no point in entering philosophical discussions on the issue.

Here are the basics. The cheapest IdeaPad S205 variant ships with 1GB of memory, 250GB of storage and no preinstalled OS, all at a bargain price of €259 in major European markets. Sounds tempting, let’s take a closer look.
We won’t waste much time on the specs and performance. AMD’s Brazos platform has been around for months and our well informed readers already know what to expect, a dual-core 1.6GHz E-350 APU with HD 6310 graphics. Brazos is superior to Intel’s Atom in terms of performance, particularly on the graphics front, but it also uses a bit more power. 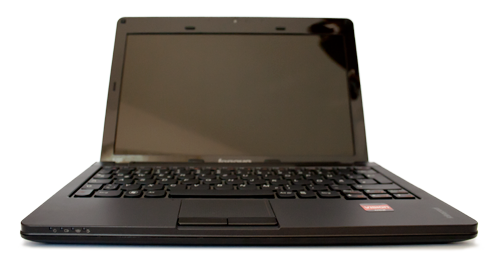 Brazos is a well balanced platform for entry level notebooks and small form factor desktops, as it offers adequate performance with an 18W thermal envelope and excellent video capabilities. Of course, it’s not powerful enough to cope with demanding applications, but it is an excellent and cost effective solution for these niche market segments.

Sounds nice, although 1GB of memory isn’t enough in this day and age, but then again, an additional aftermarket 1GB module will set you back just €6.

Lenovo also offers several pricier SKUs, with up to 4GB of memory, 500GB of storage, Windows 7 Premium and UMTS connectivity. The priciest versions sell for more than €400, but we believe most consumers will choose midrange versions, with 2GB of memory and 320GB of storage for about €290 depending on the market. There is a very good reason to go for a 2GB version, and we will explain it later on.

The IdeaPad S205 is based on last year’s IdeaPad U160, which is a tad lighter, Intel-powered and it comes in different color schemes. It measures 290 x 193 x 26 mm and this is average for its class. It weighs 1.48kg with a 6-cell battery, which makes it look a bit chubbier than it actually is.

The design is straightforward and we don’t have many objections. The patterned lid is a madder of personal taste, but we find it interesting, especially after being subjected to Lenovo’s traditionally dull designs for years. 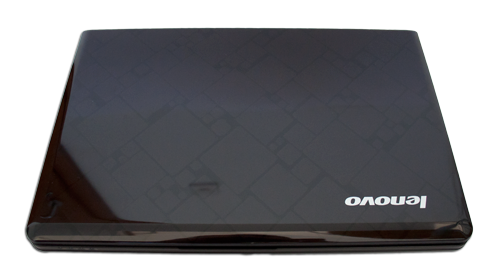 The lid is softly curved at the edges, creating the impression of an even thinner notebook. Lenovo relied on plastic for all parts of the chassis, which comes as no surprise considering the price. However, the general feel is pretty good. It’s put together quite well and it feels sturdy, as much as a tiny 11.6-incher can.

The biggest difference compared to earlier IdeaPads is the chiclet keyboard and we believe it’s a nice touch. Lenovo used matte plastic on the palmrests and other parts of the chassis, making the S205 smudge-proof, which is commendable. Of course, you can’t expect miracles at this price point. Some details, like the touchpad buttons, feel a bit cheap. 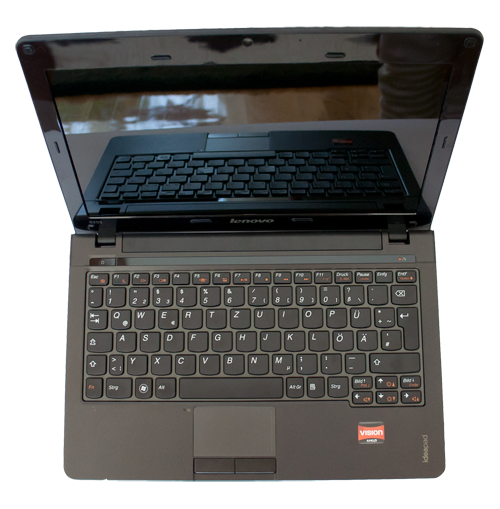 The IdeaPad S205 is available in black and silver color options and we find the black somewhat more appealing. Don’t get us wrong, the silver version looks nice, but we just prefer black when it comes to plastics - it just makes more sense than imitating a metal finish on what is essentially a lump of plastic.

Although we’re talking about a very cheap and light notebook, the S205 feels rather sturdy and we don’t expect any major issues, provided you treat it right and don’t drop it too often. 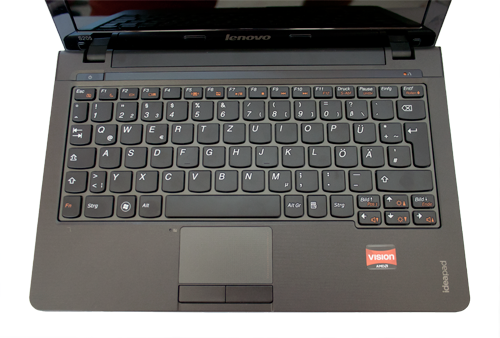 Like most small notebooks, it doesn’t suffer from much flex on the keyboard. The screen hinges feel right, too.

We are not thrilled by Lenovo’s decision to fashion the bottom from a single piece of plastic. While this approach tends to add to sturdiness, upgradeability is a major issue. To access the memory slots and hard drive, one must remove the keyboard, which is really anything but practical. At one point we just stopped counting, but we had to undo more than a dozen screws to access the memory slots.

Lenovo’s earlier IdeaPads featured a couple of panels on the bottom, making upgrades a breeze. This is why it would be best to go for a version with more memory and avoid future upgrades altogether, 4GB would be plenty and with today’s prices the extra RAM won’t cost you much.

There are also plenty of vents on the bottom, so airflow is compromised when using the S205 on a soft surface, i.e. on your lap. Luckily, there’s not much heat to dissipate anyway, so it is a relatively cool and silent machine. Once it kicks in, the fan is audible, but it’s really not a distraction. 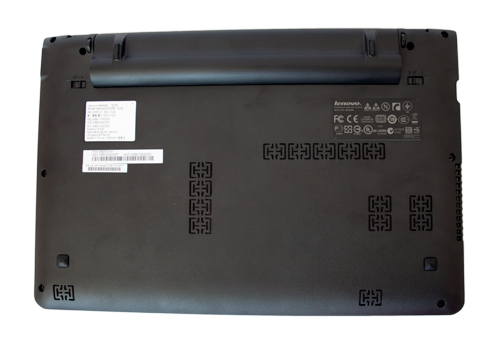 The chunky battery is another issue. Basically the S205 is designed to accommodate a 3-cell battery, so the 6-cell unit protrudes from the chassis and adds about 10mm to the waistline. Lenovo is not the only vendor to use this approach, but frankly we find it rather daft.