As we demonstrated in our previous GTX 650 Ti Boost reviews, from Gainward’s and EVGA’s stables, Nvidia’s new card seems to tick all the right boxes and hit the sweet spot. It can cope with 1080p gaming at high detail settings, it can deliver reasonable frame rates and it doesn’t cost an arm and a leg.

Performance is adequate for most titles at 1080p, and even when the GTX 650 Ti Boost runs out of steam, it is relatively easy to tinker with detail levels and get playable frame rates. It is quite simply a very good choice for gamers on a budget, who don’t want to sacrifice a lot of visual quality, but don’t want to break the bank and get a high-end card.

However, the GTX 650 Ti Boost is the cheapest SLI capable card on the market. It doesn’t sound like much of a selling point in this market segment, but on the other hand the Boost is a relatively capable card, so the decision to include SLI support sounds interesting. True, it might be better to invest €300 in a high-end Radeon or Geforce rather than go for an SLI setup with two GTX 650 Ti Boost cards, but then again SLI could come in handy when it’s time to upgrade.

As the name suggests, GPU Boost allows the card to boost GPU clocks depending on load and thermals. Thanks to the new bus and faster memory chips, the new card has 66 percent more bandwidth compared to the plain GTX 650 Ti, which uses a 128-bit memory bus. This is clearly a huge difference. 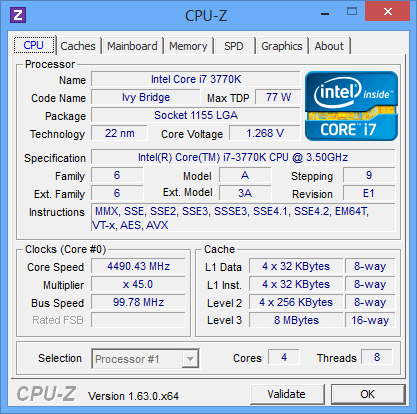 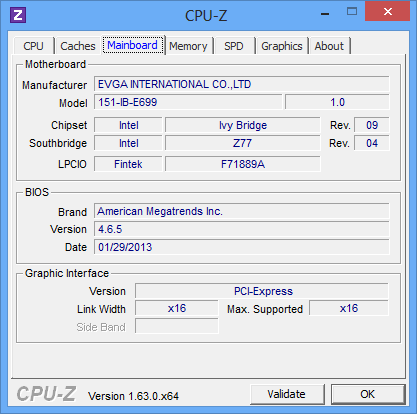 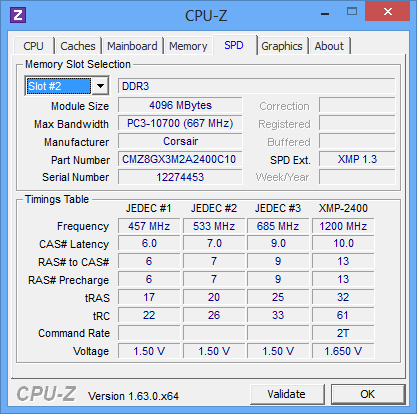 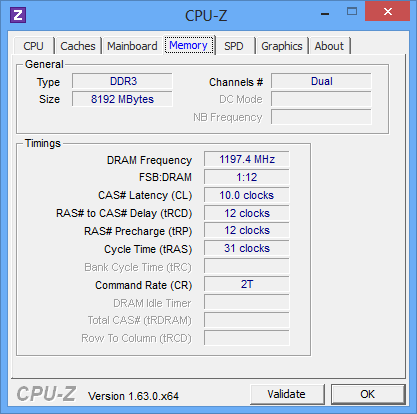 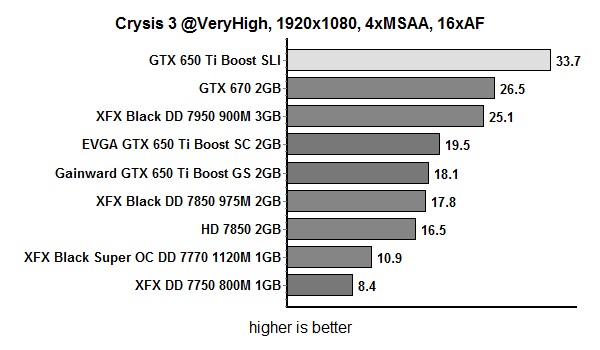 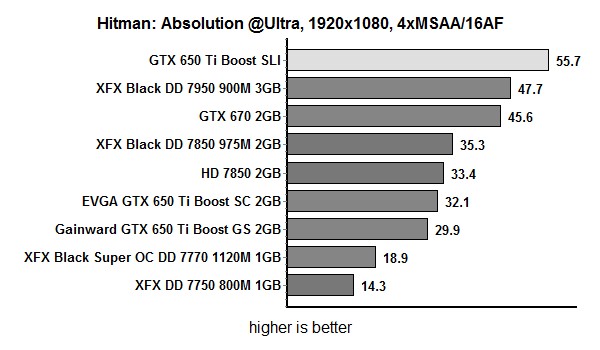 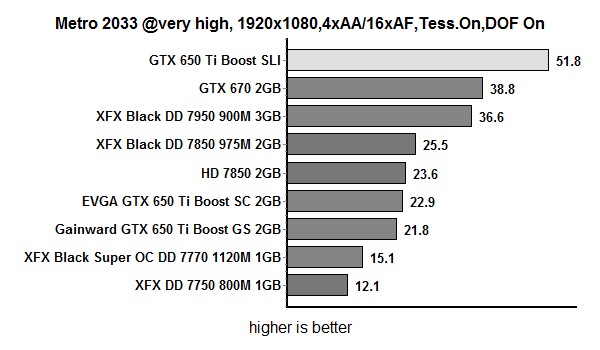 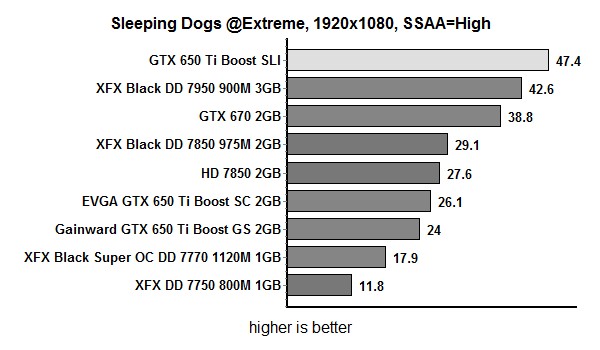 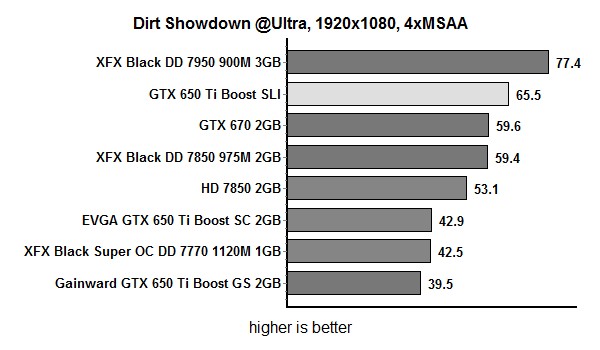 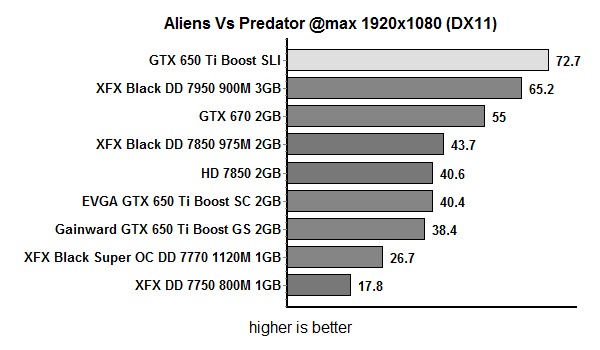 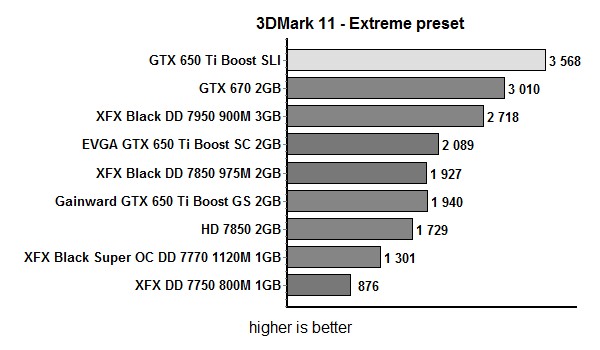 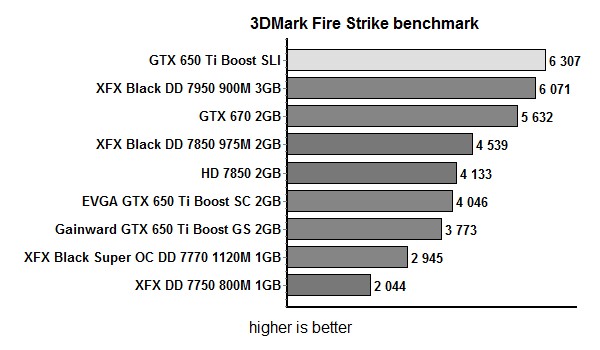 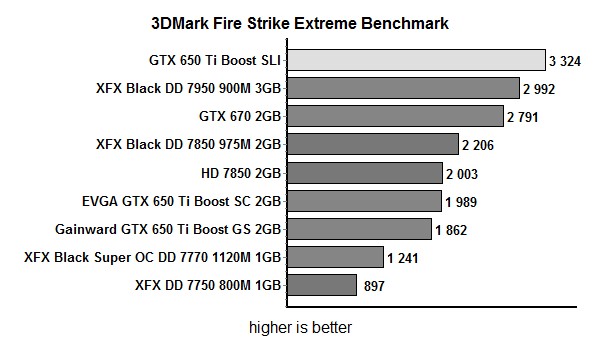 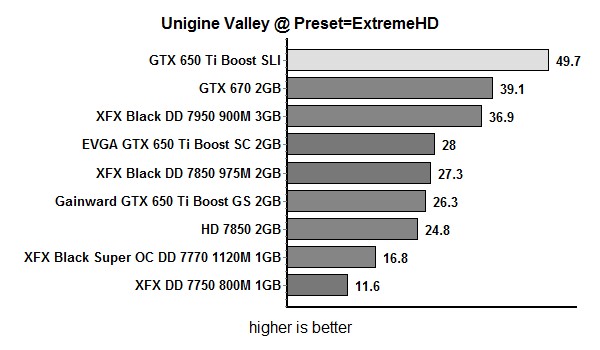 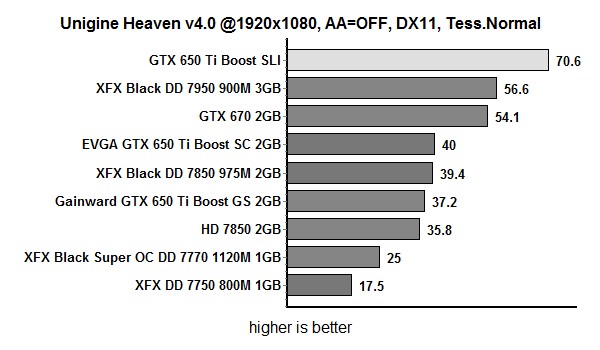 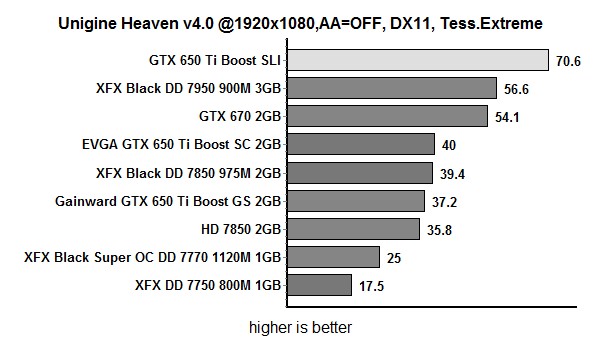 The GTX 650 Ti Boost SLI wasn’t too loud, but it was clearly audible. For comparison, the XFX HD 7950 Black Edition was significantly quieter and it used up less power. Of course, the level of noise varies from card to card, depending on the AIB. In this case, XFX did a very good job with the 7950 Black Edition. The dual fan cooler makes XFX’s card one of the quietest HD 7950 cards on the market. We used two GTX 650 Ti Boost cards from two different AIBs, EVGA and Gainward. Neither was too loud, but of course, an SLI setup is a lot louder than a single card. In terms of power consumption, two cards tend to be a lot less power efficient than a single, more powerful card. Fortunately the GTX 650 Ti Boost isn’t much of a power hog and the results were acceptable, provided you have a 650W PSU, or better.

The dilemma is whether there is any point in getting two weaker cards chained in SLI rather than a single, more powerful card. Unsurprisingly, most users will go for the latter option.

However, the addition of SLI on an affordable mid-range card might be a boon for gamers on a budget. It basically means that you can get a €150 card and upgrade your system down the road with a second card, probably at a much lower price. That’s why the decision to include SLI on the Boost makes sense. In case you decide you need more performance after all, upgrading your rig a year from now with a second card should be easy. In contrast, getting a second €250-300 card is a bit more painful for the old credit card.

On the whole, SLI and CrossFire drivers work very well, much better than a few years ago. Driver profiles for new games are being constantly updated, so you shouldn’t have any issues with upcoming titles. In other words, consumers should not avoid SLI or CrossFire. They are no longer reserved for ultra high end gaming rigs and with practically no driver issues they are a perfectly sound choice for the average gamer.