Review: Athlon 5350 lives up to expectations

AMD launched its low-cost AM1 platform last month and we must note that it was a rather unusual launch. Since it's AMD's entry level socketed platform, there was no hype and oddly enough AMD's NDA is still in effect, despite the fact that AM1 products have been available for weeks.

Since Fudzilla is a no-NDA zone, that does not concern us very much. According to our info the NDA will be lifted in a few days, so we'll finally get a chance to see loads of proper reviews next week.

Luckily we managed to get a bit more info from an early AM1 adopter and Fudzilla regular Andrea Sibaldi. Sibaldi decided to pick up an Athlon 5350 and an Asrock AM1B-ITX board, both of which are available in Italian retail.

The Athlon 5350 is the fastest AM1 part available today, so let's see what's under the bonnet.

The first batch of AM1 SoCs consists of four different SKUs, ranging from cheap dual-core Semprons to the quad-core Athlon 5350, clocked at 2.05GHz. 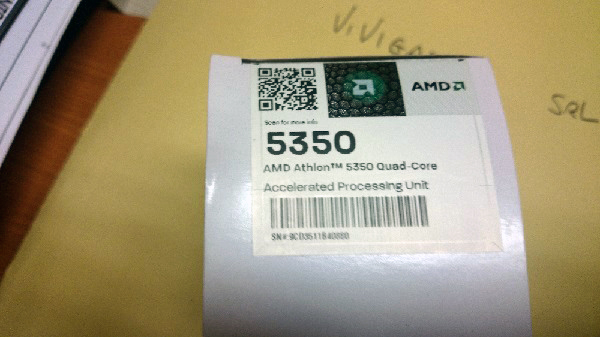 Since AM1 parts don't have to fit the same thermal envelope as their mobile siblings, the Athlon 5350 ends up with higher clocks both on the CPU and GPU side. It features Radeon HD 8400 graphics, with 128 cores clocked at 600MHz. The A4-5000 shares the same GPU architecture, but its HD 8330 iGPU is clocked at 497MHz.

Like all Kabinis, the Athlon 5350 features a single-channel memory controller and it supports DDR3-1600. The lack of a dual-channel controller has been a source of criticism in some circles, but frankly we don't think it is very relevant. Kabini is supposed to be affordable, so AMD's decision to save a bit of die size is justified.

There is really not much to report. It's a Kabini part with bumped up clocks, no surprises there.

The AM1 platform is all new, so you can't exactly walk down to your local shop and buy an aftermarket cooler. AMD's new Socket AM1 (previously known as Socket FS1b) is not compatible with its existing AM- and FM-series sockets. It is tiny and as a result it comes with an all new cooler mount. 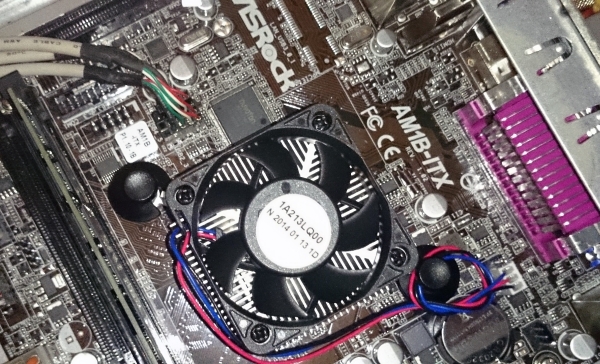 This may be a problem for some early adopters who were hoping to build a near-silent AM1 rig. The platform is very appealing for home PCs, small offices and HTPCs - environments that don't like a lot of noise. Sadly, we have yet to see any announcements from cooler makers and it may be a while before we see aftermarket coolers. Bear in mind that AM1 is not merely a new platform, it is also a niche platform, hence we don't expect to see that many aftermarket coolers.

AMD's stock cooler for AM1 parts is an all-aluminium affair with a 50x50mm footprint. Keeping a 25W chip cool isn't all that hard and even the tiny fan does a very good job and it is relatively quiet. 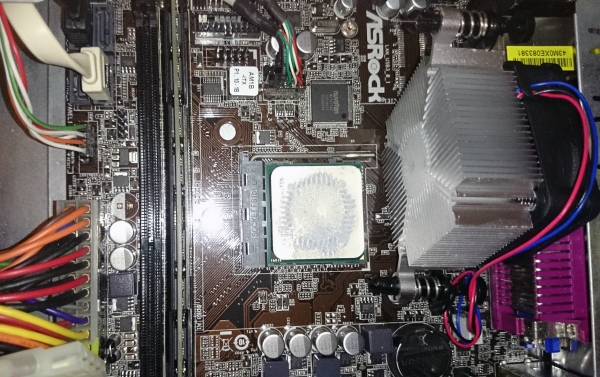 After running Wprime on 1024M on 4 threads (around 15 minutes), the temperature peaked at 44°C, while the fan was constantly spinning at 3980RPM. It's audible, but definitely not noisy. The PSU fan was loud enough to drown out the noise. However, in case you are planning to use a passive PSU or a brick PSU, it won't be completely inaudible, at least not under load. 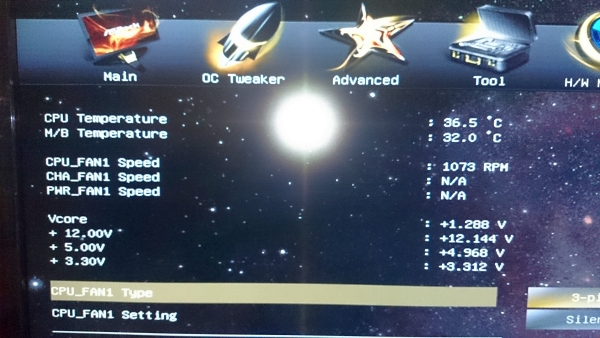 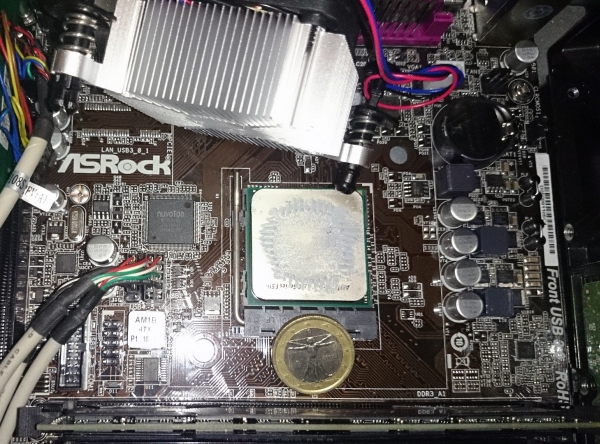 In essence it appears as if the heatsink itself does much of the work, as the temperature doesn't vary very much at different RPM. This is of course a good thing, as the fan will spend most of its time spinning at 1200RPM or so, rendering it almost completely silent.

What we would really like to see in the future are some completely passive AM1 parts. That shouldn't be much of a problem, since even the fastest quad-core in the range seems to cope rather well. AMD could decide to launch even cooler parts in the 10W to 15W range. That's the beauty of socketed platforms - even if AMD doesn't have such parts now, it might launch them next time around and users will be able to upgrade their boxes for peanuts.

Now for some benchmarks and caveats. This is not a full review and it was not conducted in a proper lab setting. As a result, the scores should be viewed as such. In reality, you can only expect better results in full reviews, with official AMD samples and better driver support.

Also, the motherboard used in the tests is Asrock's AM1B-ITX, which is basically an office board and it's not the perfect choice for an HTPC rig, especially for audiophiles, as it lacks digital audio - it has a humble ALC662 with 5.1 support.

However, techies in some organisations should like it very much, as it comes with legacy VGA, PS/2 and parallel connectors, making it suitable for upgrades in some niches (you'd be surprised to learn how many firms still rely on ancient parallel matrix printers for niche uses, not to mention VGA monitors). Better yet, the board is on sale for just €25 and like all AM1 boards it employs standard DDR3 DIMM and there's a PCIe 2.0 slot, too. 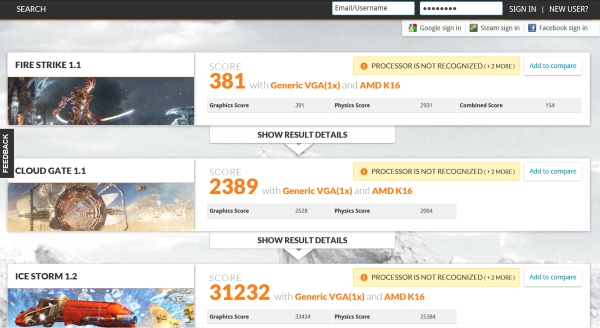 Now for some numbers. In 3Dmark's Fire Strike 1.1 test it scores 381, Cloud Gate 1.1 delivered 2389, while the Ice Storm 1.2 test returned a score of 31232. As you can see, the graphics card is listed as a generic VGA, so proper driver support is still lacking. The OS of choice was Windows 7 rather than Windows 8.x and the latest Catalyst beta 14.3 was used.

Now for another problem. What do we compare it to? We did not have a chance to test any Bay Trail-D parts and the only remotely comparable chip we tested was the Atom Z3740D, in our Asus T100TA review. This is of course anything but a fair comparison, since the Z3740D is a tablet chip. It's a 4W part, whereas the Athlon 5350 maxes out at 25W.

The T100TA scored 16923 in Ice Storm in its second run. However, the Z3740D could not handle Fire Strike or Cloud Gate benchmarks.

PCMark 7 an overall score of 1842, substantially lower than the Bay Trail based Asus T100TA. However, the Athlon was penalised due to its sluggish 5400rpm hard drive and it's worth noting that PCMark could not identify the GPU, either.

The Windows Experience Index is more or less dead, but it's still handy if you'd like to quickly compare you're old PC to something new without having to install any benchmarks. The Athlon 5350 rig scored 4.2, with a substantially better gaming graphics score than the Bay Trail. The memory score was better, too, while the CPU is evenly matched.

For reasons outlined a minute ago, we can't hand down a final verdict based solely on these numbers. However, the numbers are in line with expectations and frankly benchmarks aren't what the AM1 platform is all about.

The A4-5000 is roughly on par with quad-core Atom Z37xx parts, but as usual it comes out on top in GPU tests. The Athlon 5350 is more of the same, but thanks to its higher clocks, it should end up somewhat faster across the board.

This is not exactly a coup for AMD, since we're comparing apples and oranges. Bay Trail-T maxes out at 5W, while AM1 parts have a TDP of 25W. In addition, AMD is expected to launch Beema and Mullins in a matter of weeks, but the AM1 platform probably won't get any new silicon for months.

That is beside the point. The AM1 platform is not intended for the latest and greatest tech - it is all about flexibility and value. It scores well in both departments, since it is the cheapest possible way of getting a socketed x86 platform with plenty of legacy support. It's designed with economics in mind, so it's really not meant for the average Fudzilla reader. It is designed for the head of a school district in Brazil, a tech exec in Eastern Europe looking to upgrade his XP boxes and just an average bloke looking to buy a cheap home PC in Vietnam.

There's nothing wrong with that, on the contrary, in my opinion it is a very good approach on AMD's part. The AM1 platform offers exceptional value, legacy support, along with upgradeability and reparability. While it may not be the perfect choice for all users, I see a lot of long-term potential, especially in emerging markets.