After taking over ATI there was long talk about "fusing" CPU + GPU on one dice in a monolithic stucture. While Intel used a CPU dice and GPU die and put them into the same package, the AMD approach was more ambitious. A GPU is normaly used to run at high temperatures while CPUs are much more temperature sensitive, combining both is a tricky operation. Now the first product which is now called APU have emerged. While the single core solutions C-30 and E-240 seems a bit 1980's to us, the Zacate APU Dual-Core are more appealing. Truth be told, only the E-350 seems to be a valid option, because the C-50 two cores clocked at 1GHz only impress in tablets or smartphones. (Update: Sorry, there was a bit confusion about the CPU-names.)

The E-350 consits of two CPU cores which are clocked at 1.6GHz, with 32kB L1 Instruction and 32kB L1 Data cache and 512MB L2 cache per Core. In addition you find a derivative of the Radeon HD 5450 inside the APU called Radeon HD6310 with 80 shaders clocked at 500MHz and the UVD3 video decoding engine from the 6-series. Of course the APU features a memory controller but it's limited to two slots and single channel. Besides that, there is a PCIe 2.0 Express hub for four lanes. The whole APU is rated with 18W TDP. 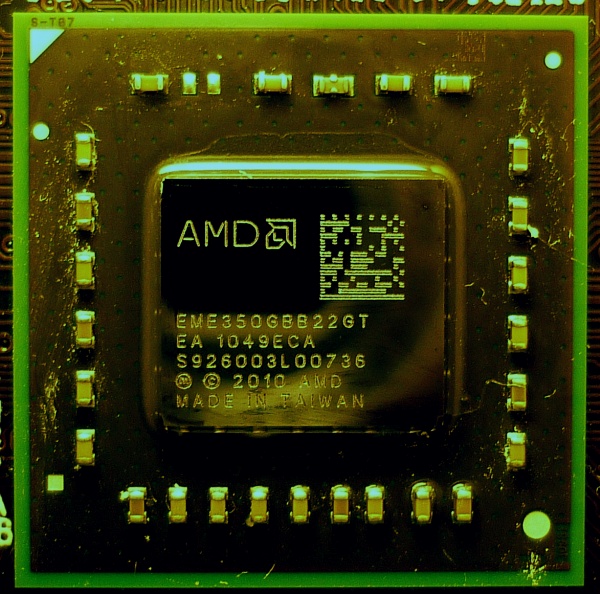 It should not have been so much trouble to integrate the Southbridge into this chip too, but we have to stick with it. Its called Fusion Controller Hub (FCH). It provides all the goodies we need, such as six 6Gbps SATA ports, 14 USB 2.0 ports, two USB 1.1 ports (whoever needs them), four additional PCIe 1.0 lanes. There are other variations which would also include two USB 3.0 ports and Gb LAN MAC, and RAID support but nobody uses them yet. This little piece of silicion adds up another 5W TDP, so the whole platform has a TDP of 23W. In contrast Intel's Atom D525 which clocks at 1.86GHz uses up 13W and the NM10 chipset another 10.6W, quite on par with AMD. 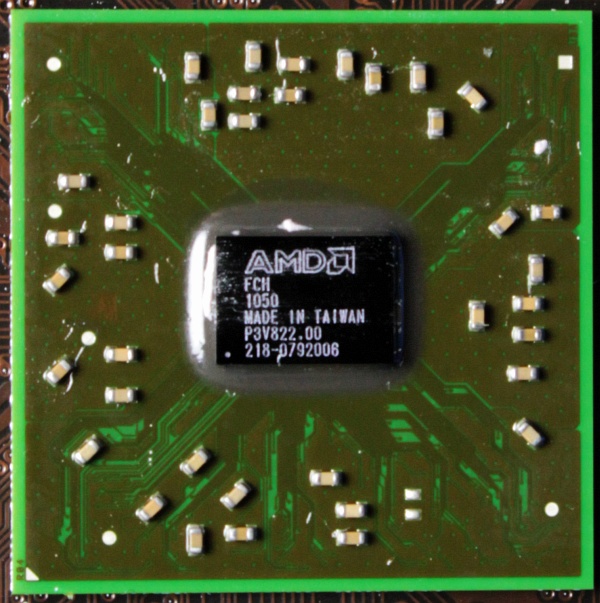