Q3 launch
Sapphire grabbed a lot of attention with its ultra small and ultra quiet Edge HD 2 Atom powered nettop and it surprised by choosing to use Atom and Nvidia ION combination.

Intel and Nvidia are the biggest competitors of Sapphire’s closest partner AMD, but that didn’t stop Sapphire from make some money with this very well designed and smallest PC we’ve ever seen.

Well, it won’t remain Intel and Nvidia only as Sapphire works on the latest AMD powered nettop that will get some Brazos CPUs inside and most likely USB 3.0 support. USB 3.0 is the one thing that Intel still has to include to its Atom nettop reference design and unfortunately this won’t change even with the future Atoms. 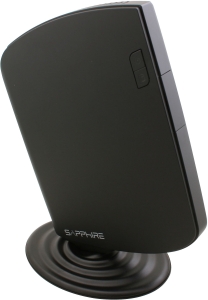 The only issue with AMD E series of CPU is that the lowest TDP from this dual core with cool 63x0 graphics is 18W while Intel’s upcoming dual core Atom N2800 with two cores at 1.86GHz makes do with just 6.5W TDP.

Sapphire will most likely release another updated Edge mini PC based on new Atom Cedar Trail, but we have only vague details about that.
Rate this item
(14 votes)
Tagged under