Apple iPad Pro has feature Microsoft did not think of 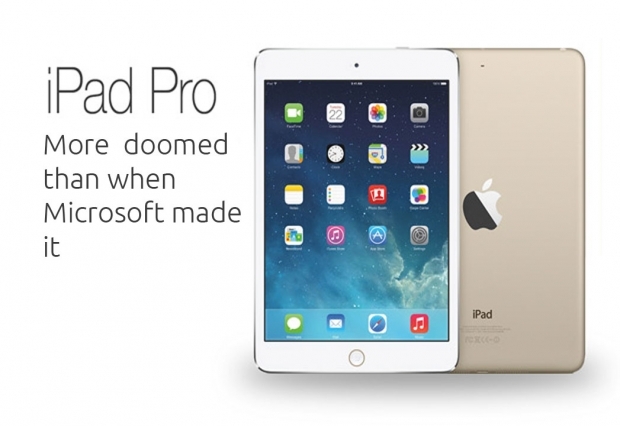 Turns itself off and refuses to start

The fruity cargo cult Apple has been playing down claims that its new iPad Pro is just an expensive knock off of the Surface Pro by pointing out it has one important feature that Microsoft was not clever enough to invent.

Apparently when it is being charged, the expensive IPad Pro turns itself off and refuses to turn back on again. Apple fanboys who bankrupted themselves for the expensive toy have to do a hard reset will turn the iPad Pro back on.

Of course they are happy to do this because it is a super, cool, innovation that Microsoft did not think of and it will be a real game changer. Soon everyone will demand a tablet which costs Euro 1,200 and switches itself off. Normally you can’t get that sort of quality from a $100 tablet, so it just goes to show you get what you pay for.

Apple has since acknowledged the problem by posting a support document on its website. The document pretty much tells users to keep doing what they have been doing, which is a hard reset.

“To get back to using your iPad Pro, force restart it by pressing and holding both the Sleep/Wake and Home buttons for at least ten seconds, until you see the Apple logo.”

Apple is looking into the problem which is bound only to effect a small number of lucky users. It is not clear if it is bad Apple software, which is easy to fix, or a cheap component which is broken, which will cost a bit more.

Our own work around has proved 100 per cent effective in fixing the problem. It involves gently tapping the screen 20 times with a sledgehammer and then buying a proper notebook which does more things for half the price.