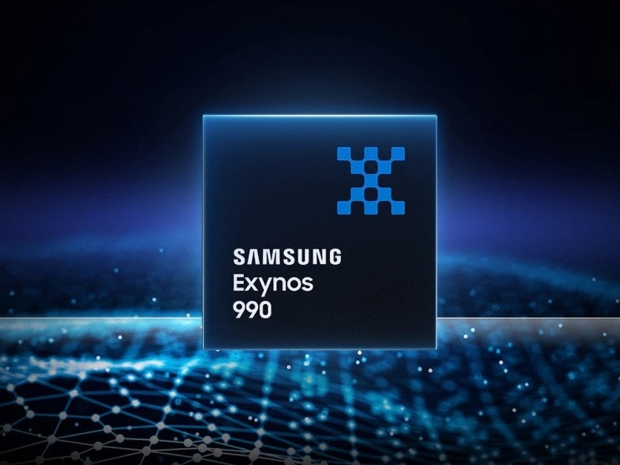 After briefly teasing it yesterday, Samsung has now announced the new Exynos 990 SoC, promising significant performance and power improvements on CPU, GPU, as well as on the NPU+DSP side.

The new Exynos 990 SoC is built on Samsung's own 7nm EUV manufacturing process, and although the chipmaker did not reveal any specific clock details, it did share a lot of information, with some rather interesting surprises.

According to Samsung, the new Exynos 990 SoC promises 20% performance and power gain with its 2+2+4 tri-cluster octa-core CPU configuration. The tri-cluster CPU uses two custom cores, most likely Samsung's new Exynos M5, two high-power Cortex-A76 cores, and four Cortex-A55 cores. As said, Samsung did not reveal any clock details but these will probably depend on the implementation.

The Exynos 990 also comes with the new Mali-G77 MP11 GPU, which, based on Valhall architecture, will bring performance or power improvements of up to 20 percent as well.

These performance figures do not sound bad, as 20 percent across the board is a nice result, especially if compared to the Exynos 9825 SoC, and it might put it in the Snapdragon 855 performance range. It will be interesting to see how it compares to upcoming Qualcomm's flagship SoC which should be announced at the Hawaii event in December.

“Milestones in technological advancements are imminent all around us. Mobile 5G technology is opening new avenues for communication and connection, while AI is poised to become an everyday tool for people worldwide,” noted Inyup Kang, president of System LSI Business at Samsung Electronics. “Samsung’s Exynos 990 and Exynos Modem 5123 are perfectly adapted for high-volume 5G and AI applications, and are designed to help the world’s most ambitious enterprises, large and small, achieve their goals of bringing new capabilities to their markets .”

On the hardware side, Samsung is also implementing support for LPDDR5 memory, which will bring an increase in memory bandwidth with data rates of up to 5,500Mbps.

Samsung is also betting big on AI implementation, and its dual-core neural processing unit (NPU) with an improved digital signal processor (DSP), provides over ten-trillion operations per second (10 TOPs), which is a significant boost compared to around 1.86 TOPs. Samsung bets that its NPU will allow AI to be done on a smartphone or other mobile platform rather than going through a network and a server.

To much surprise, the Exynos 990 SoC won't come with an integrated modem, but rather the external 5G Exynos Modem 5123, which is also one of the first 5G modem chips manufactured on the 7nm EUV process.

Going to mass production by the end of the year, most likely coming to Galaxy S11

Samsung announced that the Exynos 990 SoC and the Exynos Modem 5123 are expected to begin mass production by the end of this year, which means that the first devices with the new SoC are not far behind.

It is highly likely that Exynos 990 will be a part of Samsung's next flagship Galaxy S11 smartphone, at least in some markets, and judging from the lack of integrated 4G modem capabilities, it is safe to say that Samsung is going all-in with 5G by pairing its SoCs with the new modem.