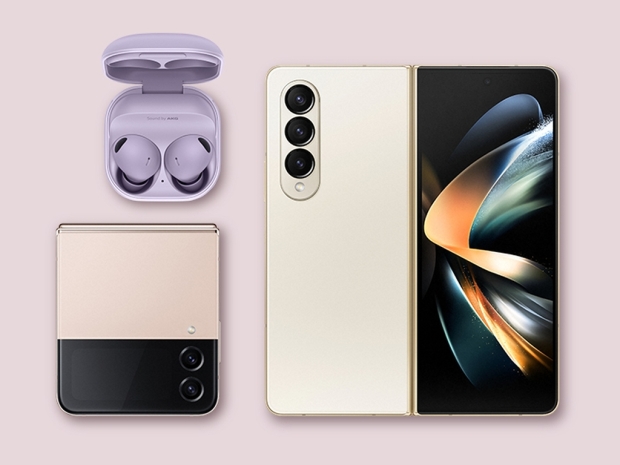 At its Unpacked August event held today, Samsung unveiled the new generation of its foldable smartphones, the Galaxy Z Fold4 and the Galaxy Z Flip4.

The new generation brings plenty of improvements and upgrades, on both hardware and design fronts. These include the latest flagship chipset from Qualcomm, a whole new hinge design, better screens, better cameras and more.

The new Galaxy Z Flip4 might be the best clamshell folding phone to date, and Samsung was keen to note that it took a lot of effort in order to make it lighter and slimmer while maintaining the same or higher durability. The new hinge system is quite impressive and shows a much narrower gap.

The Galaxy Z Flip4 is now 17.1mm thick in its closed state and 6.9mm when opened, which is quite an impressive feat. The phone measures 84.9x71.9mm when closed and 165.2x71.9mm when opened. Samsung now uses Corning Gorilla Glass Victus+ for back panels and the so-called Armor Aluminum for the frame.

The main display on the Galaxy Z Flip4 did not get updated as we are still looking at a 6.7-inch Dynamic AMOLED screen with FHD+ resolution and 120Hz adaptive refresh rate, but, it did somewhat trim down the bezels. The second screen, called the cover screen, is also the same as on the Galaxy Z Flip3, so you are looking at a 1.9-inch 512x260 resolution AMOLED screen. Samsung updated the software behind it so you get a lot more customization options, new widgets and quick settings, dial options, as well as reply to messages via speech-to-text directly from the cover screen. 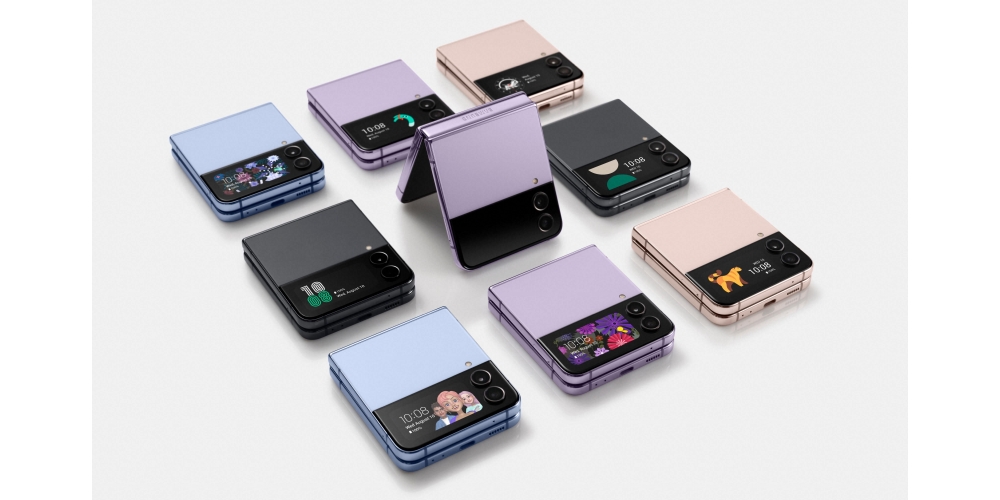 The rest of the specifications are pretty much standard, as you get WiFi 6, Bluetooth 5.2, USB Type-C 2.0, stereo speakers, a side-mounted fingerprint sensor, and more. The biggest update here is the battery, as Samsung upgraded it to 3,700mAh and gave it 25W wired charging (50% in 30mins) and 15W wireless charging (4.5W reverse wireless charging).

The Galaxy Z Flip4 will be available in three main colors, Bora Purple, Graphite, Blue, and Pink Gold, as well as an option to configure a Bespoke Edition model from Samsung’s website, combining three frame colors with different top and bottom matte covers.

Samsung was keen to note that the first three generations of the Z Fold were about getting things right in the foldable smartphone market as well as improving durability, and now it is time to iron out the design, ergonomics, and other stuff, and that is where the Galaxy Z Fold4 comes from.

The Samsung Galaxy Z Fold4 got a decent upgrade in wider screens, while actually being smaller than its predecessor, all thanks to thinner bezels. The Galaxy Z Fold4 measures 155.1x130.1x6.3 mm unfolded and 155.1x67.1x14.2-15.8 mm when folded, weighing 263g. The new Z Fold4 is actually 3.1mm shorter and slightly thinner, both when closed and opened, compared to the Z Fold3. The cover screen is now 2.7mm wider (although still 6.2-inches) but has a higher resolution and 23.1:9 ratio. The same goes for the foldable screen, which now has a 6:5 aspect ratio. 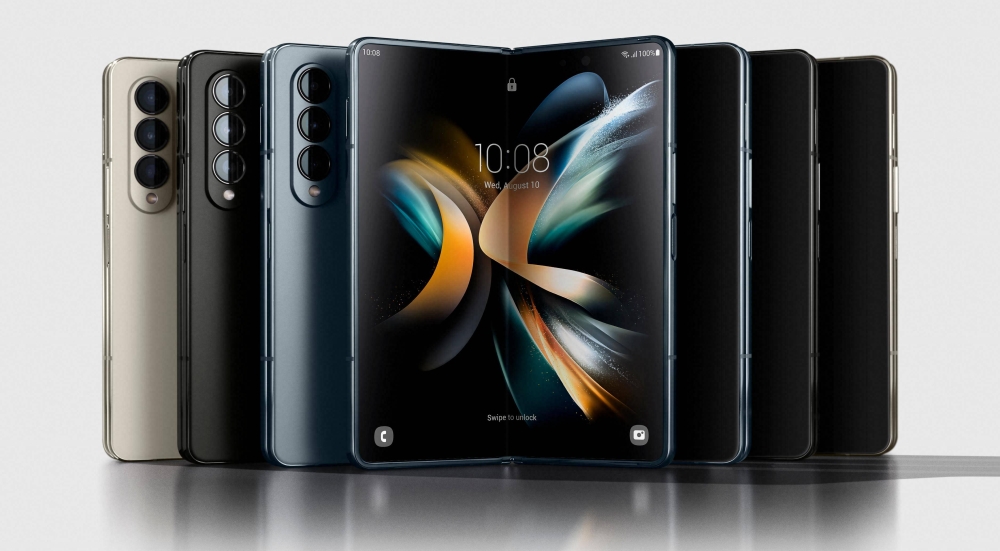 Samsung still uses Armor Aluminum for the frame, and you get the same new hinge design, which Samsung says is certified for up to 200,000 folds. The front display and the back are protected by Gorilla Glass Victus+ and it is iPX8 rated, meaning you can sink it under 1.5m of fresh water for up to 30 minutes.

Of course, Samsung uses the same Qualcomm flagship Snapdragon 8+ Gen1 SoC for the Galaxy Z Fold4. It pairs it up with 12GB of RAM, and 256GB, 512GB, and in some regions, 1TB of UFS 3.1 internal storage.

As expected, there are two selfie cameras, a 4-megapixel one under the main display, and a 10-megapixel cover camera behind an f/2.2 24mm lens. 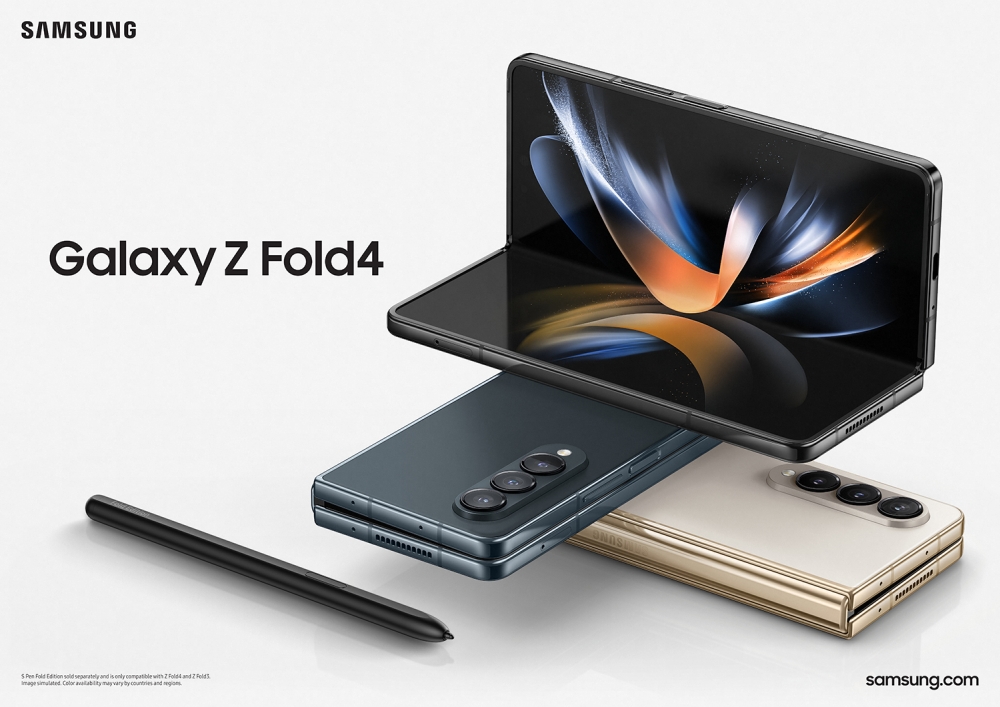 The new Samsung Galaxy Z Fold4 will be available in Phantom Black, Beige, and Graygreen color options. The price starts at €1,800/$1,800 for the 12GB/256GB version, and pre-orders are open as of today. The phone should officially start selling on August 25th.