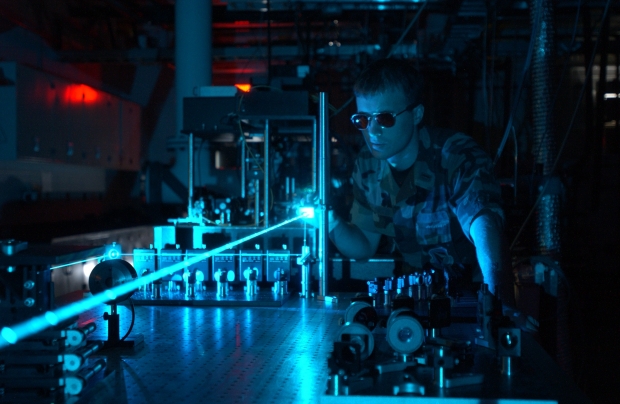 Biggish Blue has been showing off what it claims to be the world's first fully integrated wavelength multiplexed silicon photonics chip.

The chip is a step towards chips that support both electrical and optical circuits on the same chip package, and ultimately the same die.

Optical interconnects and networks can offer much higher bandwidth and consume less power than copper.

IBM's latest nanophotonic chip can be placed on the same package as an electronic chip, bringing the electro-optical conversion closer to the logic. The light is produced off-chip, and brought into the nanophotonic chip through the "laser input ports." Once the chip has been fed some lasers light, there are four receive and transmit ports, each capable of transporting data at 25 gigabits per second, which are bundled up into 100Gbps channels via wavelength multiplexing.

Big Blue claims that its technology could allow for chips with up to eight channels. 800Gbps from a single optical transceiver.

IBM is targeting its silicon photonics technology at data centre and HPC settings, and successfully demoed its new photonic chips in a "datacentre interconnect" setup that could push 100Gbps over a range of up to 2 kilometres (1.24 miles).

It wants to create nanophotonic transceivers capable of 800Gbps where it will kick to death the mooted 400Gbps/1Tbps Ethernet standard.

IBM wants to get the lasers on-package using III-V semiconductors. From there, next step (will be to get the lasers, waveguides, photodiodes, and other optics onto the processor die, alongside the copper wires and transistors.

The chip is fabricated on a fairly standard 90nm CMOS process so it does not have as much difficulty getting into a commercial state.

Rate this item
(8 votes)
Tagged under