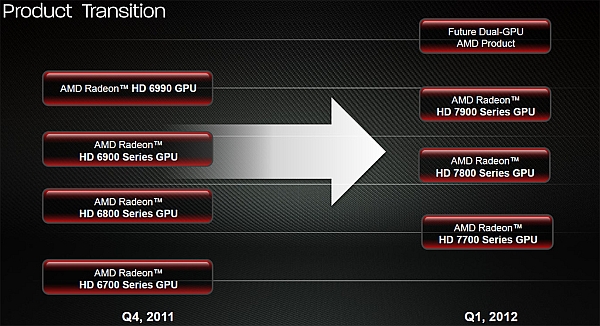 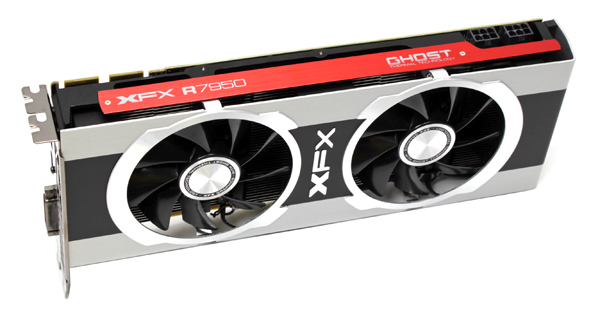 
The packaging is similar to the rest of XFX’s HD 6000/5000 offer – small and sturdy. The box features small Black Edition sign, which clearly show that the package holds one mean gaming machine. 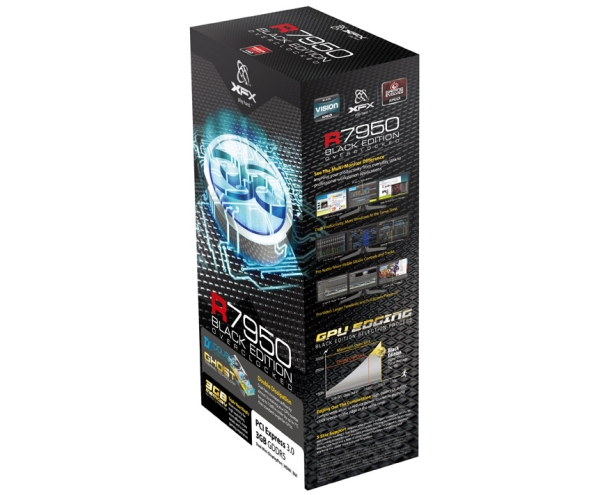 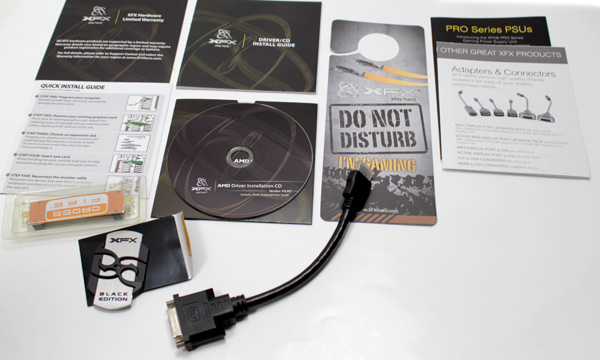 We must admit that XFX FX-795A-TDBC is one of the prettiest dual-fan graphics cards we’ve seen so far.

Cooler design borrows from the reference one in that it takes some of AMD’s traditional color, dual slot width and vapor chamber technology.

With the arrival HD 7900 series, XFX launched its XFACTOR 1.0 collection of features and technologie. With XFACTOR 1.0, XFX aims at the highest level of quality and innovation to ensure gamers get the best performing graphics card. Ghost Thermal technology is the key factor for better cooling. XFX opted for this technology because it allows airflow to cool the heatsink as well as the components and PCB. As you know, overheated components and PCB can also reduce performance. On the next picture you can see how the Radeon HD 7950 Black Edition (FX-795A-TNBC - single fan) manages heat dissipation. 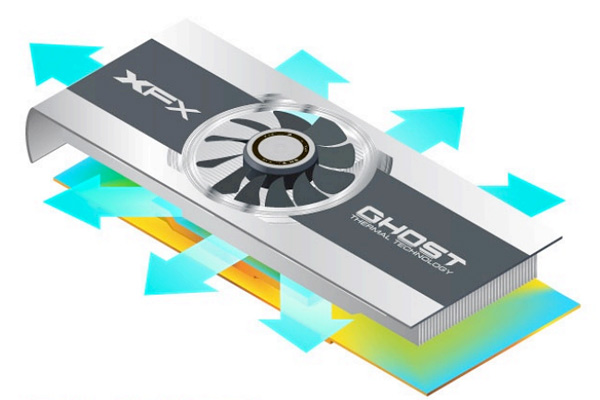 Double Dissipation Technology is XFX’s dual fan design that allows air to cool all the heatsinks and components, as well as the PCB board itself. Unfortunately, we only have the XFX HD 7950 Black Ed. card so we cannot confirm the following comparison, but according to XFX the Double Dissipation can make a noticeable difference in performance; up to 13dBA quieter fans and up to 7°C cooler GPU. 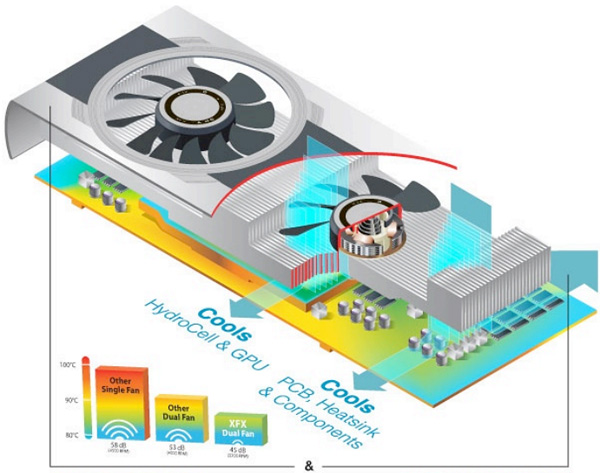 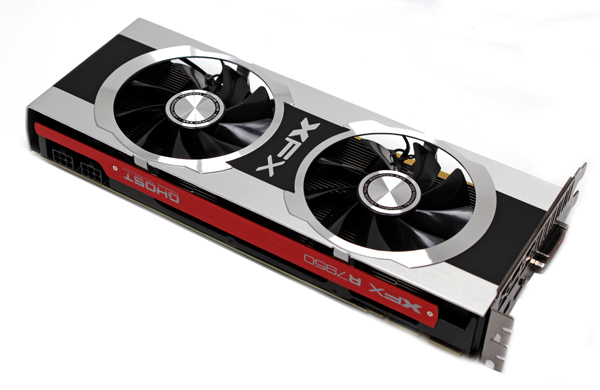 Vapor chamber technology is very popular among graphics card manufacturers because it provides performance and allows for more flexibility in designing high performance GPU coolers. XFX calls this HydroCell and it is used for both Black Edition custom coolers. 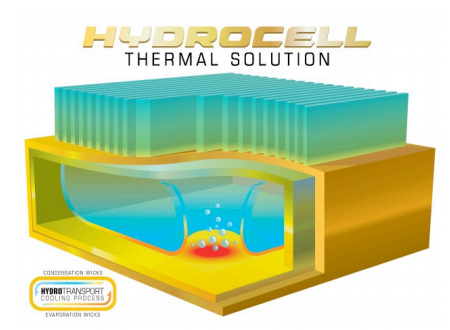 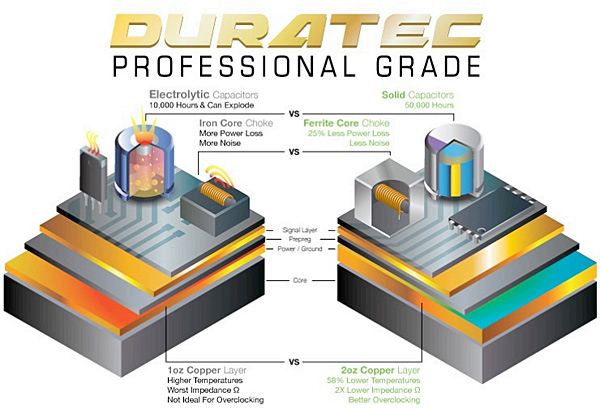 Two additional parts are classified as Duratec components: IP5X Dust Free fan and XFX Bracked Design. While we’re not convinced yet, but it is stated that XFXs bracket design can knock temperatures by up to 20% and increase airflow by up to 2x. 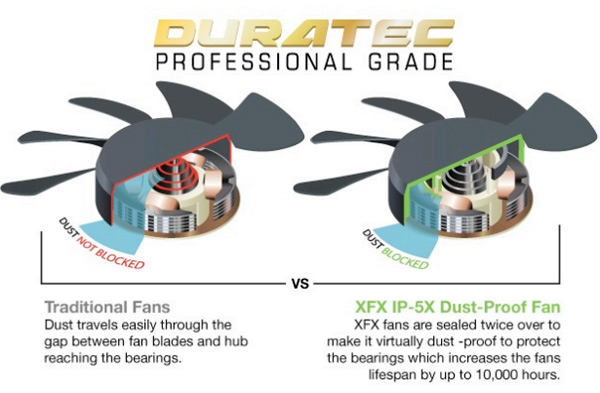 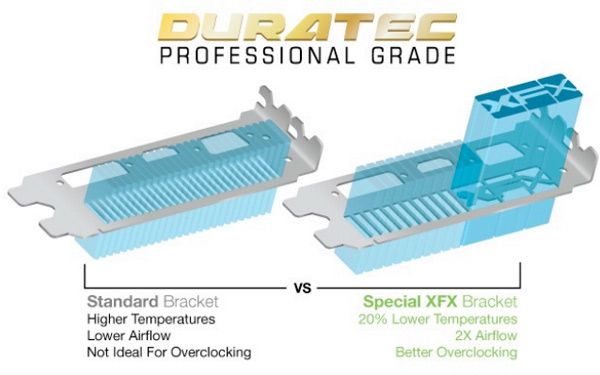 The card has one dual-link DVI out, one standard HDMI and two mini DisplayPort outs. Users will get HDMI to DVI converters, but we didn’t find any DisplayPort converters in the package. 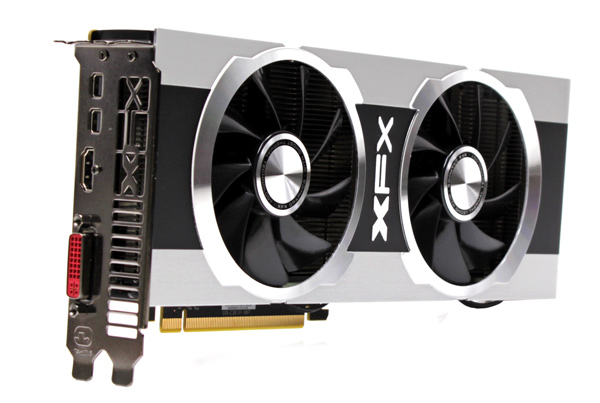 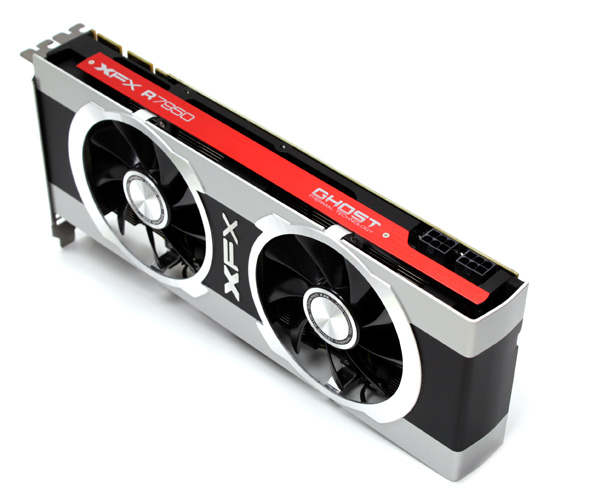 The dual BIOS we’ve seen on the HD 6900 series and HD 7970 cards is not featured on XFX’s HD 7950 card. Good thing about dual BIOS is that you can switch to a different BIOS with a flick of a switch. However, installing new BIOS is done the same way which is why XFX decided to only use Standard Gamer Profile BIOS (this profile has a lower RPM profile that will run warmer but will have lower  Db level on the acoustic), whereas hard core gamers who don’t care about noise can opt on Enthusiast Gamer Profile BIOS.

Registered owners of HD 7950 cards will be notified of the two BIOS options via the 5 Star Support system. It’s great that XFX made a USB_FORMAT.zip package to help make a USB stick DOSbootable in case you don't have it. There are also two additional packages,IOS_SAVE.zip a package to save current BIOS, and BIOS_FLASH.zip to update the card with newer BIOS. We tried it - it works great and is done in about a minute. 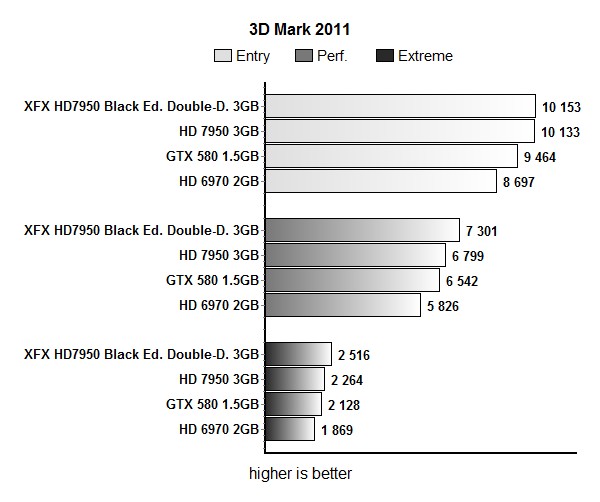 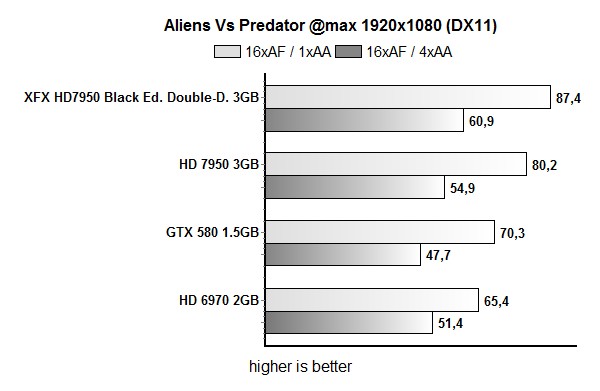 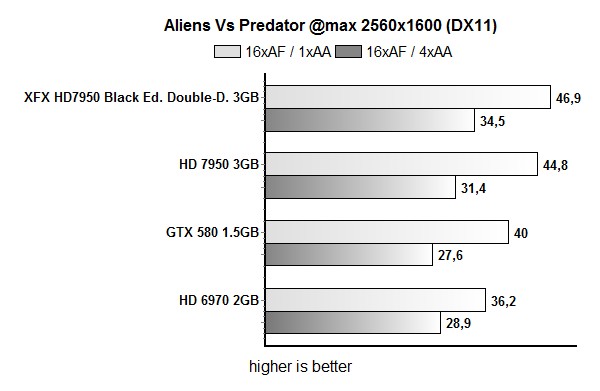 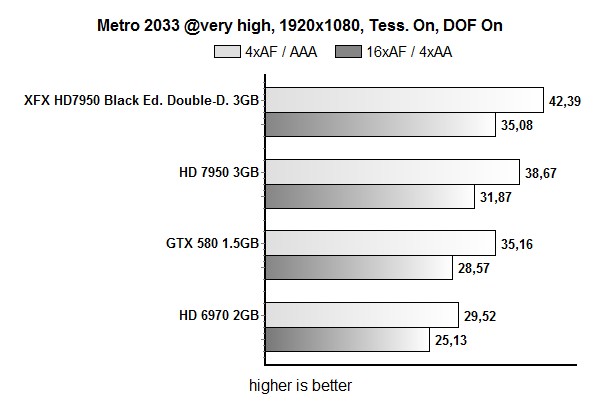 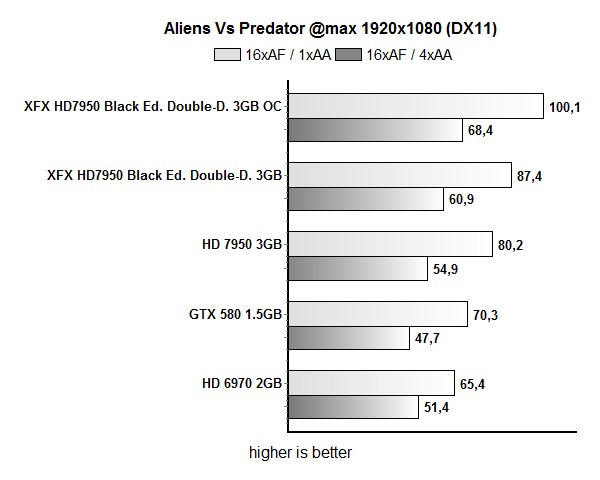 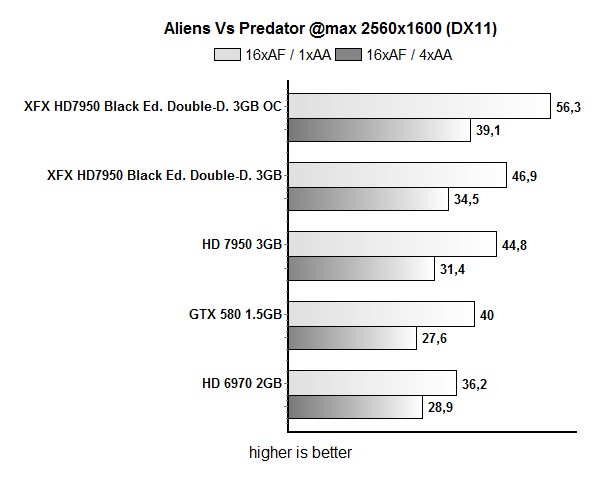 XFX fans are designed to use linear fan speed ramping controls so that fan speeds and temperatures are optimized to reduce excess noise. This helps by preventing sudden fan speed changes that tend to get loud. XFX decided to use a lower RPM profile that will run warmer, but quieter as well. However, the cooler is excellent and GPU temperature didn’t exceed 76°C. While it is not related to performance, we must say that the fans look really cool with the platinum frame. 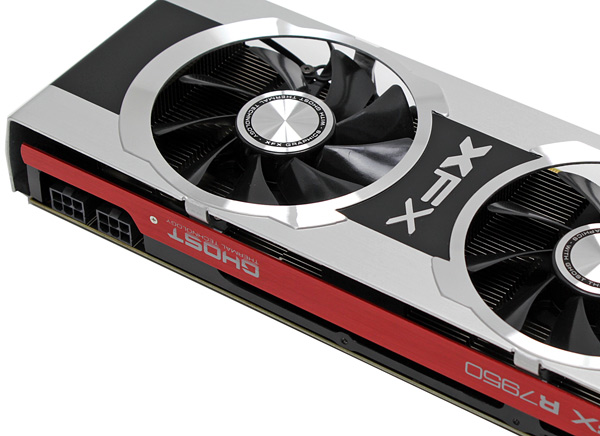 Power consumption looks good. The consumption was slightly lower than on HD 6970 cards, but it’s the performance that sets XFX Black Edition apart here. Note that GTX 580 will consume about 50W more, despite the fact that it is slower.

XFX Radeon HD 7950 Black Edition is faster than any single GPU graphics card launched last year, faster than the HD 6970, and faster than GTX 580. XFX helped the card along by overclocking the GPU by 100MHz, which means that it runs at 900MHz. Gaming performance will not be an issue, although utilizing full potential of the card will require gaming at 1920x1080 and higher. Apart from the great performance, our today’s Black Edition looks great and the finishing touches are clear for all to see.

The HD 7950 Black Edition’s cooler is called Double Dissipation, which basically means it has two fans. XFX made a good BIOS at the last moment so the card runs quietly even under load. Temperatures are great, even though the card runs higher clock speeds. The card comes with 3GB of memory, just like on HD 7970 cards.

XFX Radeon HD 7950 Black Edition Double Dissipation will set you back about $499, which is some $50 lower than the suggested HD 7970 pricing or $50 more than the HD 7950 with reference clocks and lesser cooler.