Review: It’s all about value

Today we’ll have some fun with AMD’s latest desktop APU, the Trinity based A10-5800K. Launched two months ago, the new chip features Piledriver CPU cores with revamped Radeon graphics. It’s also AMD’s first APU to fit the new FM2 socket (904 pins versus Llano’s 905). So obviously Llano users will not be able to upgrade to Trinity without the added cost of a new motherboard. We used MSI’s FM2-A85XA-G65 to run our benches. 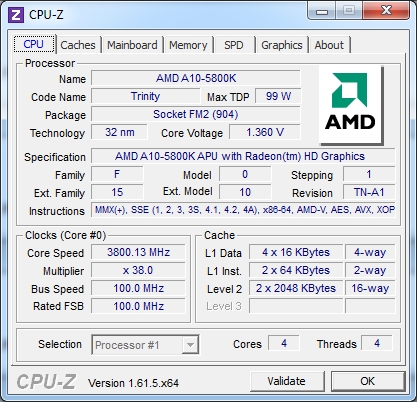 Turbo Core 3 also got an extensive overhaul. It is more advanced than previous versions and it can identify exactly what part of the APU is under the highest load. In other words, it can detect whether more power is needed for the CPU or GPU part, which should translate into better power efficiency, as it will target different parts of the chip independently. 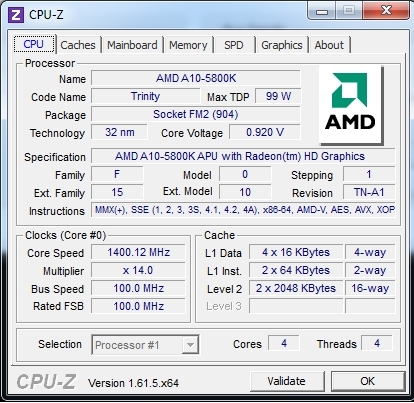 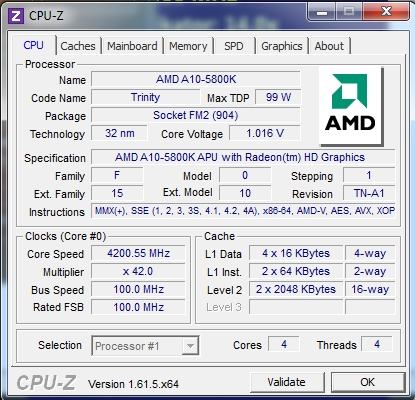 Trinity also supports DDR3-1866MHz memory and the RAM speed has a significant impact on performance. We already proved this in one of our earlier reviews, so check it out if you need more details.

The A10-5800K features HD7660D graphics, based on Northern Islands Radeon HD6000 series GPUs. It features VLIW4 architecture and of course it is DirectX 11 enabled. The HD7660D features 384 shaders and it is clocked up to 800MHz, depending on the load. It also features the UVD3 video encoder,  so it includes a H.264 video encoder and Blu-Ray support.

AMD also allows users to harness HD7660D graphics in tandem with discrete Radeon boards, using the Dual Graphics feature. It basically allows users to boost graphics performance by adding low-end discrete graphics, which is a pretty neat feature for gamers on a budget. AMD Eyefinity is also on board and it delivers 3 + 1 monitor support.

Sadly we didn’t have a comparable Intel CPU handy, so our review will focus on a Trinity vs. Llano showdown instead. 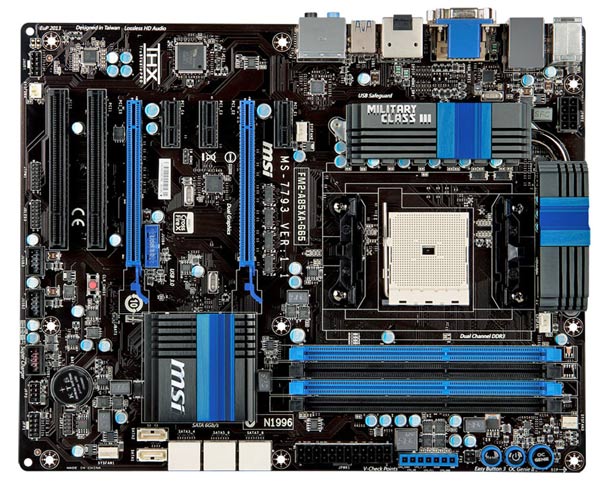 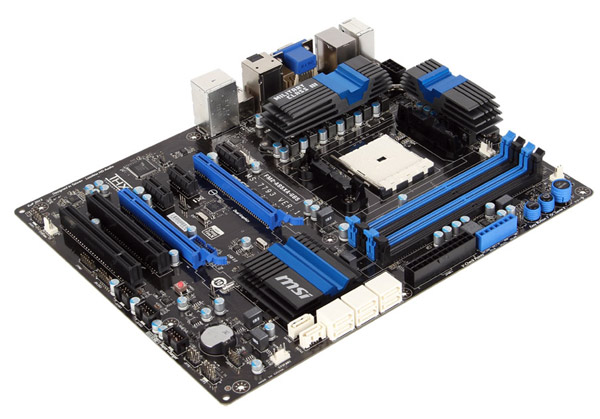 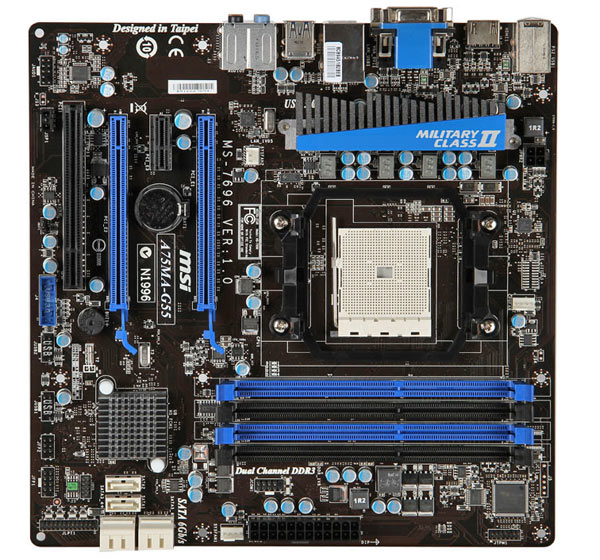 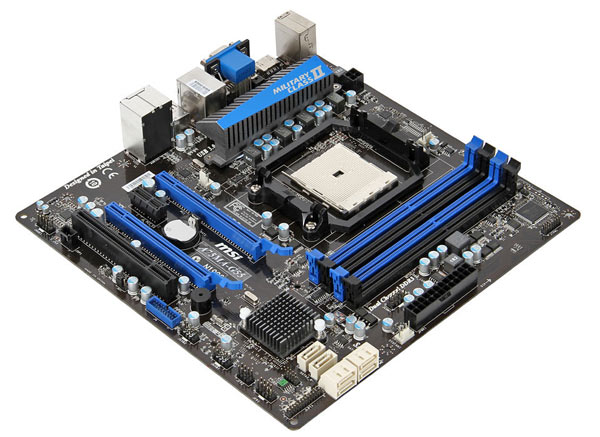 PCMark is a complete PC benchmark that measures overall system performance during typical desktop usage across a range of activities such as handling images and video, web browsing and gaming.

3DMark 11 makes extensive use of all the new features in DirectX 11 including tessellation, compute shaders and multi-threading.

3DMark 11 shows that swapping out CPUs in a rig running HD 7850 will not significantly improve gaming results. Using the A10-5800K resulted in 2 percent higher scores.

The following tests shows that if you’re relying on IGP performance alone, replacing the A8-3800K with A10-5800K is a smart move – the score improved by almost 37 percent.

Heaven Benchmark is a DirectX 11 GPU benchmark based on advanced UNIGINE engine. It reveals the enchanting magic of floating islands with a tiny village hidden in the cloudy skies. Interactive mode provides emerging experience of exploring the intricate world of steampunk. It is the first DirectX 11 benchmark in the world, the original version was released at the moment of Microsoft Windows 7 launch in October, 2009. The distinguishing feature of the benchmark is hardware tessellation, a scalable technology aimed for automatic subdivision of polygons into smaller and finer pieces, so that games gain drastically detailed and more elaborated look.

SiSoftware Sandra (the System ANalyser, Diagnostic and Reporting Assistant) is a 32 and 64-bit Windows system analyser that includes benchmarking, testing and listing modules. It tries to go beyond other utilities to show you more of what is really going on under the hood so you draw comparisons at both a high and low-level in a single product.

The latest benchmark from MAXON, Cinebench R11.5 uses all of your system's processing power to render a photorealistic 3D scene (from the viral "No Keyframes" animation by AixSponza). This scene makes use of various algorithms to stress all available processor cores.

In fact, Maxon Cinebench can measure systems with up to 64 processor threads. The test scene contains approximately 2,000 objects which in turn contain more than 300,000 polygons in total, and uses sharp and blurred reflections, area lights, shadows, procedural shaders, antialiasing, and much more. The result is displayed in points (pts). The higher the number, the faster your processor.

Simply put, x264 HD Benchmark is a reproducible measure of fast your machine can encode a short HD-quality video clip into a high quality x264 video file. It's nice because everyone running it will use the same video clip and software. The video encoder (x264.exe) reports a fairly accurate internal benchmark (in frames per second) for each pass of the video encode and it also uses multi-core processors very efficiently. All these factors make this an ideal benchmark to compare different processors and systems to each other. Read more here.

In the first pass of X264 benchmark encoding tests, AMD’s A10-5800K ran 20 percent faster than A8-3870K. The second pass, which is much more demanding and CPU intensive, reduced the advantage to 7 percent.

Aliens vs. Predator D3D11 Benchmark is a standalone benchmark test based upon Rebellion's 2010 inter-species shooter Aliens vs. Predator. In addition to other DX11 eye candy, the test also heavily relies on tessellation.

There were some differences in gaming scores when the integrated GPU was used, but this wasn’t the case when discrete HD 7850 came into play.

Aliens vs Predator with IGP

We tested the A10-5800K on MSI’s FM2-A85XA-G65 motherboard. First we tried overclocking the CPU, then the graphics and we finished it all off with some memory overclocking. The graphics proved the most troublesome in terms of overclocking. We encountered a few massive freezes, forcing us to power down the test rig. CPU and memory freezes weren’t as serious and we could restart the rig.

Before we overclocked the CPU we switched off Turbo Core and AMD Cool n’ Quiet. We jacked up the voltage to 1.5V and hit 4.6GHz with relative ease. With better equipment and know-how, it should be possible to push the chip even higher, but even the 4.6GHz clock resulted in significant benchmark gains. Bear in mind that the same APU on the same MSI board managed to hit 7.3GHz with some LN2 cooling. However, the clock was attained only after two out of four CPU cores were disabled. 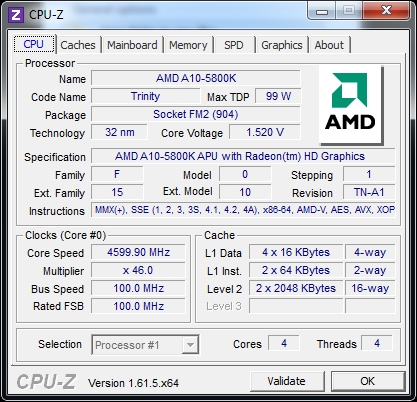 In any case, Cinebench shows improvements after our relatively mild overclock. The single thread results went up by 11 percent, while the multithread test shot up by 18 percent.

The CPU overclock did not have much effect in gaming, since the GPU clock was not changed. We saw practically no difference in Crysis 2 or AvP, but in Sniper Elite 2 we saw some improvement. Basically if you are trying to squeeze out more performance in games, it is crucial to overclock the memory and GPU.

Memory speed is very important for graphics performance, so we tried playing around with some Corsair DDR3 1600 modules, clocked at 1033, 1600 and 1866MHz.

Extensive bios settings allowed us to measure the effect of memory speed on overall performance, with no changes to CPU or GPU clocks. There is no official support for DDR3 2400 memory, but we gave it a try anyway. We used Corsair Vengeance CMZ8GX3M2A2400C10 memory and increased the FSB clock to push the clock beyond 2133MHz. Sadly though, we got to 2133MHz, but we could not start the system at 2400MHz.

We managed to get DDR1866 speeds from Corsair Vengeance LP modules, rated at DDR3 1600. As you can see, the results of memory overclocking (DDR3 1866) are clearly visible in bandwidth numbers.

Overclocking the memory from 800MHz to 933MHz improved the gaming scores up to 14 percent. This number is closer to 30 percent when you compare 666MHz and 933MHz memory.

Overclocking the memory from 800MHz to 933MHz improved the gaming scores by about 8 percent. This number is closer to 18 percent when you compare 666MHz and 933MHz memory.

Overclocking the memory from 800MHz to 933MHz improved the gaming scores up to 14 percent. This number is closer to 17 percent when you compare 666MHz and 933MHz memory.

We also tried boosting the GPU clock from 800MHz to 950MHz, but as you can see in our results, memory overclocking had a much bigger impact on performance. AMD claims the GPU can be pushed north of 1GHz, but it seems we just ran out of luck and didn’t cross the 1GHz threshold. 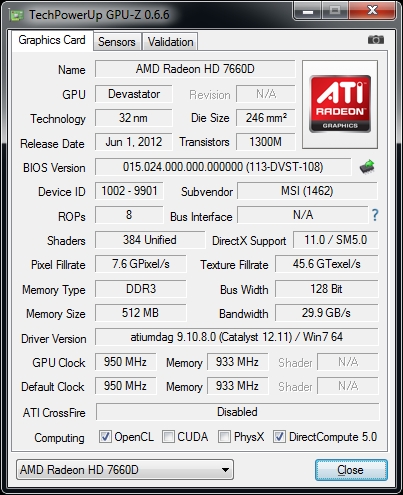 With a CPU clock of 4.5GHz, memory at 1866MHz and the GPU clock at 950MHz, we managed to get some impressive results. We got playable frame rates at 1680x1050, but just barely, since we had to reduce detail levels to attain them. Of course, bear in mind that we are talking about integrated graphics, so the results are actually pretty good. Just a few years ago, you couldn’t get close to decent frame rates in last generation games on any IGP.

While idling, the Trinity-based A10-5800K proved much more efficient than the Llano generation. However, under full load we still see pretty high consumption, but the A10-5800K also delivers significantly higher performance over the A8-3870K.

The AMD A10-5800K is designated as an "Accelerated Processing Unit," which basically denotes a CPU coupled with integrated graphics. This particular SKU is the A-series flagship for 2012. CPU performance is on par with the FX 4170, but of course the A10-5800K also packs integrated graphics.

Pitted against Llano’s HD 6550D, the HD 7660D delivers up to 33 percent performance boost. However, it is still just an integrated solution, so it doesn’t have enough muscle for 1080p gaming. Older games, casual titles and even some less demanding current-gen games should be playable though. So for casual gamers who want to avoid the cost and noise involved in discrete graphics, the HD 7660D should be good enough, almost as good as entry level discrete cards.

However, Trinity’s new Pildedriver cores don’t offer the same improvements over Llano. In some CPU tests the old A8-3870K even outperformed the A10-5800K, but on the whole the latter is somewhat faster.

Since memory speed has a significant effect on overall performance, our advice is to go for 1866MHz modules, or at least 1600MHz. With record low memory prices, investing in somewhat faster modules could result in significant performance gains at a very low cost.

Speaking of costs, the A10-5800K can be yours for about €110 in Euroland, or $120 in the US. Coupled with a mid-range FM2 motherboard, the platform cost is still relatively low, under €/$200 in most cases. What’s more, even low-end boards are feature packed, which is not always the case with Intel motherboards in this price range. Bear in mind that quad-core Trinity chips are also available in 65W flavor, which was not always the case with Llano. The bad news? Well, owners of FM1 boards won’t be able to upgrade their Llanos.

Overall Trinity is a step in the right direction. It’s not revolutionary, it’s basically Llano done right, and it still offers unbeatable value for money.