We were informed of a rather interesting deal in which the HD 7990 Malta graphics card is sold for an incredible price of €469 inc. VAT. The price cut follows the recent push to get rid of the HD 7900 series that should be soon replaced by AMD's newest R9-series of graphics cards.

Unfortunately, this deal is currently limited to Alternate.nl and as long as supplies last, but we were also informed that it might even extend to Alternate in Germany and even maybe Poland. This puts the HD 7990, at least the one from the deal, below the price of the GTX 780 and since AMD has started to actively fix micro-stuttering issues it definitely sounds like a great deal, especially considering that you get quite a few games from AMD's Never Settle bonanza.

Previously, all partners dropped the price of the HD 7990 down to US $699 in an aggressive move against the GTX 780. The AMD Radeon HD 7990 features two 28nm fully enabled Tahiti GPUs for a total of 4096 stream processors and 6GB of GDDR5 memory (3GB per GPU). The GPUs are working at 950MHz base and 1000MHz Boost clocks and while 6GB of GDDR5 memory paired up with 2x384-bit memory interface ended up clocked at 6000MHz.

Currently in most of Europe the HD 7990 goes for anywhere between €520 and €620 depedning on the retailer and the actual region. Hopefully, more partners will follow Club3D's move.

You can find it over at Alternate.nl. 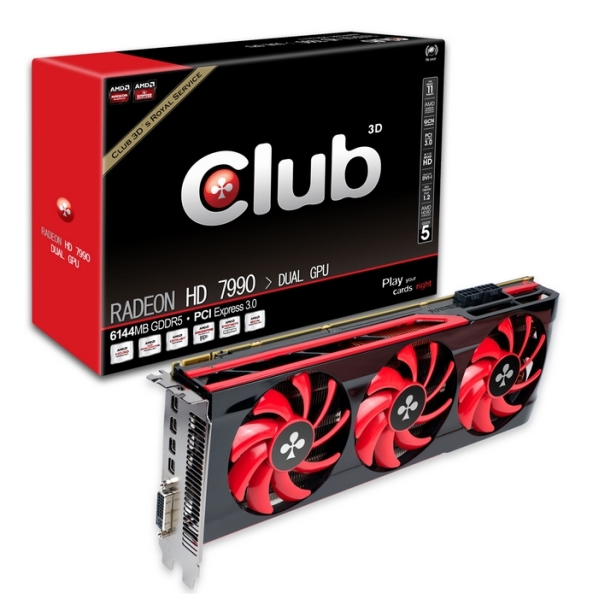 Last modified on 30 September 2013
Rate this item
(0 votes)
Tagged under
More in this category: « Newegg offers great deals on HD 7900 graphics cards AMD believes that 3D stereoscopic gaming is done »
back to top