Since there's no set-in-stone method of testing cases, we thought it's best to go the practical way. We've been using our HAF X for more than a month and it's been our faithful compadre throughout other tests as well.

Without blinking – in fact, HAF X is our first case that could comfortably take EVGA's x58 Classified 4-Way SLI motherboard, which is 34.5cm long. 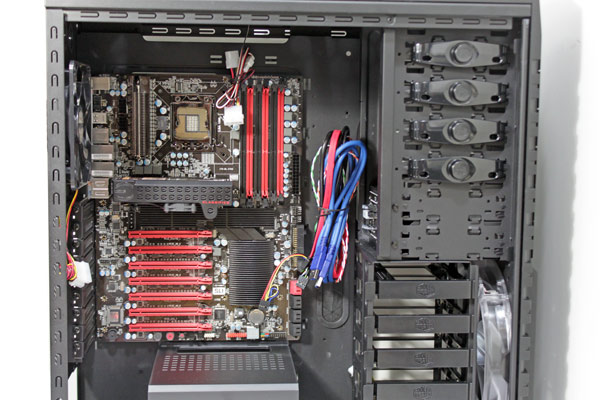 As the motherboard’s name states for itself, Classified 4-Way SLI can take up to four graphics cards. Unfortunately, if all four are dual-slot, then it won’t fit in HAF X. The reason is that the first PCI-E slot isn’t at standard distance from the CPU socket but rather positioned a bit lower, leaving the first two slots on the case unusable. The last slot on the motherboard is in line with the last slot on the case, so it will take only single slot cards. This is very important for 4-Way SLI graphics setup owners and the same goes for Gigabyte’s GA-X58A-UD9; just like EVGA’s, this motherboard requires 10 expansion slots for a 4-Way VGA system (with dual slot cards). 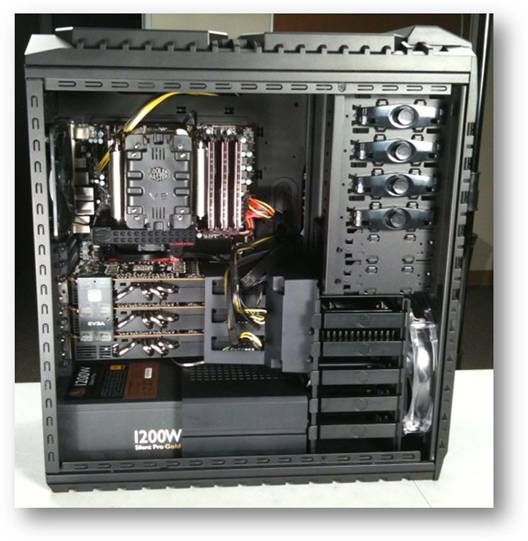 What is the maximum CPU cooler height supported?

Your CPU cooler of choice should be up to 190 mm high, and mounting it should not be a problem as the case has a hole in the motherboard tray. 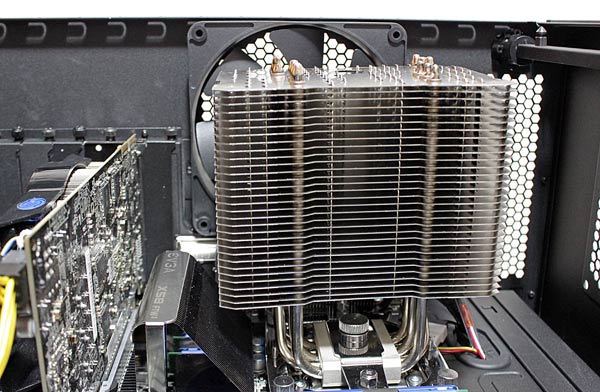 Regarding the hole in the motherboard tray behind the CPU, it was big enough for all motherboards that we have tried except for the extraordinary big EVGA 4-Way Classified, as you can see from the picture below. 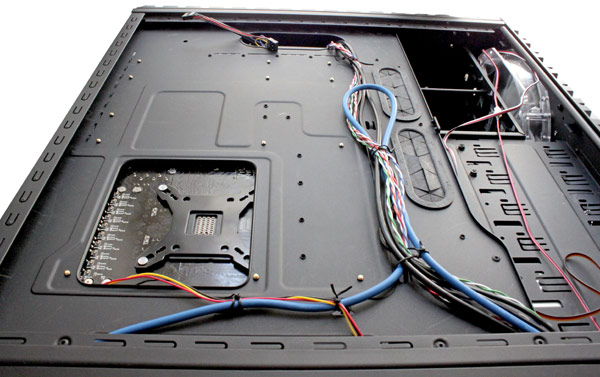 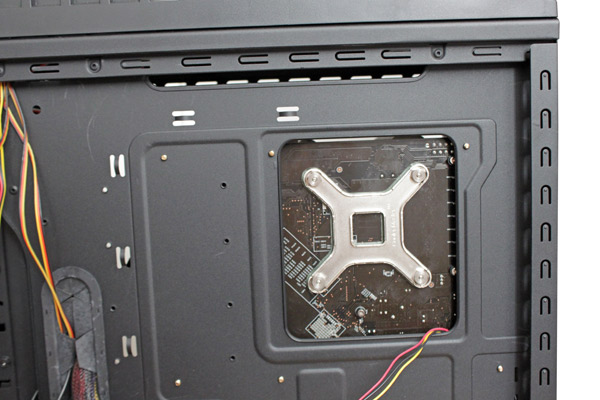 Without a doubt – you’ve got all the headroom you need. In fact, currently longest graphics card, the HD 5970 (picture below), will fit without problems. Video cards can be up to 322 mm. Note however that the card’s length renders the Air-Duct unusable. 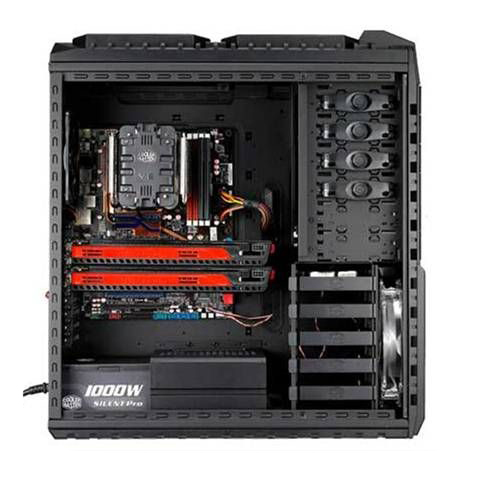 Air duct is basically a piece of plastic with room for a 120 mm fan, which helps with cooling. On the other hand, HAF X already boasts enviable airflow, so the Air duct is probably an overkill if you’re using only one graphics card.

The holes on the side are used to route power cables, as most newer graphics cards come with power connector(s) on top, rather than at the end, which was the case with the 9800GT (picture below).

We used Gigabyte’s passively cooled Geforce 9800 GT card, where Air duct lowered idle GPU temperature from 41°C to 40°C and operating temperatures from 73°C to 70°C. We strapped our Air duct with CoolerMaster’s 120 mm A12025-22CB-6AP-C1, which ran at maximum RPM like the rest of the fans in our test. 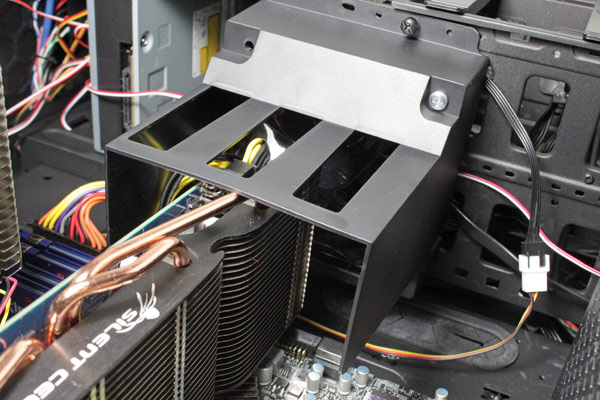 Note that the Air duct should have maximum and probably optimum impact in rigs with two or three dual slot graphics card, since such setups are usually a bit crammed and in dire need for fresh air. Such scenarios should really like the Air duct although you can’t use them with HD 5970 cards, due to the card’s length.

The Air duct’s main task is to cool graphics cards, but it indirectly affects hard disk temperatures. Most of this is reflected on the disks in hot-swap bays, as they aren’t cooled by the front 230 mm fan.

In order for the hard disk, or an SSD drive, to be cooled by the Air duct, the latter must be positioned higher so that the air reaches the bays (like on the picture below). Thanks to the Air duct, we recorded 2°C lower temperature on the hard disk in the hot-swap bay (36°C without and 34°C with the Air duct). 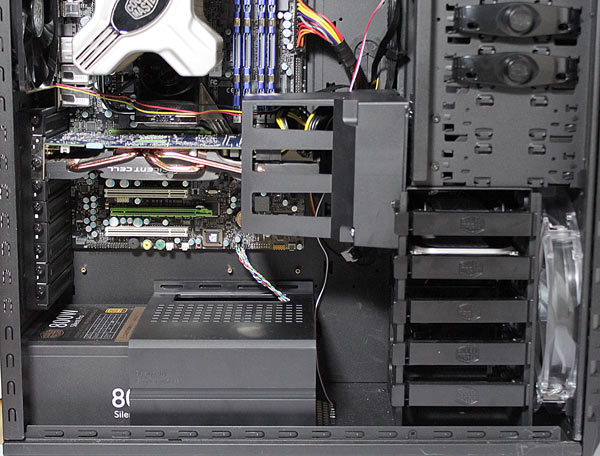 The Air duct will help with cooling hard disks in 3.5'' drive bays, but you'll have to mount it to be level with the disks.

The picture above shows the case where Air duct didn’t improve hard disk thermals; the HD was mounted in a second bay from the top, so the Air duct can’t reach it. We performed an hour of Everest’s “Stress local disks” which pushed the temperature to about 32°C. After we moved the HD one spot up, the temperature dropped to 31°C.


Will the side panel fan’s Air duct get in the way of tall VGA coolers?

The side panel fan’s Air duct is a useful addition that’s fixed to the fan via four screws – so if it bothers you, you can take it off in a minute. In most cases you won’t find it to get in the way and it will cool all reference design graphics. Furthermore, it can easily be combined with the previously discussed Air duct. The only problem you might encounter is if you’re using extremely tall non-reference coolers, such as Thermalright’s Spitfire, as the Air duct won’t let the panel back in place (picture below). 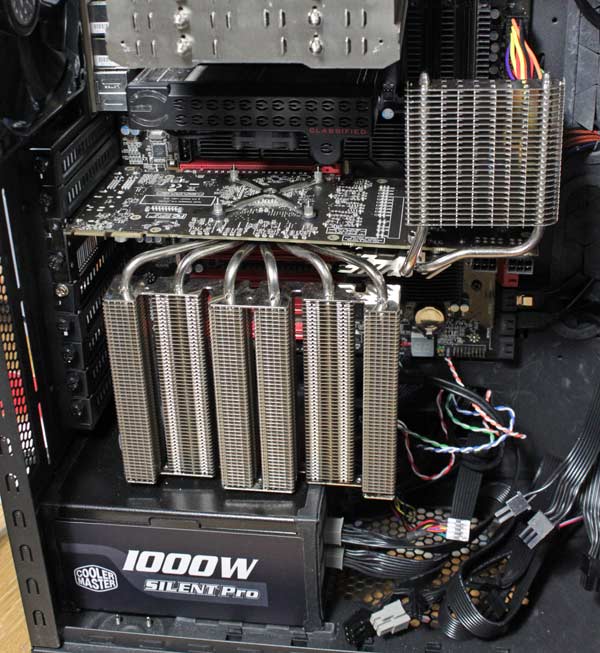 After taking the Air duct off (picture below), the “problem” was remedied. Good news for those who own or are looking to buy Thermalright’s Spitfire VGA cooler is that, thanks to HAF X’s size, the cooler can be turned downwards (like on the picture above), which means there’s no need to buy a smaller CPU cooler. Note that Spitfire is indeed huge and will fit in most cases only when turned upwards, but there’s a risk of it getting in the way of tall CPU coolers. 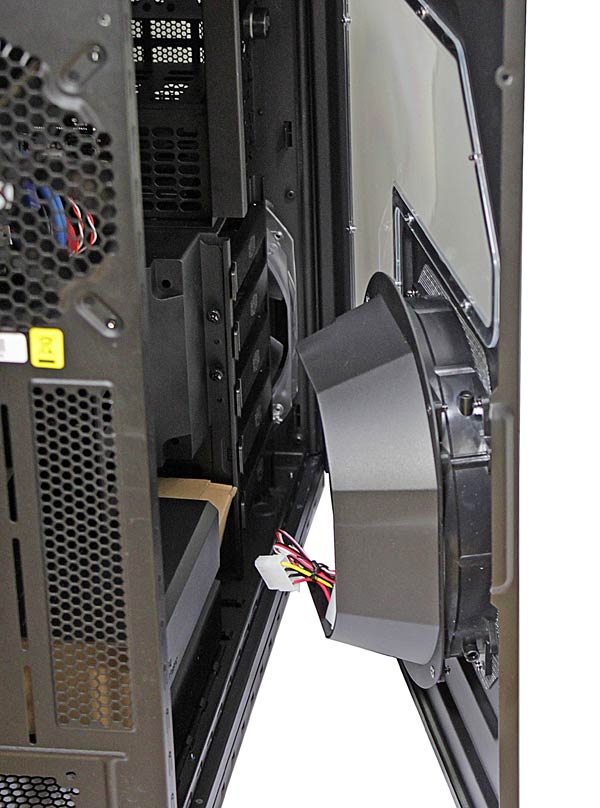 After we took the Air duct off, there was enough room for another fan on Spitfire, meaning there’s plenty of room left in the HAF X.


Will an Air duct mounted on a side-fan affect GPU temperatures?

The side fan’s Air duct comes mounted like on the picture below – with a channel on the side facing the power connectors. This is done so that PCI-E power cables can be connected to PCI-E connectors on the graphics card. 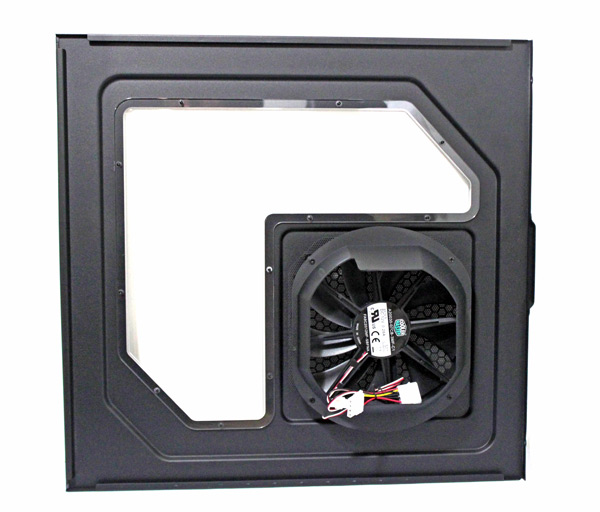 With our 9800 GT we had no worries about whether the cables are touching the Air duct as the connectors are placed at the end of the card. So, we pretty much tried every possible Air duct position to see just how it affects the CPU (Core 2 Extreme X6800 with passive cooler CM Hyper Z600) and graphics (9800 GT passive).

The Air duct’s default setup, which is blowing air towards the end of the card, hasn’t proven to be effective with our passively cooled 9800 GT. FurMark managed to push the GPU up to 90°C whereas the CPU reached 79°C under Prime95.

We then rotated the Air duct by 180°, so that the air flows towards the case’s back panel, GPU temperatures ducked to 86°C but CPU temperatures climbed from 79°C to 81°C.

Naturally, the CPU is best cooled when the Air duct is positioned to blow directly at it. In this case, CPU temperature was at 74°C  and the GPU hit 87°C.

Our passively cooled 9800 GT really liked when we pointed the Air duct downwards. GPU temperature was at 84°C but the CPU was at the hottest point in our test (82°C).

The difference between using the Air duct in its default position and using just the fan (without the duct) amounted to 3°C (on the GPU).

With all the fans running at maximum RPM and the Air duct in its default position, our 9800GT’s temperatures didn’t go over 73°C in FurMark. The same scenario saw our passively cooled Core 2 Extreme X6800 at 62°C. We compared these results to those scored by HAF 932 case, where the GPU ran at 74°C and the CPU at 59°C. We suspect that HAF 932’s bigger fans (230 mm fan on top and a 230 mm one on the side panel) are responsible for this.

CoolerMaster really wanted to make sure that HAF X does anything and everything to improve graphics cooling. It’s time to talk about the VGA bracket with an 80mm fan. 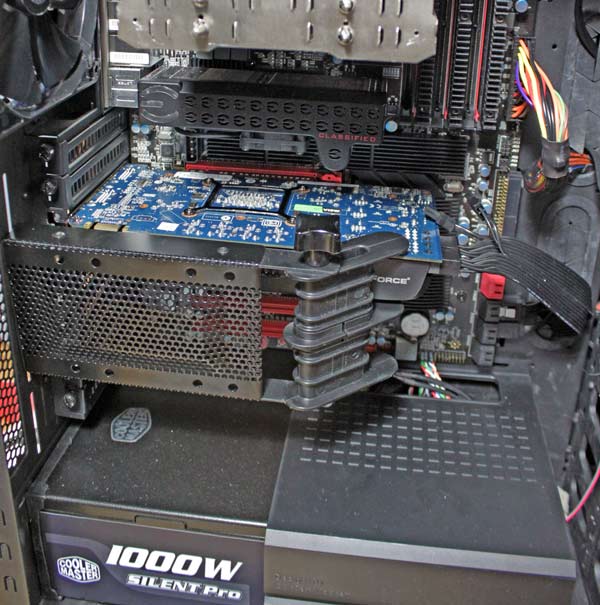 Additionally, those who have more graphics cards will find the VGA bracket to come in handy during transport, as it lessens the strain on the PCI-E slots.

« Prev Next »
Last modified on 24 September 2010
Rate this item
(7 votes)
More in this category: « Cooler Master Storm Inferno tested Phenom II X6 in the lab »
back to top