The PCS+ R9 290 looks powerful and feels promising. Once you pick it up it feels great because the shroud and the backplate are metal rather than plastic. The cooler is two and half slots wide.

The card, including the cooler, measures 295mm x 111mm x 46mm. Note this is longer than the reference design and we advise you to check whether this card fits into your case. That also makes the card rather heavy, but since it is a high-end product this is not a shortcoming. In fact, many enthusiasts still stick to the ‘heavier is better’ mantra whether they are talking about PSUs or audio components. The card weighs in at 1kg but still it is a featherweight compared to the Devil 13 HD 7990, which weighs 1.77kg, believe it or not.

By using an oversized PCS+ cooler PowerColor wanted to make sure that the factory overclocked GPU would not throttle when it heats up. This is the case on reference R9 290X and 290 cards, which tend to drastically reduce the clock in load scenarios. The reference design features a rather problematic cooler which takes a big toll on performance, unless you manually increase the fan speed in which case it gets quite noisy and unsuitable for home use. With the reference cooler the GPU quickly heats up to 94 degrees Celsius, but AMD claims the GPU still remains within its thermal operating range. AMD didn’t go all out on the reference cooler, so the GPU can barely maintain 1000MHz on the reference R9 290X, or 947MHz on the 290 for that matter.

Thanks to its massive non-reference cooler, the PowerColor PCS+ R9 290 is immune to these issues. Although the card ships with a substantial factory overclock, it can maintain the GPU clock at 1040MHz regardless of load.

PowerColor settled on the PCS+ a three-fan cooler that might be the most powerful air cooler placed on a R9 290 card. PowerColor says that the custom cooler should reduce load temperatures by up to 24%, with a noise reduction of up to 17% compared to the reference design.

The top of the card is quite attractive. Here we see the card uses one 6-pin and one 8-pin power connector. According to AMD the reference R9 290 will draw a maximum of 275 Watts. The shroud is open on all sides and the openings serve as exhaust vents. 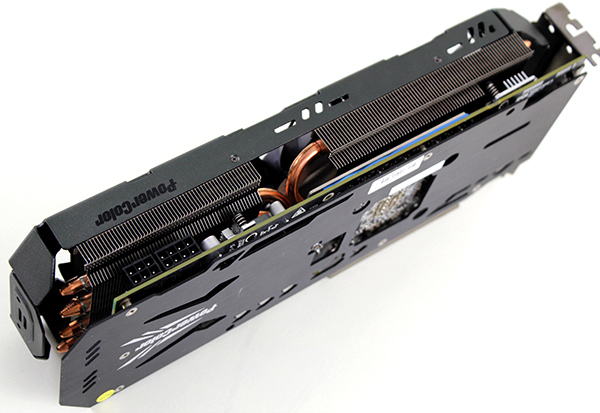 Textured details, made by cutting the metal shroud, are a nice feature on the backplate. It’s a small touch, but we like it.

The fans take up one slot, while the heatsink takes up one and half slots. That helps create a bigger dissipation surface, but it also adds a lot of bulk. 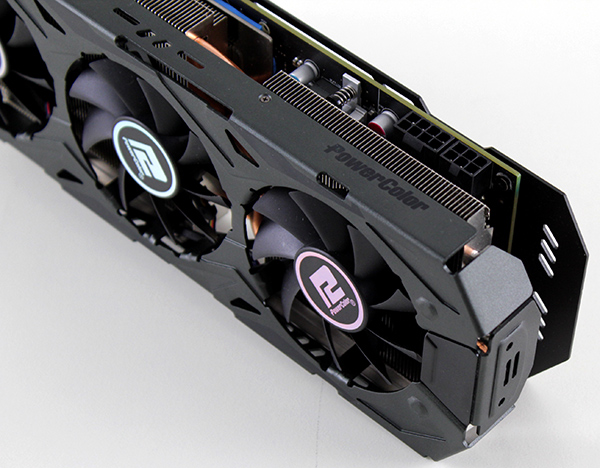 Fan RPM can be regulated via Catalyst Overdrive. All the fans are connected using a single 4-pin connector. PowerColor uses double bladed fans on the PCS+ R9 270 (image below), and claims the double-blade design can focus airflow into the center and increase airflow by up to 20 percent compared to traditional designs. But those are 8.5cm, lower RPM fans and unfortunately three such fans cannot be fitted on the PCS+ R9 290. 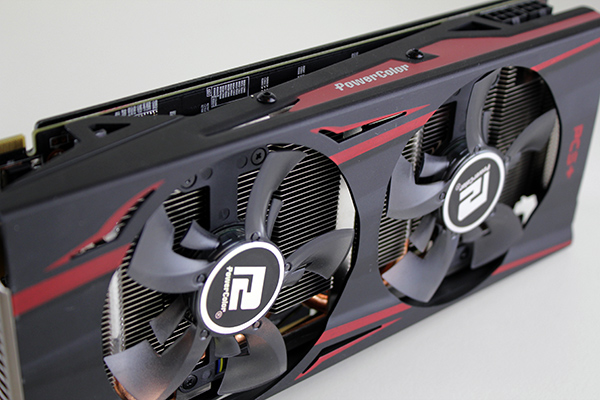 We always advise users to clean the heatsink on a regular basis. It’s good for the card and it also helps keep fan RPMs as low as possible. Accessing the heatsink is relatively easy. You can remove the shroud along with the fans simply by undoing four screws that keep them attached to the heatsink. There is no need to remove the entire cooler. 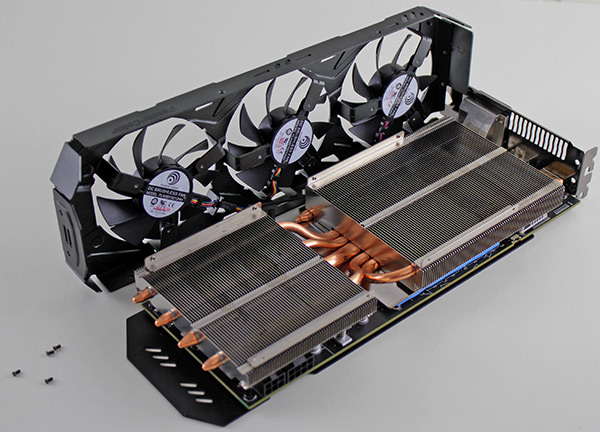 Here you can see the heatsink. Everything feels solid and very precise indeed. 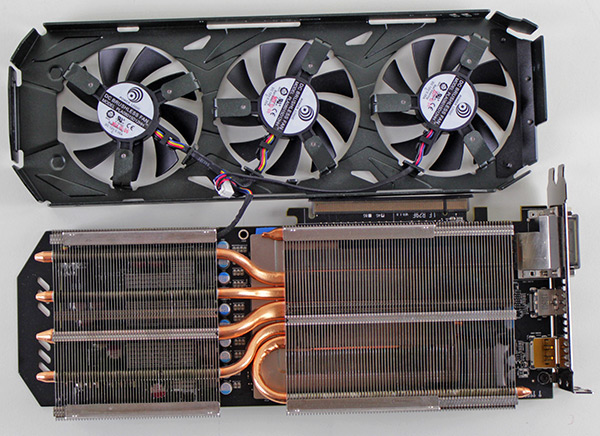 The PCB is equipped with digital PWM in order to decrease ripple and enhance power efficiency. DirectFET will minimize conduction losses and the multi phase design (5+1+1) enhances power efficiency and stability. Considering the hefty factory overclock, the emphasis on tweaking the card’s power system is understandable. 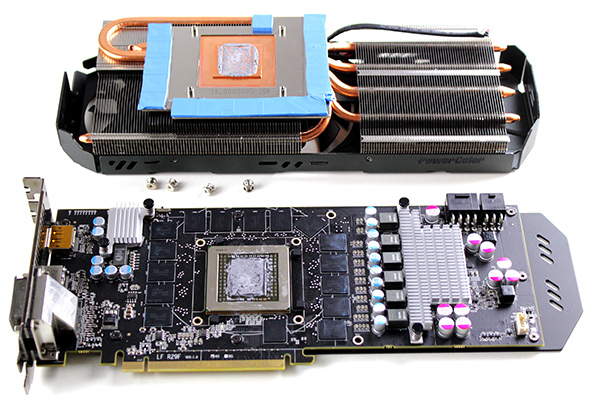 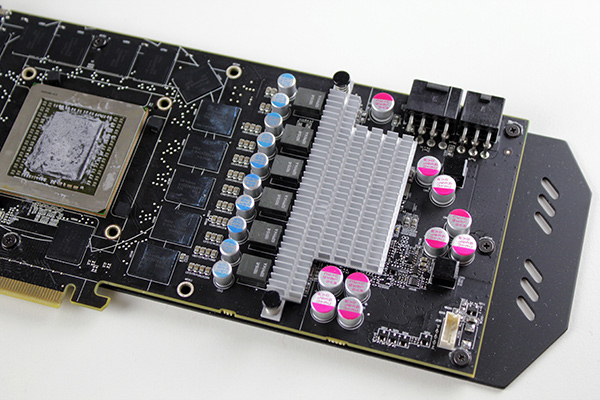 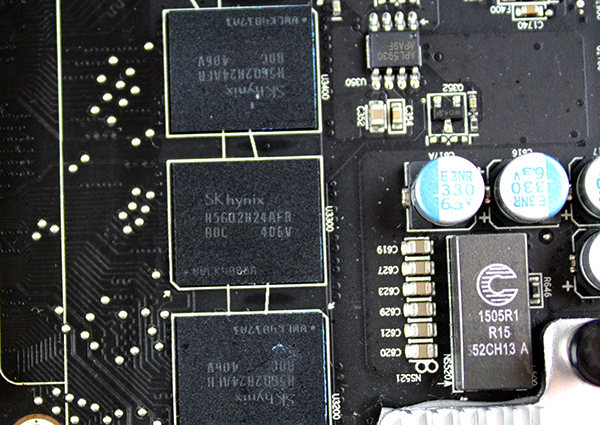 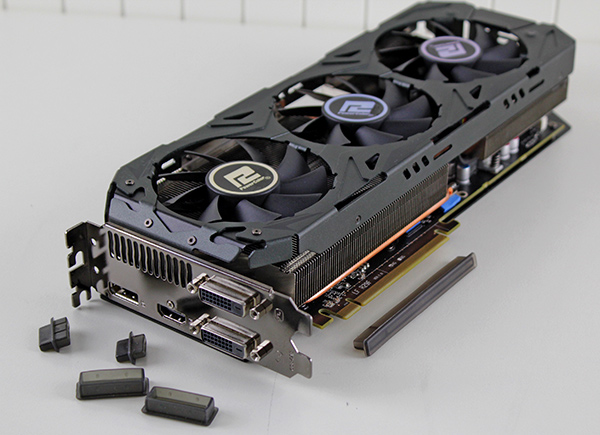 On the I/O panel you will find one standard DisplayPort, one standard HDMI and two dual-link DVI connectors. Next generation 4K (4096x2160) and UHD (3840x2160) resolutions are supported, making the card future proof to some extent. The biggest problem is the relatively high price of 4K/UHD monitors, as they are still too pricey for most gamers. On top of that, anyone willing to invest in a 4K/UHD monitor can probably afford a an even faster card.

You can also use any combination of display connectors or use four outputs at the same time. It is possible to chain up six monitors when using an MST hub. An HDMI 1.4a compatible sound device is built in the GPU, which also includes HD audio and Blu-ray 3D movies support so there is no need to connect the card to your motherboard’s/soundcard’s SPDIF out to get audio and video via HDMI.

The R9 290 lacks Crossfire connectors. AMD correctly assumes that most owners will use their R9 290 on PCI-E 3.0 motherboards that have plenty of bandwidth to ensure communication between two or more R9 290 cards. The decision to drop the connectors also saves a couple of bucks in production costs for AMD and its AIB partners. It also results in a ‘cleaner’ design with fewer points of failure. 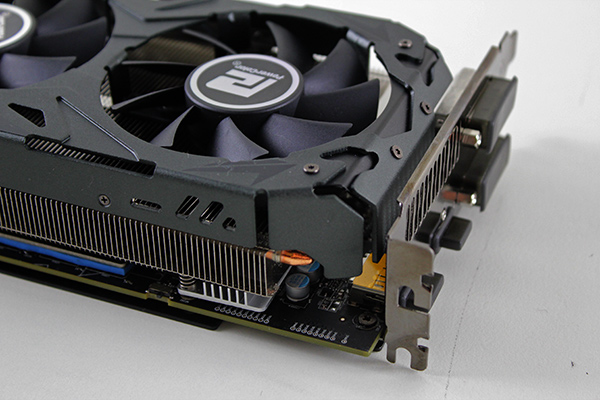 The dual BIOS switch is used only for changing between the UEFI and standard BIOS.