To get full profile OpenCL 1.1 conformance


ARM has submitted its Mali-T604 GPU to Khronos in order to get Full Profile OpenCL 1.1 conformance, bringing desktop GPU computing features to the mobile, embedded and smart-TV markets.

ARM is actually the first GPU supplier to submit its GPU for Full Profile OpenCL conformance with Khronos, an organization that handles Full Profile and embedded profile OpenCL 1.1 certification. According to ARM, GPU computing is a growing trend that uses the performance of the GPU in order to augment the CPU for certain applications where the GPU is more effective thus providing improved performance and energy efficiency.

ARM claim that Full Profile brings a lot of gains as all desktops, notebooks and servers actually implement Full Profile rather than embedded profile. Most of the existing OpenCL software is actually written for Full Profile platforms and there are quite a few features that are optional in Embedded Profile including native support for 64-bit integer maths that will be much faster and more efficient as they are implemented in hardware, hardware accelerated support for 3D images, compliance with IEEE 754-2008 precision as well as built-in atomic functions accelerated in hardware which speeds up parallel computation as they are handled directly by hardware.

The Full Profile OpenCL driver is more attractive to developers as they do not need to worry about which features are supported and which are not, and it generally reduces the cost for developers. Of course, Embedded Profile code will also run without any problems.

The Mali-T658 and Mali-T604 GPUs have been announced quite some time ago and are ARM's fourth generation GPUs that are based on Midgard architecture. The Mali-T604 is said to deliver up to five times performance improvement over previous generation and have been specifically designed for GPGPU-based application. In terms of specs, ARM's Mali-T604 has multi-core scaling as it can feature up to four shader cores, has 32KB to 256KB of configurable L2 cache, built-in Memory Management Unit (MMU) with support for virtual memory, has support for OpenGL ES 1.1/2.0, OpenVG 1.1, OpenCL 1.1, DirectX 11 and Renderscript and supports 16xFSAA and 4xFSAA (4xFSAA with minimal performance drop) anti-aliasing. 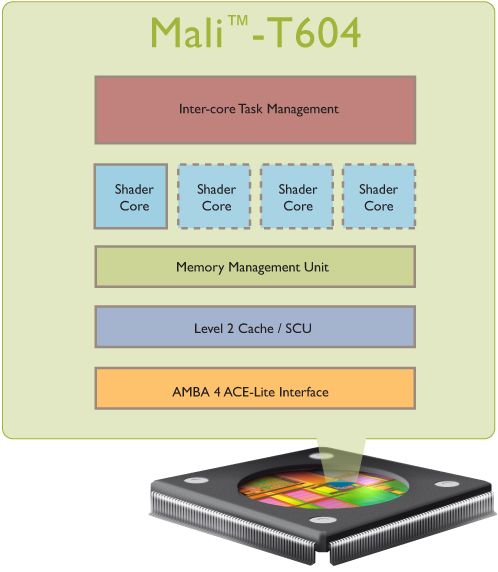 ARM's Mali-T604 is expected to debut in Samsung's Exynos 5250 SoC, previously scheduled to go into mass production in Q3 2012.