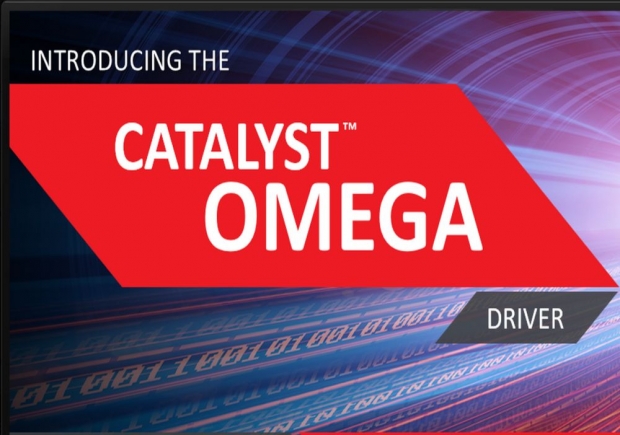 AMD has released its newest Catalyst Omega graphics driver, which marks a major driver update, the biggest in quite some time and brings a rather neat list of performance improvements, bug fixes and, most importantly, new features. 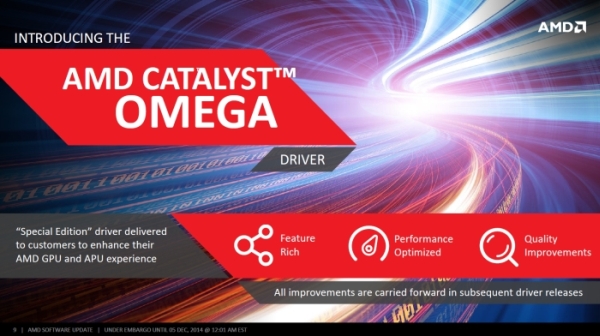 The performance improvement list is not as big as we hoped, considering that this is a major driver update and, according to release notes, the new AMD Catalyst Omega driver comes with new frame pacing improvements for Dual-Graphics and Crossfire configurations in games like Batman: Arkham Origins, Tomb Raider, Sniper Elite 3 and Metro as well as performance improvements of up to 19 percent in Bioshock Infinite, up to 11 percent in Call of Duty: Ghosts, up to 9 percent in Rome 2: Total War and Sniper Elite 3, up to 8 percent in Grid 2 and up to 10 percent in Batman: Arkham Origins game. 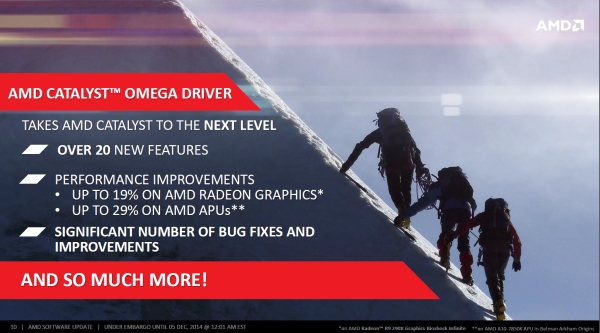 There are also several performance improvements ranging from 5 to 29 percent for AMD APUs in several different games with the new Catalyst Omega driver. AMD also fixed some bugs that were seen in the Catalyst 14.9 driver including fix for Google Chrome, which sometimes crashed while running online flash videos, problem with display failing to wake up after sleep mode, crashing on 144Hz displays in AMD Crossfire configurations, game stuttering or screen tearing in Quad-Crossfire configurations and some other less important bug fixes.

With the new Catalyst Omega graphics driver, AMD introduced Virtual Super Resolution, or the VSR. Although not quite new and unseen feature, since Nvidia already has the pretty much the same feature with DSR, Virtual Super Resolution renders games at a higher resolution and scales them down to the screen resolution, which should in the end result in better looking graphics quality but at a rather big performance hit. Similar supersampling techniques have been used in off-line rendering for decades.

We will definitely try out the VSR and check out how big that performance hit actually is. 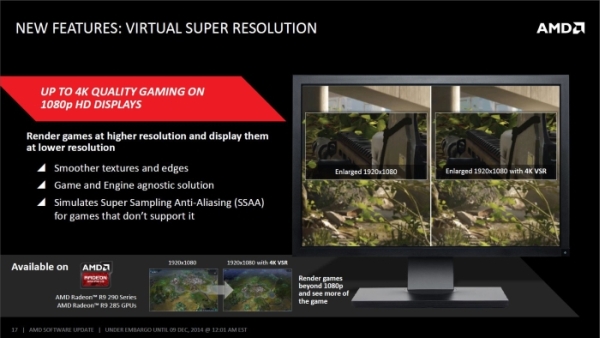 AMD has also brought the support for 24-display Eyefinity with the new AMD Catalyst Omega driver as well as an official support for 5K monitor support. Both of these are pretty much self explanatory as the 24-display Eyefinity now allows you to support up to 24 displays on 4 GPUs under Windows OS, while the 5K display support is there for the recently introduced Dell 5K UP2715K monitor with 5120x2880 resolution, at 60Hz and via two DisplayPort 1.2 outuputs. 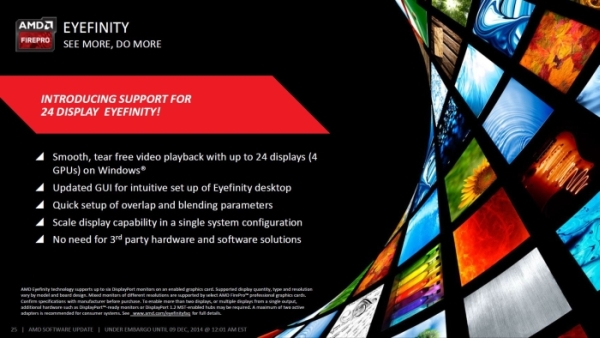 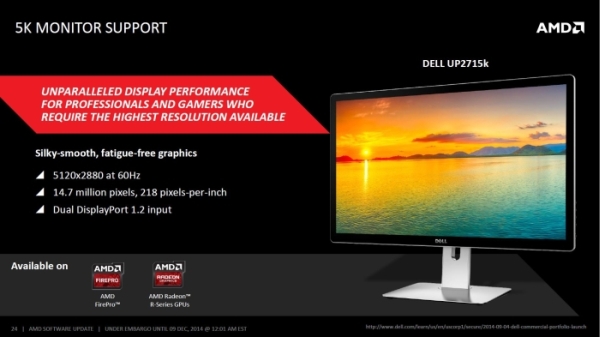 The new Catalyst Omega driver also brings official support for FreeSync, a project AMD announced a while ago. Unfortunately, FreeSync-enabled monitors are still not available but at least the feature is now officially announced and supported with the new Catalyst Omega drivers. In case you missed it, FreeSync-enabled monitors are expected in a few weeks and these monitors should remove stuttering and tearing in games, similar to Nvidia's G-Sync. 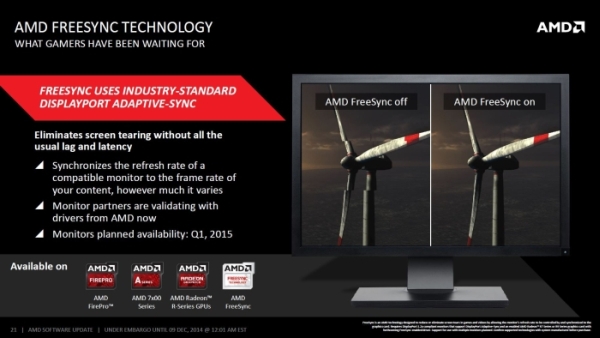 The new Catalyst Omega driver also brings plenty of video playback enhancements including number of new algorithms that should provide smoother video playback, reduce judder, remove compression artifacts as well as bring 1080p detail enhancements and a couple of other features. The new driver also brings a new version of the Gaming Evolved client which has Mantle API support and video editor. 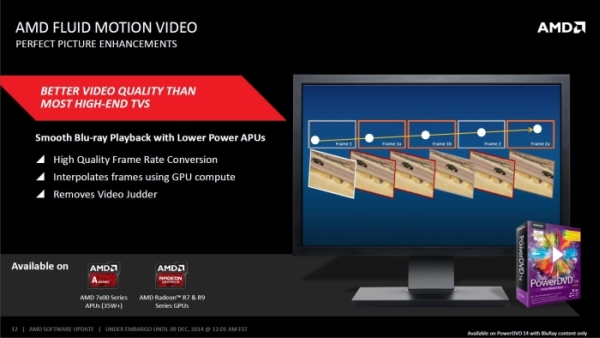 AMD was also quite keen to note that the new AMD Catalyst Omega graphics driver will bring a couple of features for developers as well. The list includes the new TressFX Hair 3.0 as well as OpenCL 2.0 and CodeXL 1.6 support. AMD is still pushing hard with its Mantle API which is now supported in four game engines, seen or to be seen in 20+ games and with close to 100 registered developers in Mantle Beta program. 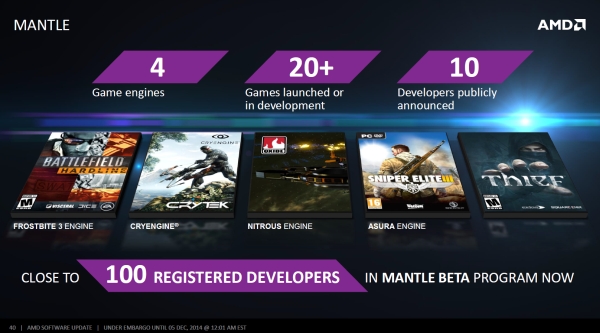 While TressFX was quite nice looking back when it rendered Lara's hair in Tomb Raider, TressFX 3.0 now brings fur support on skinned geometries. 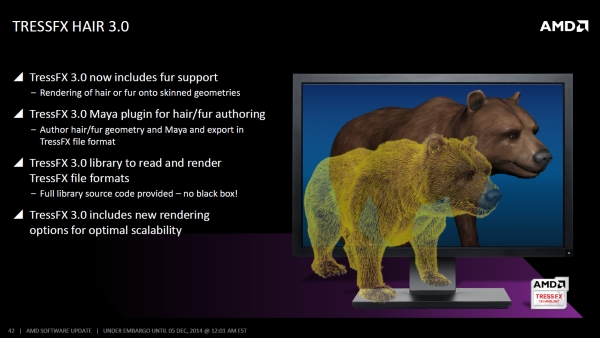 Quite a big push by AMD

As it was the case with some of the previous AMD Catalyst graphics driver releases, this one also supports all the desktop graphics cards since Radeon HD 5000 as well as all of AMD APUs and AMD Mobility notebook Radeon GPUs since HD 5000 series. It is available for Windows 8.1 and Windows 7 OS in both 32-bit and 64-bit versions.

You can find the new AMD graphics driver over at AMD's support page.