In the final week of 2011, the graphics hardware community was abuzz with an interesting rumor that AMD may have been concealing some truth behind the architectural capabilities of its recently [paper]-launched Radeon HD 7970 GPU (officially launching January 9, 2012).

The rumor, stemmed from a few leaked Sapphire documents, claimed that AMD’s high-end 28nm Tahiti GPU may have been a deviation from an older specification, and that the Radeon HD 7970 model actually launched with 2048 stream processors (SPs) distributed across 40 graphics compute units (CUs) instead of being distributed across 32 graphics compute units. The documents implicated that AMD had been hiding eight inactive CUs in its core logic, regardless of the fact that AMD never revealed any images of its Southern Islands GCN architecture on silicon in order to determine if this was true.

Nevertheless, AMD, Nvidia and even Intel have been recognized in the past for creating redundant architectural components on production silicon wafers in an effort to increase chip yields. The process, commonly known as “harvesting,” ensures that the full architectural specification of particular GPU and CPU models is guaranteed across the chip if one section fails to perform. For example, the infamous Nvidia Geforce GTX 480 was a GPU that featured 512 CUDA cores available on the GF100, yet only 480 of them were actively available and the remaining 32 were disabled to achieve higher yields. 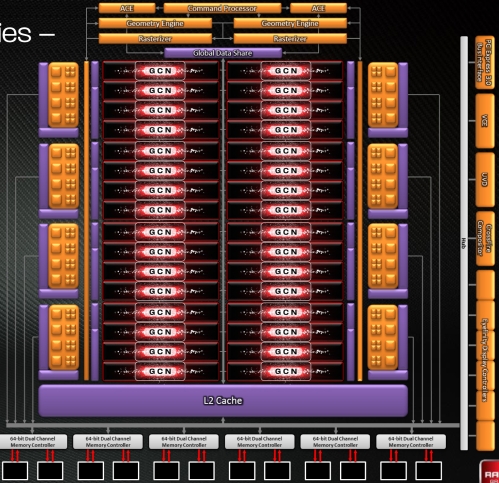 AMD 28nm Graphics Core Next (GCN) architecture, complete with 32 CUs

According to a recent report from our friends at Bright Side of News, AMD has denied any allegations of the Radeon HD 7970 containing more graphics compute units (CUs) than contained in the 28nm Tahiti GPU specification.

Bright Side of News:
"We contacted AMD's representatives such as Mr. Chris Hook and Eric Demers and received a straight answer from the company, represented by Mr. Hook, Senior PR exec:

"There are no hidden cores…'"

All in all, we can be assured that the Radeon HD 7970 has 2048 stream processors distributed across 32 CUs. AMD is dealing with 4.3 billion transistors on this incredibly dense 28nm GPU, and it is illogical to claim that the company’s engineers would harvest an additional hundred million or so transistors on die that would essentially “sit there” and do nothing.