Exploit requires millions of jailbreakers to have developer accounts

In a turn of events that many prospective iPhone 4S and iPad 2 functionality enthusiasts were not hoping to hear, it appears that the long-awaited untethered jailbreak for Apple’s A5-based devices on iOS 5.0.1 has been delayed indefinitely due to legal accessibility issues.

The exploit in question, developed by iOS security researcher pod2g and the iPhone Dev Team, requires the use of an Apple Developer account in order to inject the untethered files into the iPhone 4S and iPad 2. In other words, it would appear that millions of prospective jailbreakers would need to purchase Apple’s annual $99 Developer subscription in order to even have access to this exploit.

Nevertheless, pod2g and the iPhone Dev Team have ruled out this possibility, citing inaccessibility issues to the population at large. Both parties are working hard to find a free publicly distributable exploit that can be used to remount the system partition read/write and help in configuring Corona’s untethered jailbreak files at the appropriate places in the operating system.

In the meantime, updates on the status of this workaround can be found on pod2g’s Twitter account here. 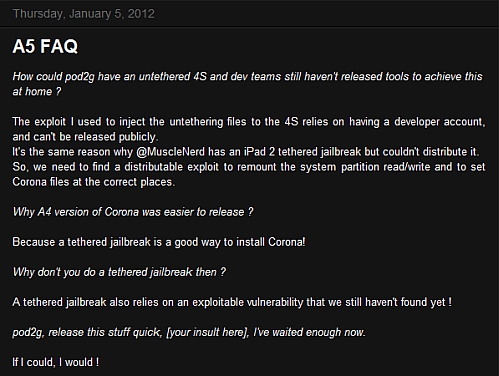 Last modified on 05 January 2012
Rate this item
(0 votes)
Tagged under
More in this category: « Xbox Live Indie guidelines revised Next Xbox to offer DVR functionality? »
back to top