Sony knows that there is a bunch of people waiting for a console's life cycle to end before actually buying it, as that way you get a redesigned console at much lower price. This is exactly what Sony will do with the new Playstation 3 Superslim 12GB that should hit the US on 18th of August.

Although Sony launched the same cut-down version with 12GB of flash memory in other regions last year and noted that same version will not be coming to the North American shores, an early listing spotted by Engadget suggest that Sony apparently changed its mind and same version will be hitting both the US and Canada on August 18th.

Currently the cheapest Playstation 3 that you can buy in the States is the US $269 bundle 250GB version that includes a copy of Uncharted 3 game. The PS3 12GB has its drawbacks as according to earlier reviews, the 12GB of flash memory is "barely" enough for local game installs but those that are familiar with DIY will be able to install their own 2.5-inch HDD.

In case you were holding out for the cheaper PS3 version in the USA, this might be the best way to go. 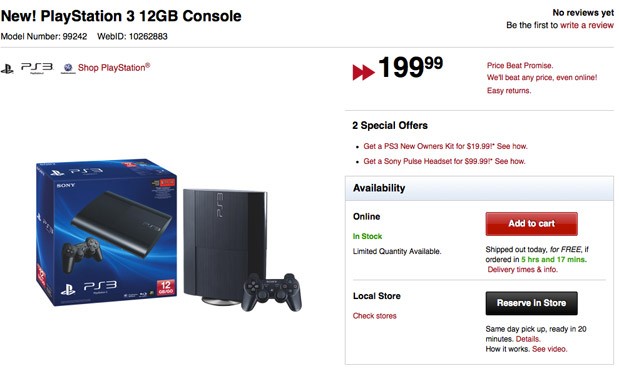 Last modified on 15 August 2013
Rate this item
(0 votes)
Tagged under
More in this category: « Google buys a slice of Lenovo HP enters Chromebox space »
back to top