During its GPU 14 event at Hawaii AMD announced its own answer to Nvidia's Geforce Experience, the Gaming Evolved app powered by Raptr. It does the basically same thing and picks best, or to be precise optimal settings in the game for you current hardware.

It basically uses crowd sources data from users in order to determine the optimal game settings for any hardware configuration which is quite a feat considering how many possible combinations can exist. When installed the Gaming Evolved powered by Raptr app practically detects all the games on the system as well as hardware and resolution. As soon as the game is started, it starts to track FPS and creates a histogram of performance that it combines with all the results on the cloud.

The concept is quite simple as you have one-click button that optimizes settings as well as a slider that lets you control the balance between performance and image quality.

The app is currently available in beta at www.raptr.com/amd and suipports around twenty games but we are sure that AMD will get that number up in no time. 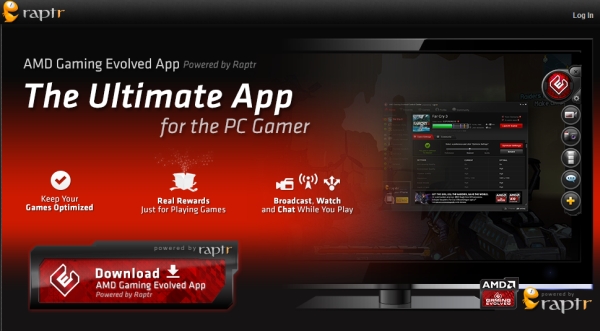