Storage and WiFi in one

WD has decided to add a cool feature to its successful My Passport generation of mobile hard drives. The My Passport Wireless now combines a SD Card reader, USB 3.0 interface and a Wi-Fi connectivity. The My Passport Wireless comes in three sizes, 500 GB, 1TB and 2TB and supports Windows, MAC as well as iOS and Android devices. WD is not the first one to do this as Patriot Memory already has similar device, but WD is definitely the biggest.

The 802.11n wireless interface will let up to eight concurrent users to access data and four users will be able to stream HD simultaneously. The number isn't arbitrary and as to do with the limit of 2.5 inch mechanical HDD that is inside. The My Passport Wireless drive solves a big problem of mobile computing storage as phones and tablets especially the ones from the house of Apple. Apple doesn't have a microSD to let you get more storage and the Western Digital My Passport Wireless solves that problem.

The My Passport Wireless comes with 512 MB of RAM as well as the Cortex A8 AM3352 SoC but doesn't run any known operating system. The WiFi works in MiMO mode with 2x2 Wireless N speeds, USB 3.0 goes up to 5Gb/s theoretically while SD 2.0 works up to 25MB/s depending on the card.

The drive supports streaming to connected TV, mobile phones or tablets, media players, gaming consoles or other DLNA /UPnP devices. You can even use the My Passport Wireless for internet sharing. 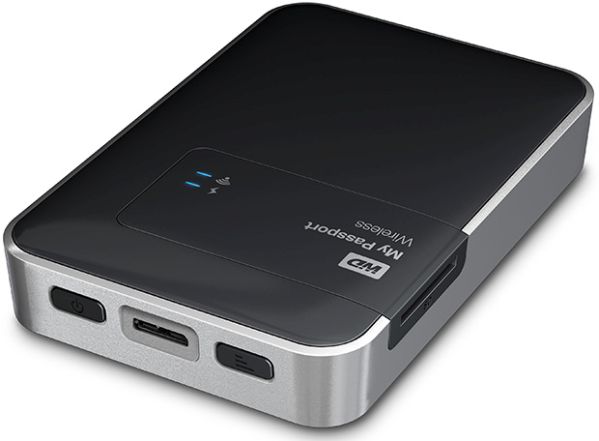 Rate this item
(0 votes)
Tagged under
More in this category: « PC market is down but AMD can grow in it Telefonica plans sell off of Czech unit »
back to top