Industrial PC market should stabilize in 2018 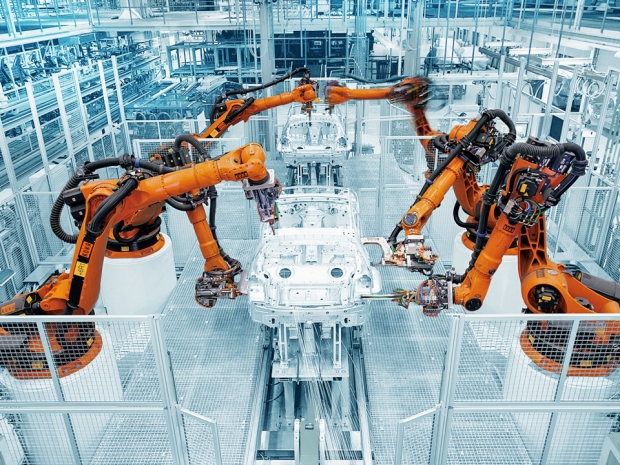 The global market for industrial PCs, those typically used in automation industrial control tasks, is expected to experience short-term growth in 2016 and will begin to stabilize in 2018, according to a new analysis from IHS. The continued use of these PCs in situations outside of traditional automation tasks is cited as the reason for market growth, while robotics continues to be the fastest growing industrial sector for PCs.

According to IHS, global revenue from the industrial PC market is now expected to reach a compound annual growth rate of 6 percent from 2014 to 2019, reaching $4.3 billion in three years. In 2014, Europe, the Middle-East and Africa (EMEA) was still the largest industrial PC market comprising 38 percent of marketshare with $1.2 billion in revenue, while Asia Pacific came in second with $1.1 billion in revenue. These are PCs used in control tasks and are ruggedized to be operated in harsh industrial environments. They typically connect with a nearby controller which enables data collection and submits information to regular office PC systems.

History of industrial revolutions from the 18th century to present (via saphanatutorial.com)

Rita Liu, manufacturing technology analyst at IHS claims that the Asia Pacific market is growing at a slower rate and is expected to fall behind the American market in 2016.

“While the world market for industrial PCs has enjoyed relatively strong growth since 2013, recovery is projected to be slower through 2016,” said Rita Liu, manufacturing technology analyst, IHS Technology. “This slowed recovery is based on poor performance of downstream process-industry sectors in the current economic environment, with very low oil prices, a global downturn in mining, and the like.”

According to a recent analysis from ARC Advisory Group, there are an increasing number of players in the IPC market influenced by a large number of low-cost Asia based suppliers. Some key players currently include Advantech, Beckhoff Automation, Rockwell Automation and Siemens.

Here is an IHS forecast from 2014, where overall market revenues were projected to increase from just under $3 billion annually in 2013 to $4.3 billion by 2018: 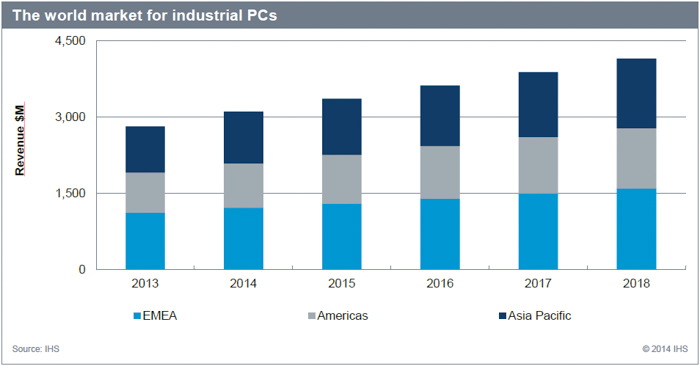 Here is the updated IHS forecast from April 20, 2016, showing market stabilization starting in 2017:

In 2016, robotics is the fastest-growing sector in the industrial PC market, followed by materials-handling, food, beverage and tobacco machinery, and then packaging machinery. The robotics sector includes palletizers, cleanroom robots, welding robots, shelf-mounted robots and high-accuracy robots, among others. Meanwhile, Liu says that “tobacco and packaging machinery are closely connected with consumer markets and enjoy relatively stable performance, no matter what the overall economic situation might be.”

A Technavio analysis from February also projects the global industrial PC market to experience a compound annual growth rate of 10.26 percent between 2016 and 2020. Their report divided the market into the following categories – panels, rack mounts, boxes, embedded boxes, embedded panels and DIN rails with I/O. More broadly, the report concludes that a top trend emerging in the industrial PC sector includes a combination of the Internet of Things (IoT) with Industry 4.0 (the fourth industrial revolution).

Industry 4.0, a collective term introduced in 2011 at the Hannover Fair in Germany for contemporary automation, data exchange and manufacturing technologies