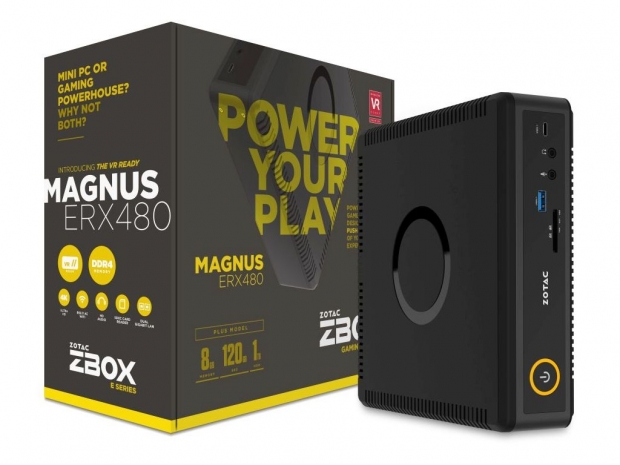 With Core i5 Skylake CPU and Radeon RX 480

Zotac has unveiled yet another VR Ready Magnus mini-PC that will be powered by Intel's Skylake Core i5 CPU and AMD Radeon RX 480 graphics card, all packed in a compact mini-PC chassis, the Zotac Magnus ERX480.

Unlike the earlier unveiled Magnus EN1080 with Nvidia Geforce GTX 1080, which was both larger and liquid cooled, the new Zotac Magnus ERX480 mini-PC is air cooled and a bit smaller, mostly due to the lower TDP of the Radeon RX 480 graphics card. As noted, the Zotac Magnus ERX480 is based on Intel's 6th generation Skylake Core i5-6400T quad-core CPU, clocked at 2.2/2.8GHz and Radeon RX 480 with 4GB of GDDR5 VRAM. The Radeon RX 480 was alone enough for the new Magnus ERX480 to get a VR Ready badge but also gave it access to both AMD Freesync and AMD Eyefinity technologies.

As was the case with earlier mini-PCs from Zotac, the Magnus ERX480 will also be available as a barebone, Plus and Plus with Windows 10 version, with latter one packing a 120GB M.2 SATA SSD, a 1TB 2.5-inch SATA HDD and 8GB of DDR4-2133 memory in a single slot, as well as a Windows 10 OS.

Unfortunately, Zotac did not give out any details regarding the price or the availability date but we will surely keep an eye out for it in retail/e-tail.

Last modified on 04 November 2016
Rate this item
(16 votes)
Tagged under
More in this category: « Why did Istanbul's Internet get the works? Nvidia signs up World Wide Technology »
back to top