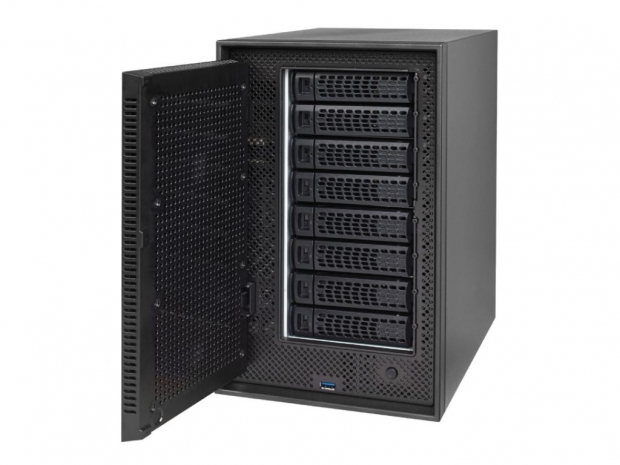 Netgear is equipping users for next generation storage demands.  Faster than ever before, and providing users with the with five levels of unrivaled data protection, 10 Gigabit copper Ethernet (10GbE) network interface on selected models, and expandable storage capacity.

Netgear has updated their ReadyNAS Network Attached Storage product family this week at CES with the RN420, RN520, and RN620. All three products are based powered by Intel technology to bring high-end performance, versatility and scalability.

The entry level Netgear ReadyNAS 420 series is designed with small business needs in mind while offering a high performance, all-in-one file server and automatic backup. ReadyNAS 420 is available in 2 and 4 bay configurations. These new ReadyNAS models are powered by the latest Intel Atom C3338 processor.  Being built around the next generation Intel Atom Processor C3338 allows for high levels of networking throughput, enabling enterprise-grade file sharing and data backup for offices supporting up to 40 employees.

In the mid-rage, Netgear introduced the ReadyNAS 520 series which offers superior performance storage capabilities for up to 80 users.  It supports features such as 10GbE connectivity and superior streaming capabilities for multiple 1K or single 4K streams.  The ReadyNAS 520 is based on the Intel Pentium D1500 processor and is available in 4, 6 and 8 bay configurations. It is a great addition to the ReadyNAS family for growing businesses needing to store, share, and protect their ever-growing amount of company data.

For users that need ultimate performance, the ReadyNAS 620 series is where you should look.  It comes equipped with dual 10GbE connectivity for 4K video multi-streaming and real-time transcoding.  It is powered by a Intel® Xeon D-1521 CPU.  Both 6 and 8 bay configurations are available for a total storage capacity of 80TB or up to 130TB with an expansion chassis.  It easily supports up to 120 users for optimized usage in high-demanding environments such as creative studios, company headquarters, or large branch offices.

Last modified on 07 January 2017
Rate this item
(0 votes)
Tagged under
More in this category: « D-Link busted for inadequate security The next steps for 4K film and broadcast delivery »
back to top