ARM is coming back to mobile devices in a big way 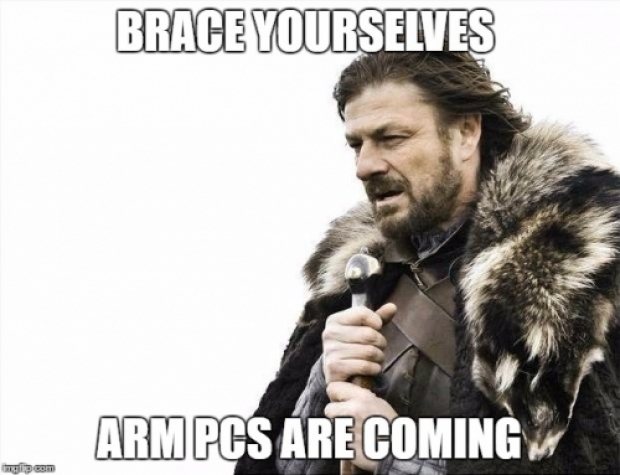 The x86 battle is about to get a lot hotter

Qualcomm is expected to show its ARM goodies at Computex event

A few years ago when Microsoft launched Windows RT alongside Windows 8 back in 2012, it was a version of Windows 8 for ARM chips, and it lacked support for x86 programs. Support for the specialized OS was extremely weak due to the lack of apps for the platform. Enter Qualcomm into the equation and their revolutionary announcement that it’s next-generation of chips would fully support Windows 10, including programs built for the x86 architecture. Since then, there have been a lot of unanswered questions about performance as well as OEM support. It looks like those answers will be coming as soon as Computex this year.

Just in the last week Microsoft announced plans to have Windows 10 use as much native codebase as possible on ARM platform. Since shared system DLLs, and core system components can be optimized for the ARM platform, this should limit the amount of transcoding that needs to occur for applications to run.

After a recent Microsoft recently demonstration we learned a lot more of how both x86 and Universal Windows Platform (UWP) codebase apps would run on ARM chips. It turns out that ARM based systems running Windows 10 will translate all x86 instructions to ARM64 at runtime. Normally this would hinder performance of a system, but the secret sauce is that after the application is launched for the first time, it will be cached both in memory and on the local disk for future use. The end result, according to Microsoft, will be that the transcoding of the codebase will happen only once when the application first runs. These newly revealed optimizations by Microsoft will improve battery live, CPU usage, and performance.

For now what is termed as “neat native” performance a lot of people are viewing as a “wait and see”, but for those of us who are old remember Transmeta are not all that skeptical of the possible performance. We have also been invited to a co-sponsored mixer with Microsoft and Qualcomm during the show and have also been told that Don McGuire, Vice President of Product Marketing and Monte Giles, Director of Product Management at Qualcomm, will be on hand to meet with us in Taipei.

Last modified on 16 May 2017
Rate this item
(0 votes)
Tagged under
More in this category: « iPhone SE 2 backplate prototype surfaces Japanese government tells Western Digital and Toshiba to lower blades »
back to top