We had a chance to see FSC's Graphics Booster, the first and so far only, ATI XGP product to be announced. According to what we have been told the final version of the Graphics Booster will come soon, and it will probably hit retail sometimes in October.

The FSC Graphics Booster comes with the HD 3870 inside and that part will not change in the final product. According to what we have been told, the Graphics Booster works best with this card. As we wrote before, it will connect to the notebook via an XGP connector which is about 3cm wide. The FSC Amilo Graphics Booster will be sold in a bundle with a certain series of Amilo-branded notebooks, obviously those that have the XGP connector. The first in the series is the Amilo SA 3650 notebook based on AMD's Puma platform with AMD Turion X2 Ultra ZM-86 processor and the 780G chipset.

It looks like a great product and as far as we have heard it gives the notebook a great performance boost. The FSC Amilo SA 3650 bundled with the Amilo Graphics Booster comes in October and the retail price should end up around €1300, while the rest of the series should hit retail a bit later, hopefully before the Christmas shopping spree.

Here is a picture of the Amilo Graphics Booster. 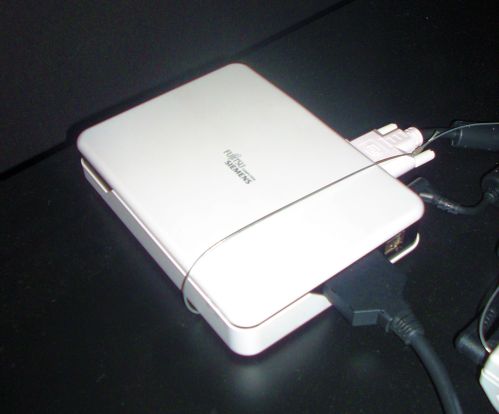 Last modified on 23 August 2008
Rate this item
(0 votes)
More in this category: « Intel is happy about Nvidia´s Ray Tracing Razer launches the new Megalodon headset »
back to top