Many companies are experimenting with new tablet form factors and hybrids. Lenovo is not new to the game, but its new approach is.

The new Yoga tablets feature a rather unusual design. It features a massive cylindrical battery which reminds us of old netbooks with the distinctive 6-cell battery hump at the back. The battery also doubles as a kickstand, thanks to a foldable flap.

You can use the tablet propped up on the kickstand either vertically or horizontally, as a quasi-hybrid with the keyboard cover, or as a regular tablet – in which case the hump doesn’t really look like a good idea as it adds quite a bit of bulk.

The Yoga tablet will be available in two sizes, 10 and 8 inches, but both feature the same spec – a quad-core MediaTek processor, 1GB or RAM and 16GB of storage. The resolution is 1280x800 and you can only get the keyboard cover if you go for the 10-incher. 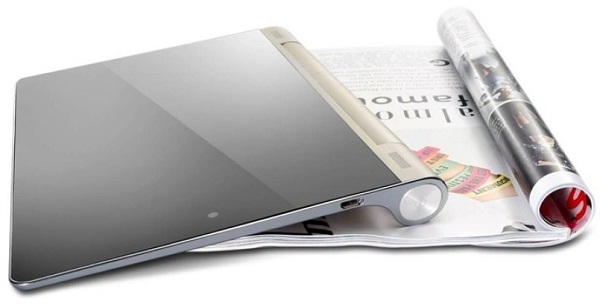 Last modified on 30 October 2013
Rate this item
(0 votes)
Tagged under
More in this category: « Tegra Note 7 to launch November 12 in US iPad reviews are out »
back to top