Qualcomm signs up Amazon and JD.com to Windows 10 on Snapdragon 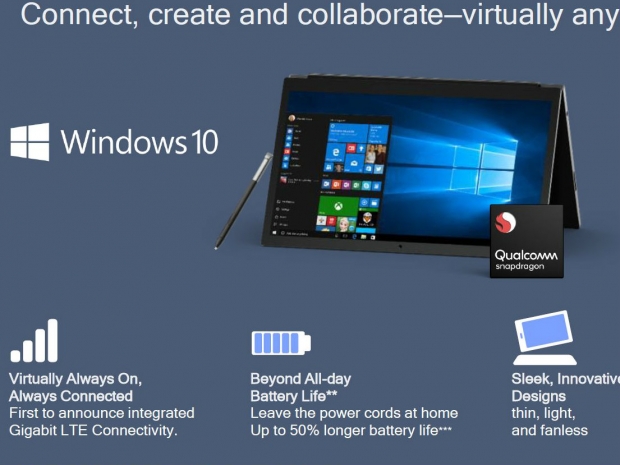 Qualcomm has managed to get industry heavyweights Amazon and JD.com to start selling its Windows 10 on Snapdragon 835 devices. Microsoft will carry the devices in its retail stores too. At the same time, it locked down 10 world carriers to announce the data plans for such devices.

We don’t need to point out how big Amazon is all around the world, and Qualcomm’s devices will definitely be easier to reach for millions of customers. Microsoft will have Lenovo, Asus and HP Snapdragon 835 powered Windows 10 devices in its 135 retail stores in the US. Amazon is not close to Intel’s marketing bucks, or MDF which is how it likes to call its retail program. MDF stands for Market Development Funds, just Google it and you will see what Intel was doing a while ago with the MDF tool against AMD.

JD.com, a channel partner that has close to 50 percent of PC market in China, will carry these devices. Since China is a gigantic country, the online approach works very well for the mainstream market that can afford 2in1 devices with connectivity and incredible battery life.

In the UK, PCWorld's  Dixons will carry these devices and in Italy TIM - Telecom Italia will have these devices in its stores. Qualcomm pointed out that it will pursue the carrier / telecom market and their ability to sell Gigabit LTE 4G connected PCs in their stores. There will likely be more announcements like this in the future.

DACH, Germany, Switzerland, and Austria, will also get a retail presence, but this will be announced at a later date. One can only imagine that this can be someone with very high retail presence in these counties and a few others.

Don McGuire, vice president at Qualcomm, made the good point that customers who buy 2in1 and Always Connected PC with Snapdragon 835 do know what they are getting into. This is not a market for first time PC customers, it will most likely attract customers who already have a few PCs. On the top of our list are people who travel a lot and work on devices with a keyboard that we used to call a laptop. Show off students will definitely be another target group but Windows 10 on Snapdragon might change the normal PC behavior and enable a few days travel, even without a charger.

Connected PC needs a carrier/telco to give service. Qualcomm locked down a few of them which will offer advanced 4G/LTE wireless networks in Asia, Australia, North America and Europe. Select operators also plan to stock Always Connected PCs in their retail locations but this will be announced closer to the launch, probably by the operators themselves.

Expect them in a month or so

Matt Barlow, Corporate Vice President, Windows and Devices, Microsoft, said: “The Always Connected PC combines the connectivity and the simplicity of the smartphone with the power and creative capability of the Windows 10 PC, transforming how we work and play.  In collaboration with Qualcomm Technologies and with the support of these mobile operators, consumers will be able to enjoy up to gigabit 4G/LTE connectivity and stay connected to the things that are most important to them.”

At CES 2018 in January, Lenovo announced the details of its new Always Connected PC, the Miix 630 2-in-1 detachable featuring the Snapdragon 835 Mobile PC Platform and Windows 10. This launch builds on the momentum of Asus and HP, which launched their first Windows on Snapdragon devices – the 2-in-1 convertible Asus NovaGo and the detachable HP ENVY x2 – during Qualcomm’s second annual Snapdragon Tech Summit last December.

The only date we have for Europe and US launch was within a month or two, depending on the country, but Qualcomm officially said you can anticipate these machines in the first half of 2018.

Last modified on 26 February 2018
Rate this item
(0 votes)
Tagged under
More in this category: « Intel 5G PCs ready in 2019 Huawei goes after Apple with MateBook X Pro notebook »
back to top