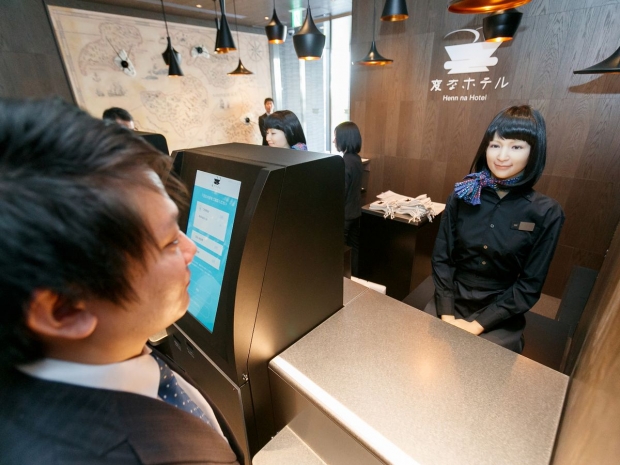 We should never have allowed the AI to watch Apprentice

The world’s first hotel “staffed by robots” has fired half of its robot employees, because they annoy the guests and are not that good at their job.

The Henn na Hotel's multilingual female robots staff the reception desk. Guests are checked in using face recognition. Robot concierges carry your luggage. Robots clean and mix drinks. A voice-activated robot doll is on hand at night while you sleep. All sounds futuristic, but apparently, there are few problems.

The Wall Street Journal reports this week that the robot interpreted snoring as a request it couldn’t understand, and thus woke guests continually through the night, asking them to rephrase.

Two robot luggage carriers are out of use because they can reach only about two dozen of the more than 100 rooms in the hotel. They can travel only on flat surfaces and could malfunction if they get wet going outside to annex buildings. They were slow and noisy, and would get stuck trying to pass each other.

The concierge and the room doll have been removed.

The story highlights the shortcomings of purportedly “state of the art” AI automation that is rarely discussed. One is that they’re installed to solve a management problem rather than a customer need, as was the case here - the hotel is in an area with an acute labour shortage. Secondly, they’re just plain annoying.

As hotel manager Hideo Sadawa explained: “When you use robots you realise there are places where they aren’t needed - or just annoy people”.

Last modified on 17 January 2019
Rate this item
(0 votes)
Tagged under
More in this category: « Alexia started to ignore users Xilinx had a record quarter »
back to top