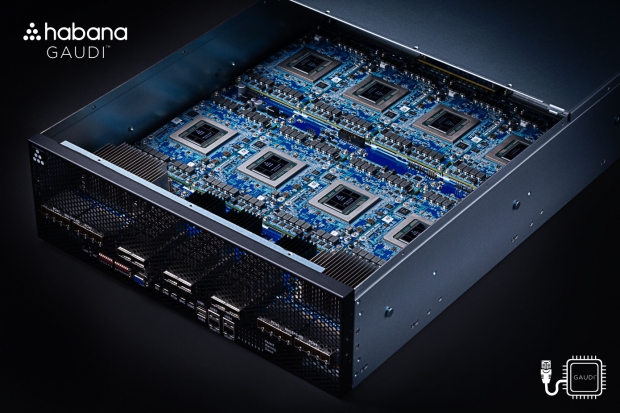 Habana Gaudi is four times faster than GPU based systems

The chip features on-chip integration of RDMA over Converged Ethernet (RoCE v2) functionality within the AI processor. This enables the scaling of AI systems to any size, using standard Ethernet.

The company claims that means that customers can use standard Ethernet switching for both scaling-up and scaling-out AI training systems. Since Ethernet switches are multi-sourced and offering unlimited scalability in speeds and port-count, they are already used in datacentres to scale compute and storage systems.

Gaudi is the second purpose-built AI processor to be launched by Habana Labs in the past year, following the Habana Goya AI Inference Processor. Goya has been shipping since Q4, 2018, and has demonstrated industry-leading inference performance, with the industry’s highest throughput, highest power efficiency (images-per-second per Watt), and real-time latency.

It already has a client in the form of the social networking site, Facebook. Facebook Director of Technology Vijay Rao said that the use of open platforms was an important bonus.

“We are pleased that the Habana Goya AI inference processor has implemented and open-sourced the backend for the Glow machine learning compiler and that the Habana Gaudi AI training processor is supporting the OCP Accelerator Module (OAM) specification”, he said.

Habana will be sampling the Gaudi to select customers in the second half of 2019.

Last modified on 18 June 2019
Rate this item
(0 votes)
Tagged under
More in this category: « Artists test Instagram with Mark Zuckerberg deep fake First customers getting Versal ACAP »
back to top