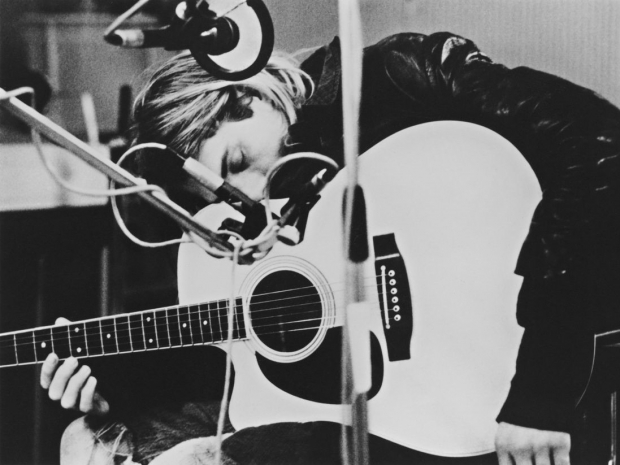 Just makes you want to shoot yourself

On the 27th anniversary of Kurt Cobain's death an AI is attempting to fill the musical gap he made by putting a shotgun to his head.

A mental health organisation called Over the Bridge used Google's Magenta AI and a generic neural network to examine more than two dozen songs by Nirvana to create a 'new' track from the band. "Drowned in the Sun" opens with reverb-soaked plucking before turning into an assault of distorted power chords. "I don't care/I feel as one, drowned in the sun."

Nirvana tribute band frontman Eric Hogan sings in the chorus. It sounds not all that dissimilar from "You Know You're Right", one of the last songs Nirvana recorded before Cobain's death in 1994.

Other than the voice of Hogan, everything you hear in the song was generated by the two AI programs Over the Bridge used. The organisation first fed Magenta songs as MIDI files so that the software could learn the specific notes and harmonies that made the band's tunes so iconic, but really you don’t need AI to tell Nirvana songs were a bit similar.

Apparently, the biggest issue was Cobain's er “loose and aggressive” guitar playing style gave Magenta some trouble.  The AI mostly thought it was just a wall of distortion.

"It was a lot of trial and error", Over the Bridge board member Sean O'Connor told Rolling Stone. Once they had some musical and lyrical samples, the creative team picked the best bits to record. Most of the instrumentation you hear are MIDI tracks with different effects layered on top.

The machine spat out lyrics like, "The sun shines on you but I don't know how" and what is called "a surprisingly anthemic chorus" including the lines, "I don't care/I feel as one, drowned in the sun", remarking that they "bear evocative, Cobain-esque qualities" which is the first time “bad” is associated as being a good quality.

There are some who think that even if the track was made for a good cause the idea of AI churning out a Nirvana single is heresy.  Still, Nevermind.

Last modified on 06 April 2021
Rate this item
(2 votes)
Tagged under
More in this category: « Stop calling it AI says AI expert Another Google AI boffin quits   »
back to top