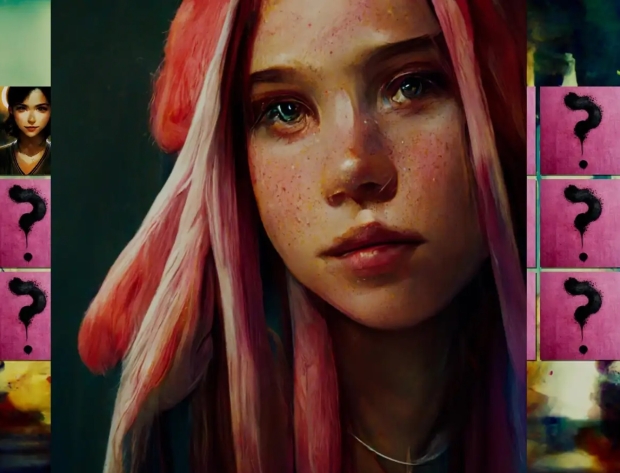 But they are not that great

AI generated games are starting to appear on Steam, but any fears that coders might have to find new jobs filling bags in supermarkets might be a little premature.

This Girl Does Not Exist, a recent Steam game with simple puzzle gameplay. The developer claims that everything, from the art to the story to the music has been generated by AI of some kind. However, that is about the only thing anyone can say positive about the game. It only has one review on Steam, and it’s not positive.

It was created by a married couple, one of whom spoke to Kotaku who said she was optimistic going in, hoping that people would be curious to see the “showcase of modern technology” and that players wouldn’t want to “miss the AI train” that’s sweeping larger online discourse right now.

Making a game with AI-generated assets comes with its own unique challenges, as she tells it. Not having to make art from the ground up does mean things move quicker, but since This Girl Does Not Exist was a dating game, it needed multiple attractive, persistent characters for the player to romance. Each one has their own story, voice over, and imagery. Using the popular image generation AI called Midjourney, it was a lot of trial and error to hit upon prompts that worked, and more trial and error to get usably similar results across multiple iterations.

However AI had some difficulty generating images of the same person, yet in different poses / settings?

"I had to rerun a lot of the commands and try many times until I got out of it a set of pictures which would be the ‘same person.’”

It’s been the couple’s worst-selling game by far, she says, despite having their back catalog containing NSFW games that Steam hides if the user isn’t logged in. And it seems that the unusual way they created the game’s assets was a major repellant for some people.

What was the killer, was the heavy AI angle on the game.

“One [YouTuber] did a livestream but during that livestream, people hated it...not the game, but the AI part,” she explained. “They wrote in the chat stuff like: ‘I feel the AI is gonna take our jobs / crap vibes from the game.’”

She said that if she did an AI game again, she would tell people only after they finish the game and see what would the reactions be.

"I think with This Girl, maybe people had prejudices up front.”

More in this category: « EU prepares to give AI rules Boffins warn that no one could control an AI supercomputer »
back to top