Sapphire is obviously quite keen to keep plugging away at the motherboard market and the company took the opportunity at Computex to showcase a couple of upcoming motherboards. The one that is quite interesting is the Sapphire Pure Black 990FX-N, which is based on AMD's upcoming 990FX chipset and packs a total of five PCI-Express 2.0 x16 slots.

The first thing that caught our attention is the way that PCI-Express slots are placed as it allows for triple Crossfire with some breathing room between the cards. Specs wise, the Sapphire Pure Black 990FX-N features 10-phase VRM and supports AMD's upcoming AM3+ FX Series CPUs. It has four DDR3 slots with support for DDR3 1866+ for some dual-channel action. In addition to the five PCI-Express 2.0 x16 slots, Sapphire squeezed in additional two open-ended PCI-Express x4 slots as well.

The rest of the features include a bunch of USB 2.0 and two USB 3.0 ports, dual gigabit Ethernet, 8-channel audio, eight SATA 6Gbps ports and one eSATA port, integrated Bluetooth. As noted, the new Sapphire Pure Black 990FX-N supports AMD's CrossfireX but unfortunately, it won't support SLI. Namely, Nvidia is restricting SLI licences to those motherboard makers that already had them on previous Intel platforms, and Sapphire isn't one of them.

The new motherboard should be available pretty soon although we still need to wait for those Bulldozer CPUs for some 990FX fun.

You can check out more at Techpowerup. 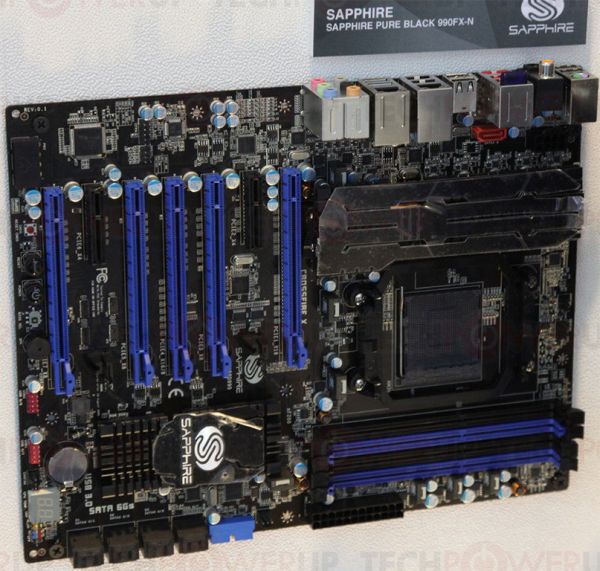 Last modified on 31 May 2011
Rate this item
(4 votes)
Tagged under
More in this category: « Ivy Bridge 22nm on 6 series chipset needs new software Sapphire shows its A75 motherboard »
back to top