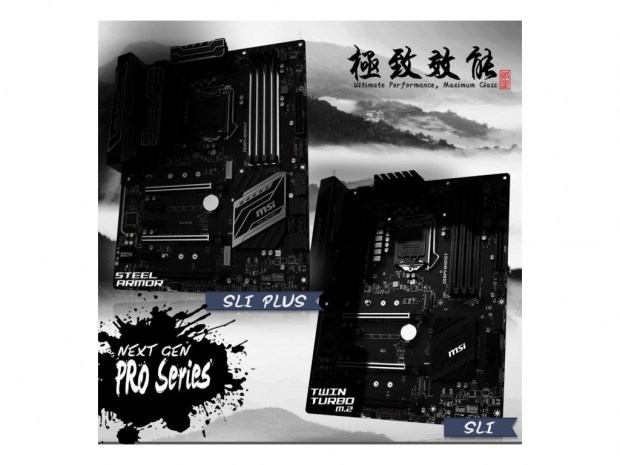 Published by MSI at its official Facebook page, both new motherboards are a part of MSI's new Pro motherboard series, these will feature a black and white color scheme and some high-end features.

The Z270 SLI Plus will be the new high-end motherboard in the Pro series, featuring a 10-phase VRM, drawing power from a 24-pin ATX and 8-pin EPS power connectors. It comes with four DIMM slots and three PCI-Express 3.0 x16 (x16/x8/x8) slots, two Turbo M.2 NVMe ports, six SATA 6Gbps ports and plenty of other features, including MSI's own Audio Boost and Mystic Light RGB implementation.

The MSI Z270 SLI Plus will also feature MSI's Steel Armor on the two main PCIe 3.0 slot as well as both DIMM slots and M.2 slots. It will probably also include MSI's recently detailed M.2 Shield feature that should cool down the M.2 SSD and prevent SSD throttling.

The MSI Z270 SLI is pretty much identical but has a different cooling system, probably without a hefty heatsink on the VRM part and lacking the Steel Armor feature on DIMM and M.2 slots.

Unfortunately, MSI is keeping all the details for the official launch expected in January 2017 alongside Intel's new Kaby Lake desktop CPUs.

Last modified on 06 December 2016
Rate this item
(3 votes)
Tagged under
More in this category: « MSI is bringing M.2 Shield on its future motherboards AMD officially announces its new AM4 motherboards »
back to top